1902 was what one would have to describe as a rather crowded year in world history. Quite a lot happened. In footballing terms, the year was tragically dominated by the first Ibrox Disaster at the Scotland v England International on 5 April when 26 people lost their lives as a stand collapsed when everyone leaned forward to see the “Blue Streak” Bobby Templeton (who would in future years play for Celtic) pick up a cross ball from the right and charge down the left wing! It was an awful occasion, and Ibrox was never again deployed for a Scotland v England International. 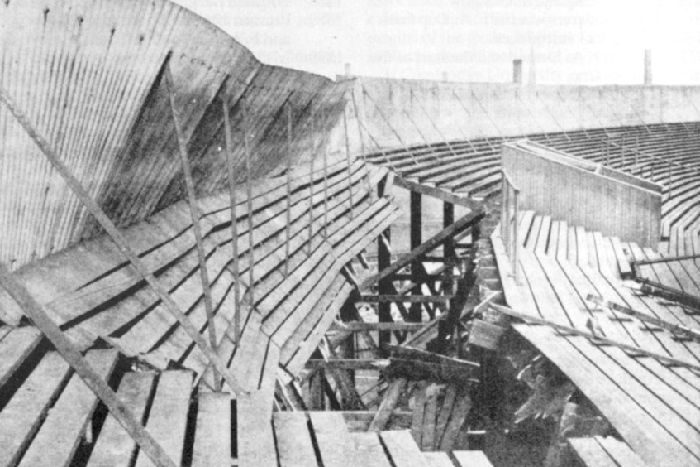 Two national events also held the stage. One was the end of the Boer War, nowadays acknowledged as a disgraceful piece of imperialism or “playground bullying” as the biggest power on earth stole the diamonds of some Dutch farmers. It was however in 1902 hailed as “the triumph of civilization” and glory was given to the politicians and generals who caused such unwarranted carnage with maverick adventurers like Winston Churchill attaining heroic status.

Even more incredible was the lack of protest, even among the Irish community in Glasgow in a city where so many young men were turned down for military service on the grounds of ill health and malnutrition, and where cases of “plague” were still recorded! Yes indeed, the past is a foreign country where people behave differently!

The other national event was the Coronation of King Edward VII. Funnily enough, although his sexual indulgences and general hedonistic lifestyle which included some quite grotesque gluttony were well known, there was still something quite likeable about this old buffoon as distinct from his rather appalling mother whose “spoiled brat” behaviour had lasted well into old age. Edward did at least occasionally give the impression of, now and again, bothering about things like peace and poverty. He did however detest his nephew, the quixotic and seemingly uncontrollable Kaiser of Germany. These royal “Williams” always seem to cause trouble, don’t they?

So where were Celtic in the middle of all this? Not well. 1902 had started with a dreadful game at Celtic Park on New Year’s Day where Celtic might have won the Scottish League (the League in those days was usually finished round about the New Year) and would have done so but for a ludicrous performance by a referee called Mr Nisbet from Cowdenbeath who gave every impression of being drunk. Rangers won 4-2. One of their goals was scored direct from a free kick (which was illegal in 1902), another was yards (literally) offside, and Sandy McMahon that most gentle and scholarly of men was sent off when he slipped on the turf and accidentally collided with the referee! 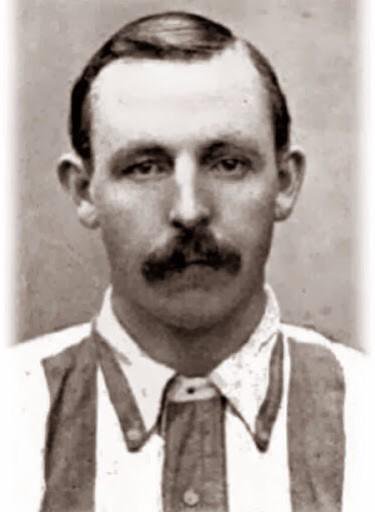 Not the least of Mr Nisbet’s errors that day was that he stopped the game some five minutes early! He would subsequently be suspended by the SFA for refusing to answer “a civil question” at the hearing! McMahon of course was exonerated, but the bottom line was that Rangers (some of whom, to their credit, were embarrassed) won the Scottish League for the fourth year in a row.

There was still the Scottish Cup. Burns Day of 25 January saw a game at Gayfield, Arbroath where “the snow fell like pancakes” (a slight exaggeration perhaps) and Celtic edged through 3-2 thanks to a great 25 yard shot from McMahon. There was then a prolonged struggle to beat Hearts and to gain revenge for last season’s Scottish Cup final, a win in the semi-final against St Mirren and the final against Hibs.

The Ibrox Disaster of 5 April meant that the Scottish Cup final had to be postponed until 26 April as everyone in Scottish football was still in a state of shock. It also obliged the SFA to use Celtic Park, for Ibrox was clearly out of commission and Hampden Park not yet built. A poor crowd turned up on a miserable day in a feeling of anti-climax, and Hibs won their second Scottish Cup through a back-heeler from Andy McGeachan who had allegedly conned the Celtic defence by saying in a Glasgow accent “leave tha ba tae me”! At the end McMahon was fouled by ex-Celt John Divers, but no penalty was given and Hibs won 1-0 in one of the worst Scottish Cup finals of them all.

And that would have been the end of a miserable season for Celtic, but for this trophy which can be called The Glasgow Exhibition Trophy, the British League Cup or the Coronation Cup, depending on one’s preference. Rangers had won the Glasgow Exhibition Trophy in 1901, but decided to put it up again to raise money for the Ibrox Disaster Fund.They also invited Sunderland and Everton to take part.

One of Celtic’s greatest ever games, but one which has been little acknowledged or recorded was the semi-final of this tournament when they beat Sunderland 5-1 at Celtic Park, in the midweek after the Scottish Cup final.

Sunderland were deservedly the League champions of England, but that night in front of a very small crowd of about 4,000 (the Ibrox Disaster and Saturday’s defeat had their effect) Celtic really turned it on with McMahon and Campbell showing that they were far from finished and young Jimmy Quinn, that cumbersome and clumsy looking left winger, playing one of his better games.

Rangers had beaten Everton in the other semi-final and thus it was Celtic v Rangers for the final to be played at Second Hampden, the ground that was now beginning to be called Cathkin. Third Lanark would play there after Third Hampden was built. The final was not played however until 17 June. There had been an enlarged Glasgow Charity Cup that year (with teams like Hearts, Hibs and St Mirren invited and the profits all going to the Ibrox Disaster Fund) in which Celtic reached the final to lose (again) to Hibs on a day of wind and rain at the end of May. The night of Tuesday 17 June, however, was a lovely midsummer night which attracted 10,000 to Cathkin. 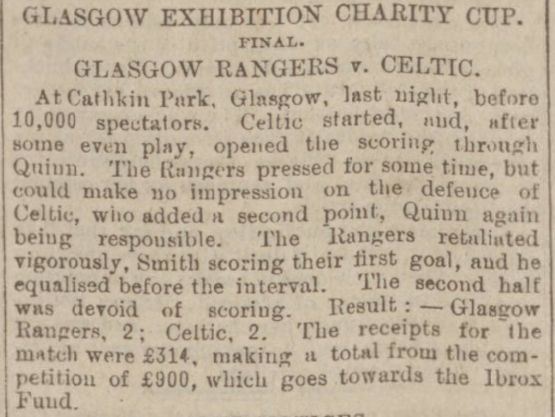 Celtic played Jimmy Quinn in the centre that night. This was because of injuries, mainly, for it took a long time for the penny to drop that centre forward would be the best place for the young man from Croy. He scored twice as the teams finished level.

No-one seems to have decided what was going to happen if the teams drew. Some newspaper reporters clearly thought that that was the end of the matter for many newspapers appeared the following day saying that it was a draw, and that the cup would be shared.

But the teams agreed to play ten minutes each way of extra time. This was looking as if it were a waste of time, both teams being exhausted on such a warm night, but then just at the end, good work by Willie Loney won Celtic a corner. Alec Crawford took it, a bunch of players rose for the ball, and it was the head of the young Jimmy Quinn who scored to complete his hat-trick and to win this all-British trophy which deserves to be mentioned alongside the Empire Exhibition Trophy of 1938 and the better known Coronation Cup of 1953. 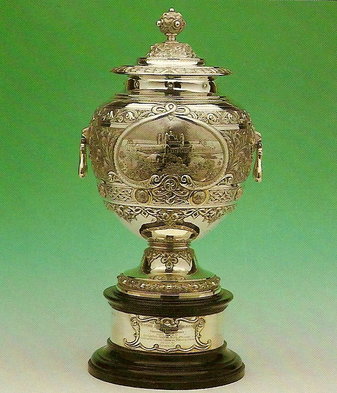 It was actually much prized by Celtic supporters at the time – for there was little else to be happy about – and the young, shy miner from Croy was much lauded. Celtic tended in those days to do their training at Rothesay, so it was appropriate that the tune “The day we went to Rothesay, oh” was used to commemorate this game.

“Some say that Rangers are guid at fitbaw

That Speedie and Drummond and Robertson are braw

But Jimmy Quinn, he diddled them aw

At the Glasgow Exhibition, oh!”

And discerning supporters saw that there might be quite a future for this young man! But there was a certain worry about the future of King Edward VII who went down with a form of appendicitis on the eve of his Coronation a week later. The Coronation had to be postponed until August, but Celtic supporters were all for crowning King James instead. And yes, they always had been in favour of crowning King James for the past two hundred years or so, but this was another one.

This one lived in Croy!

“If they’re available, then we’ll move for them”, Ange on squad additions
“If this transpires then it’s a remarkable deal for Sky”. “From a business POV, it’s madness”
The Celtic Graves Society to Commemorate former Celtic player and director Mick Dunbar

The Celtic Graves Society to Commemorate former Celtic player and director Mick Dunbar
So just who were the Class of ‘55? Matt McVittie’s Celtic Story
John Hughes Tribute – Celtic did what Muhammad Ali had done and “shook up the world”
Previous ArticleNothing in Tsukasa Morishima link, Jordan Larsson clickbait, Ryan Mmaee’s injury
Next Article Testing the water for Peter Lawwell’s possible return as next Celtic Chairman