The 2013/14 season had Steven Mouyokolo as a bit part player towards 9IAR and the 2014/15 season featured Aleksandar Tonev. Following Ronny Deila’s arrival at Celtic, it appeared that the Scottish Champions were in the process of downsizing with Fraser Forster, Georgious Samaras, Beram Kayal and Tony Watt all sold with Stefan Scepovic the only player brought in for a fee in the summer window.

Aston Villa and Celtic agreed a season-long loan for Bulgarian international Aleksander Tonev. Tonev arrived and made his debut versus Aberdeen at Celtic Park in a fierce 2-1 win for Ronny Deila’s side.

However, in the aftermath of the game, Shay Logan alleged that Tonev had racially abused him during the match.

Tonev denied the allegations and the tribunal accepted Logan’s testimony handing down a seven-match ban for “using abusive language of a racist nature”. Tonev appealed but this was denied all the while maintaining his innocence.

Celtic stuck by the player despite the decision and as he was an Aston Villa player could have cut ties as this decision would effectively end his career. Recruitments came in January and Tonev fell further down the pecking order. 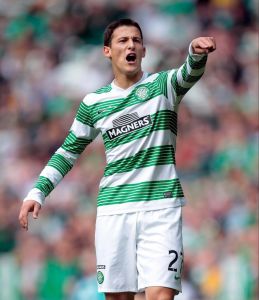 With Gary Mackay-Steven and Stuart Armstrong arriving, Tonev’s games were limited further until he got the chance in the Scottish Cup semi-final versus Inverness CT. Unfortunately for him, and Celtic, Inverness won the match 3-2 despite Celtic being denied a penalty at 1-0 for a clear handball which would have won the match.

He left the club at the end of the season as Celtic decided against exercising the option to buy. Tonev departed as a part of the four-in-a-row title winners and played a small part in the club’s success that season with 13 appearances in all competitions.

Tonev now plays for Bulgarian side Botev Plovdiv after having the cloud of racial abuse hanging over him ended his career in the UK.

Previous ArticleVideo: Unseen footage from before the Treble Treble Final
Next Article Cesar and Celtic – A first Cup Final for Billy