In August 2011, Celtic paid £2.2m for the Sierra Leonean striker from Swedish side AIK amidst rumours that Henrik Larsson had tipped the club to sign him.

Bangura arrived saying he wanted to ‘follow in Larsson’s footsteps’ and see where the move would take him, mentioning moves to England and Italy before he’d kicked a ball for Celtic.

Neil Lennon looked to the young striker to break into the team and compete with the formidable trio of Stokes, Hooper and Samaras. However, Bangura never got near them.

In his handful of appearances, Bangura appeared to struggle with 16 appearances and just one assist to show for it. Not the efforts of a star striker destined for the top.

Bangura’s season was ended abruptly by a knee injury but he was part of the squad that won the first title of Celtic’s 9IAR. 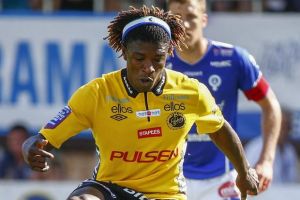 The 30-year-old is now plying his trade for Akropolis IF in the Swedish third tier. Following his departure from Celtic, a move to Turkey and China, with a return to Sweden sandwiched in between have Bangura three clubs in three seasons.

Since returning from Dalian Yifang in 2017. Bangura has slipped down the Swedish leagues where he now plays with Akropolis.

Previous ArticleVideo: Virgil Van Dijk celebrates Celtic’s 9IAR
Next Article Ghirls in Seville – “We have assets other than financial ones, £200 and a flash for a ticket!”