We can all cast aspersions on much of what happened today but when push comes to shove we all played our part.

The starting line up saw the exclusion of Olivier Ntcham and as much as he’s a fine footballer is he really a player you can trust?

Ntcham is capable of turning in a nine out of ten performance one week and just as likely to produce a three out of ten just a few days later. So far in his Celtic career Ntcham has nailed down one slot. The number 12. What happened today was not down to the benching of Ntcham, it went far deeper.

Lennon didn’t drop Paul McStay he dropped a player to the bench who to date hasn’t proved himself indispensible. For every Lazio there is a St Mirren away or Hibs at Easter road. As such the decision to play Christie at 10, Forrest wide right and bring in Mikey Johnston to the left made sense, if for no other reason than the balance of the front three supporting Edouard was in sync.

The decision to add Mikey Johnston hot on the heels of a five year deal made sense; tactically it was a wise move, before the benefit of hindsight of course.

What was evident from the kick off was that Celtic was sluggish. Against an opponent bereft of genuine creativity the ability to match the industrious nature of the opponent was going to be vital.

Scott Brown aside in the middle of the park we lacked that thought process. Match what they offer and let the creativity take hold. In the absence of the creativity coming to the fore we would then at least be able to go toe to toe. From there what would be would be. We sadly didn’t match the energy and work rate of our opponents. Therein lay the reasons for today’s defeat.

There was of course more to it. The formation looked incapable of matching up, but was it the formation? The same approach had won at Ibrox in September after all. Was it simply the way the team was set up or was there more to it?

Let’s start from the front. The first touch of the Celtic striker saw the ball bounce off French Eddy like a five year old learning to trap a football in the back garden. From that point on Odsonne Edouard looked lost, fatigued and frustrated. That will of course be the excuse but could it be mental as well as physical? Whatever way you look at it the man leading the line had an off day-an off day. That is entirely forgivable but it hurt the game plan.

Behind him Mikey Johnston may well play the fall guy but despite his physical limitations he tried. He was one of the few players who got behind the opposition defence. Both his central and right sided cohorts were found more wanting than Mikey Johnston. 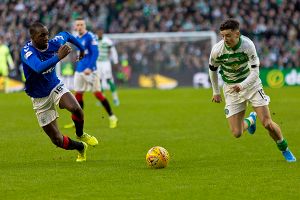 James Forrest was simply anonymous today. He has more than enough in the bank to be forgiven however his inability to act as an attacking foil or defensive cover for Jeremie Frimpong was a dereliction of duty.

Ryan Christie in the number ten position found himself bereft of ideas. It seemed every time he received the ball he felt the need to turn and face up ‘the’ Rangers defence. The ten role is as much about turning into play as it is facing up your opponent. When you are playing at the margins of the game it is just as important to keep the play linking rather than forcing the issue. Today Ryan mastered none of that.

Dropping deeper both Brown and McGregor looked overrun but Brown was Celtic’s best player for me. He and Ajer were the two players I’d give full marks to with Calmac not far behind.

Indeed McGregor played far more advanced than would have been the game plan. He was trying to urge Christie, Mikey and Forrest into the game. His endeavour often left Brown exposed but I’d say Brown afforded Calmac that licence just to try and force the play forward.

At the back came the issue. Forced back due to the sluggish nature of the attacking midfield, Brown was now left exposed. The Captain was trying to deal with ‘the’ Rangers industry and for once he couldn’t cover the onslaught from central midfield and slot in to help his full backs. 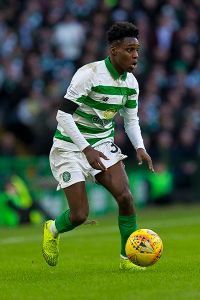 Frimpong coped with this more than admirably. Sadly from the first whistle to the last Bolii Bolingoli as a defensive full back and as attacking outlet was found wanting.

I am far from willing to hang any Celtic player out to dry but the fact of the matter is Boli has height, he has energy and stamina. He lacks however the nous to play the full back role. It is time we gave Greg Taylor the chance. Give him the opportunity to show he can add attacking quality to his game. One thing is for certain he is at least a defender.

And talking of defenders, we come to Ajer and Jullien. The defending from open play was no problem at all to the pair. The defending of set pieces from both players alongside Fraser Forster was pitiful.

From the outset ‘the’ Rangers tried to take advantage. Much like the Cup Final the diagonal passing was designed to leave the full backs defending and render them exposed.

On many occasions ‘the’ Rangers looked to win the fouls down the sides. Be it from free kicks or corners their tactics worked. It is clear their approach was to isolate our central defenders and goalkeeper. It worked.

The second ‘Rangers’ goal was evidence of it. Ajer and Jullien are good defenders from open play. In Dubai the pair of them and Forster has to find a way of coping with set piece deliveries. 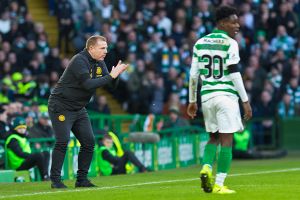 Forster has to be that third defender from wide deliveries. A shot stopper of the highest order he is. For a man of his size he has to come off his line, he has to catch or punch, either way he has to support his central defensive partnership. If that lack of involvement is a confidence issue then it has to be worked on during the winter break.

And then we drop deeper. We drop down to every one of the Celtic support. Today the supporters were every bit as culpable as those players on the park. For a Glasgow Derby, the fact was it was played out to an atmosphere akin to a home game against Aberdeen, it was reactionary when our reputation is to be pro-active. As supporters we ask every inch of our players. The least they can expect is that the supporters follow suit. For a derby encounter we were found as wanting as the players themselves.

Over the next few weeks we can all find holes. Be it in defence, midfield or in attack. Today those gaps were just as evident within the support. 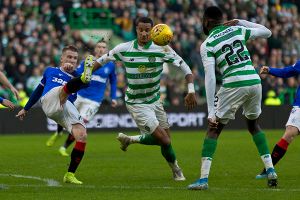 We were waiting to react. The Celtic support was every bit as passive as the team’s performance.

As much as the players did not impose themselves on the game. Nor did the support. We all take responsibility for today. We can’t take nine in a row for granted. We need to show we are all in this together.

All is not well. We saw this with the lap of honour around Celtic Park. Both Ntcham and Edouard headed up the tunnel. Frustration was evident.

When January comes unity must return. The Bookies still have Celtic as favourites by the way.

‘Celtic 1 the Rangers 2 – Not the end of the World, we are all in this together,’ David Potter…see HERE.

Outfoxed and We Saw it Coming…see HERE.