You are at:Home»Latest»On This Day, 7 Years Ago – League Cup shock as Morton stun Celtic

It was on this day, 7 years ago, that Morton made headlines as they stunned the champions of Scotland in their own back yard! That dramatic extra-time penalty, thumped home by Dougie Imrie, will be forever etched in the minds of the 2,000 Morton fans who made the trip to Celtic Park. Few could have foreseen what lay in store as they made their way along the M8 that evening, but what a night it turned out to be for the club and the town of Greenock as a whole. 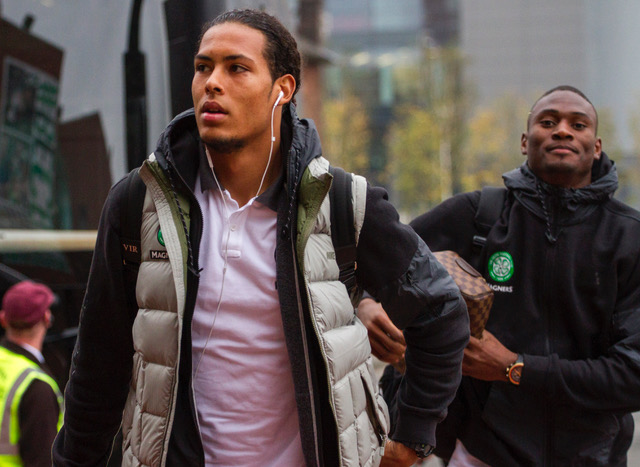 Morton went into the match as rank outsiders, positioned second bottom in the Scottish Championship. By stark contrast, Celtic were unbeaten domestically and had their eyes firmly fixed on the League Cup trophy.

With the top tier of the stadium closed, and the rest of the stadium sparsely populated, it was as if a lacklustre feeling almost transmitted itself to the Celtic players. However, with a multi-million pound team on the pitch, the Hoops always pose a threat and it was a great credit to Morton that their resolute defensive work enabled them to go into the half time break with the score level at 0-0. 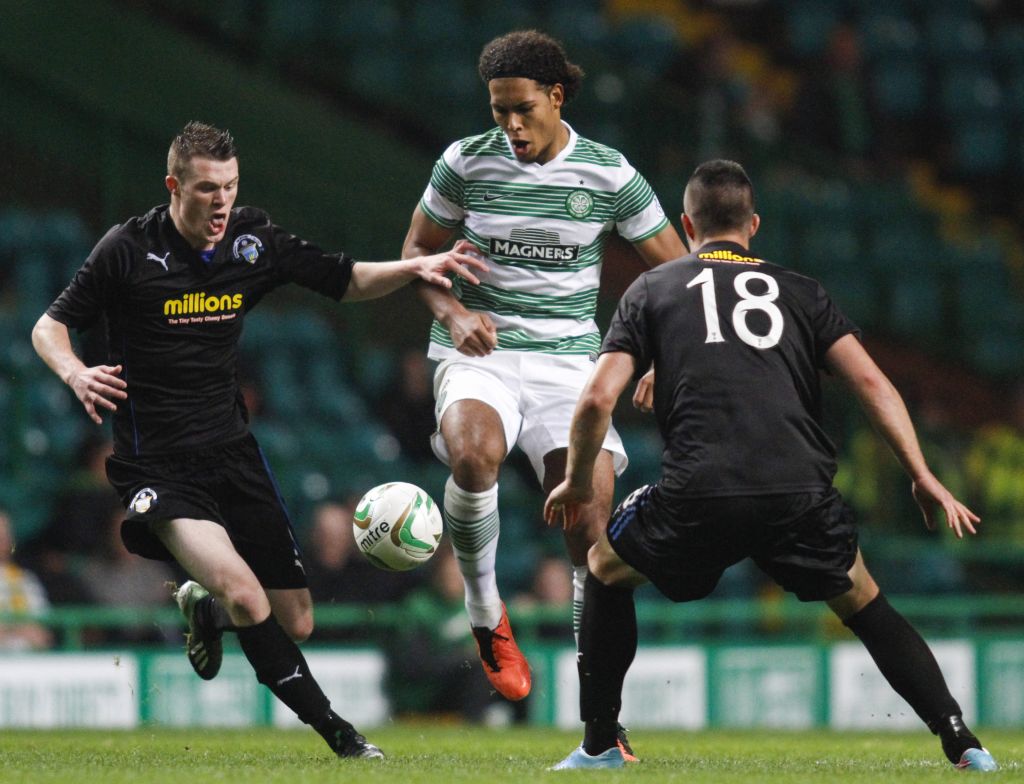 24.09.2013 Glasgow, Scotland. Virgil van Dijk brings the ball down under pressure from Dougie Imrie and Tony Wallace during the League Cup third round game between Celtic and Morton from Celtic Park.

The second 45 began in similar fashion, Celtic controlling the ball, but much of the play being in front of the Morton defence. That said, Scottish international Charlie Mulgrew, went close with a free-kick which was tipped away for a corner by Ton’s French goalkeeper, Nicolas Caraux.

Having defended no less than 27 corners, dogged Morton took Celtic to extra-time. They had offered little threat themselves, but Imrie’s penalty was all they needed. Indeed, five minutes into the extra period, the Morton midfielder scored from the spot after referee Bobby Madden adjudged Celtic defender Efe Ambrose to have handled when challenging substitute Archie Campbell.

The goal sprung Celtic into life and they pounded the Morton defence in an attempt to draw level. Morton defended stoutly and survived a late scare when Charlie Mulgrew hit the post in the dying seconds. Moments later the full-time whistle sounded, and the away end erupted in a cacophony of joy. 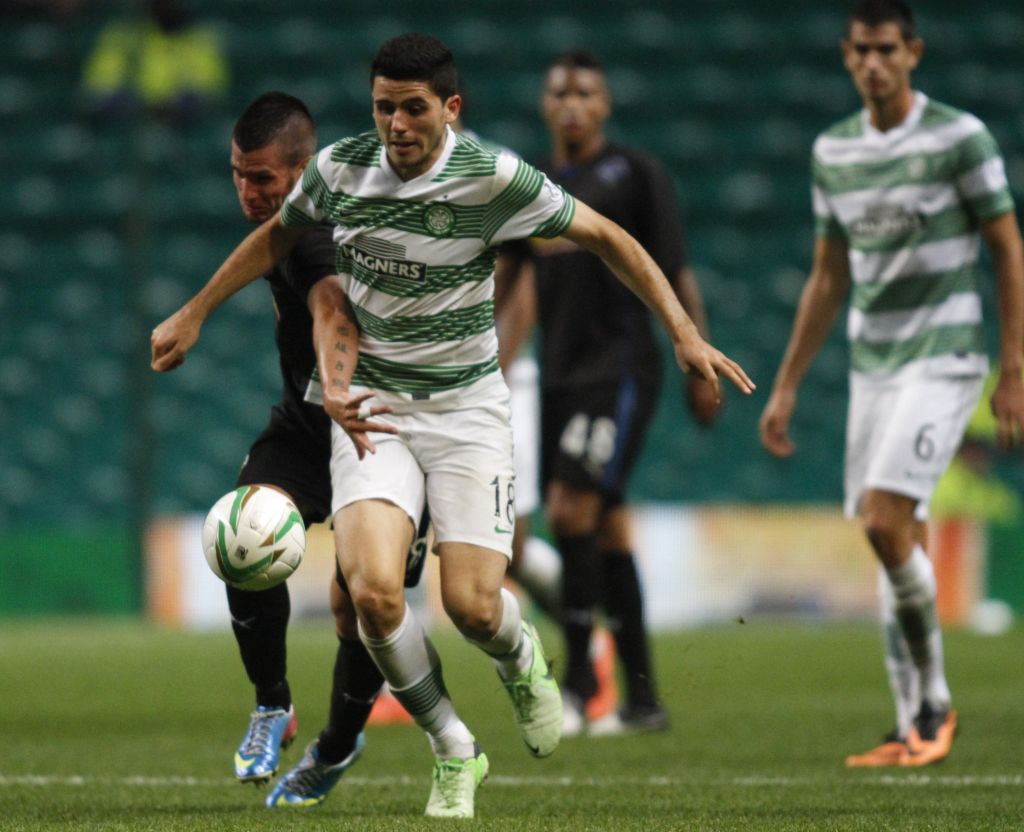 24.09.2013 Glasgow, Scotland. Tom Rogic is held back by Kabba Cham during the League Cup third round game between Celtic and Morton from Celtic Park.

Celtic manager Neil Lennon had noted before kick-off that he had not yet won the League Cup as a manager and he was made to wait at least another year.

The result marks one of the finest in recent Morton history and, whilst Virgil Van Dijk could win the Champions League, he couldn’t get the better of lowly Greenock Morton! Let that be a reminder to fans of how easy it is to have an off day and crash out of a cup competition. As we stand on the brink of a quadruple treble, it is absolutely phenomenal to think what we have achieved. 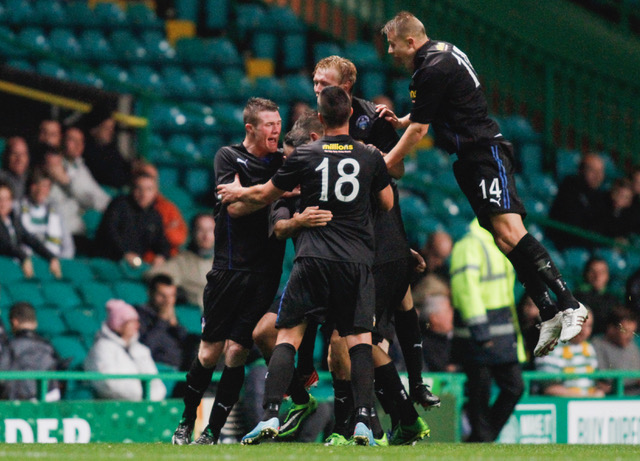 24.09.2013 Glasgow, Scotland. Dougie Imrie celebrates his goal during the League Cup third round game between Celtic and Morton from Celtic Park. 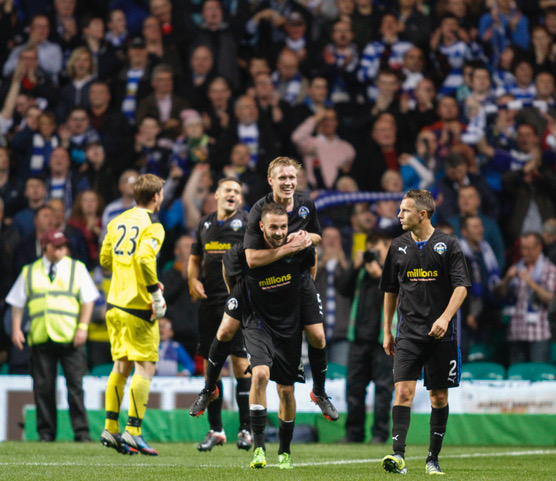 24.09.2013 Glasgow, Scotland. The Greenock Morton players celebrate their victory in front of their fans after their shock victory during the League Cup third round game between Celtic and Morton from Celtic Park. 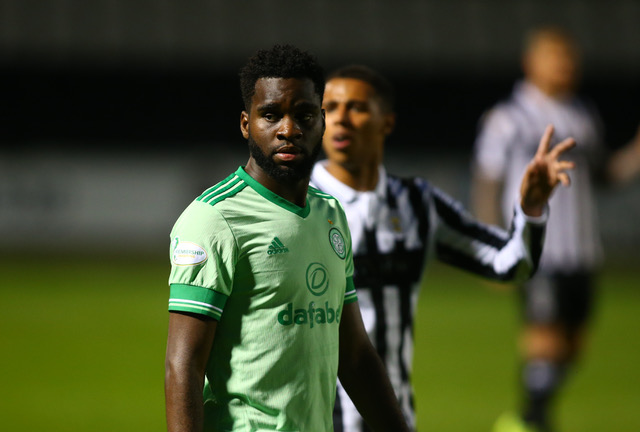