You are at:Home»Latest»A wonderful, magical Celtic Star is born at Tynecastle

In the midst of the qualification process for the Champions League, Brendan Rodgers had faced his first domestic challenges as manager of Celtic.

The quest for six-in-a-row began in Edinburgh, the opening League fixture seeing the Hoops travel to Tynecastle on Sunday, 7 August 2016, four days after Moussa Dembele’s late winner against Astana. The big French striker came in to replace the injured Patrick Roberts, partnering Leigh Griffiths up top as Rodgers went with a 4-4-2 formation. Kolo Toure made his first start, beside Eoghan O’Connell. 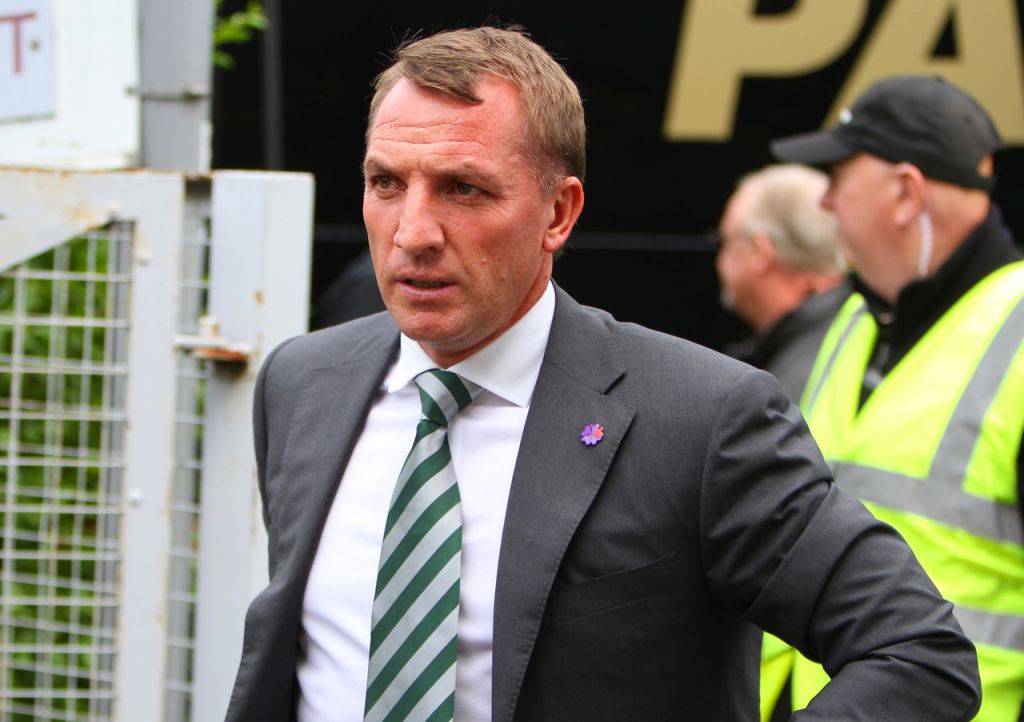 The previous day, Brendan Rodgers had finally got his man, Scott Sinclair signing in a £3.5m transfer from Aston Villa. It had been a whirlwind 24-hours for the 27-year-old Bath-born winger, having undergone a medical before putting pen to paper on a four-year contract. Scott had previously worked under Rodgers at both Chelsea and Swansea, the latter spell seeing him top the scoring charts as the Welsh side secured a place in the English Premier League five years earlier. Sinclair said that he had “played my best football” at the Liberty Stadium, as he looked forward to a new life in Scotland.

“It feels amazing to have joined Celtic. It’s a massive club and I’m happy to be here. I can’t wait to get on the pitch. When I went back to Aston Villa for pre-season, I heard Celtic were interested and I just knew I had to come here. I had to look at this move, and I thought it would be great for me. And because I know the manager and I know what to expect, hopefully, I can get off to a flying start.” 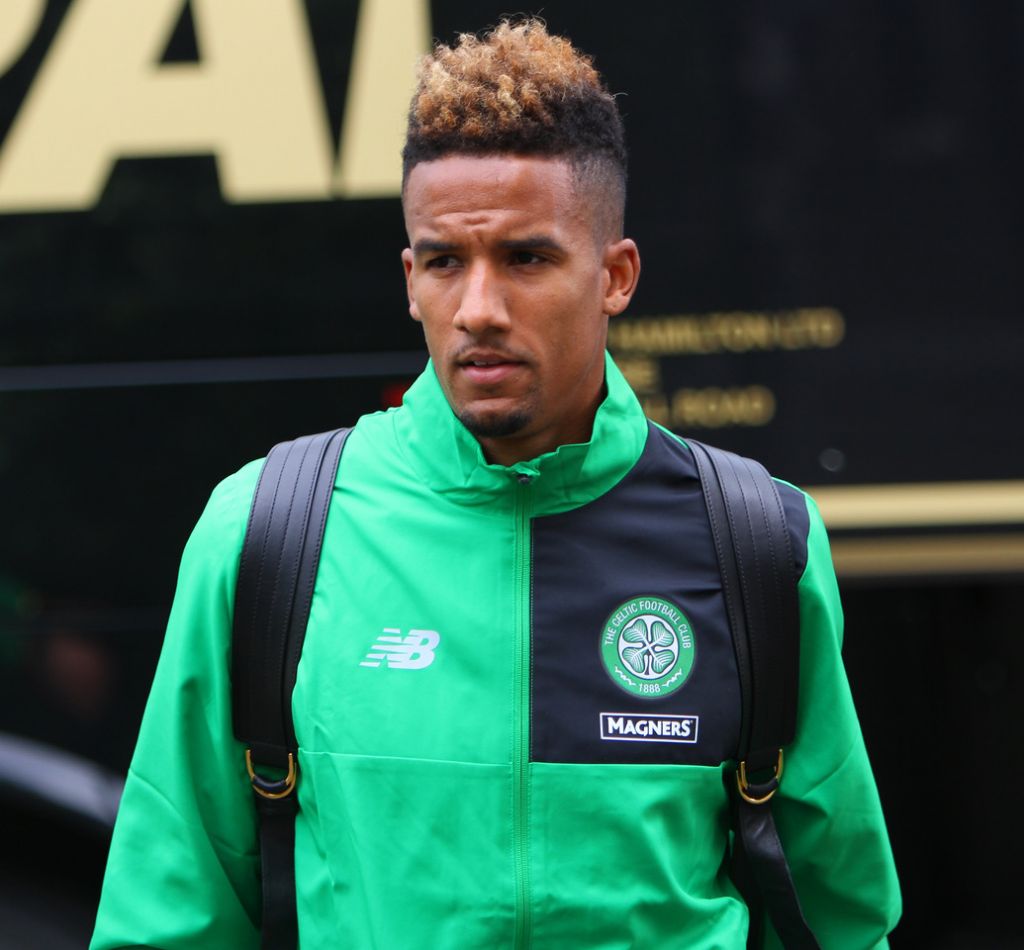 “I had him in at Chelsea when he was 16 years of age. I know him probably as well as anyone and I know his qualities.”

Scott Sinclair would start on the bench at Tynecastle but there was a notable debut in the Hearts line-up, Tony Watt, dining out forever on THAT GOAL against Barcelona almost four years earlier, the big striker hoping that he would find that elusive consistency with Robbie Neilson’s side. I did too. Just not today, Tony. 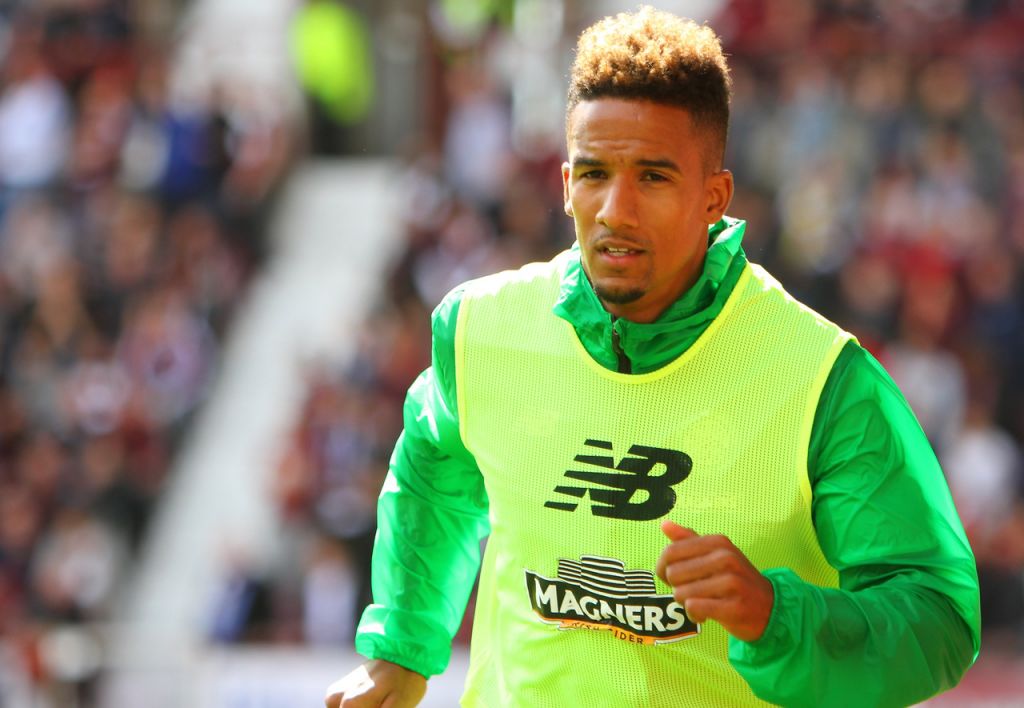 Celts were on the front foot from the kick-off, in front of 17,000 spectators in the noisy cauldron of Tynecastle. And the Hoops struck first after just eight minutes, Callum McGregor’s run blocked by a defender, perhaps illegally, but the ball falling kindly for James Forrest, who curled a delightful left-foot shot past Jack Hamilton in the home goal for 1-0. Replays would later suggest that the lurking Stuart Armstrong was interfering with the goalkeeper’s line of sight from an offside position. I would certainly be claiming it. It was a real let-off for Celtic.

In the space of a minute midway through the first half, there were two incredible missed chances at either end. First, Tony Watt rose to meet a cross from the right, which had taken out Craig Gordon, only to head wide of the open goal. Then a long ball beat the leap of John Souttar to send Leigh Griffiths through with only Hamilton to beat, his cute left-foot lob doing just that but drifting inches wide of the post.

Ten minutes before the interval came the major talking point of the match, as Jamie Walker spun then fell to the ground at the edge of the box, Kieran Tierney in close proximity but having made no contact. To the horror of the Celtic players and support behind that goal, referee John Beaton pointed to the spot. A calamitous decision. Nevertheless, Walker picked himself up and calmly slotted the ball home, with Gordon choosing the wrong corner.

The postscript to this incident is that Walker was given a two-match ban for simulation, however, as in all of these cases, the goal stood, and the suspension would be of no benefit whatsoever to Celtic. The final chance of the half fell the way of the visitors, Moussa Dembele’s shot blocked but Griffiths first to react, his shot beating the keeper before being acrobatically cleared on the line by Igor Rossi, whose timely intervention saw the teams going in level at 1-1 at the break. 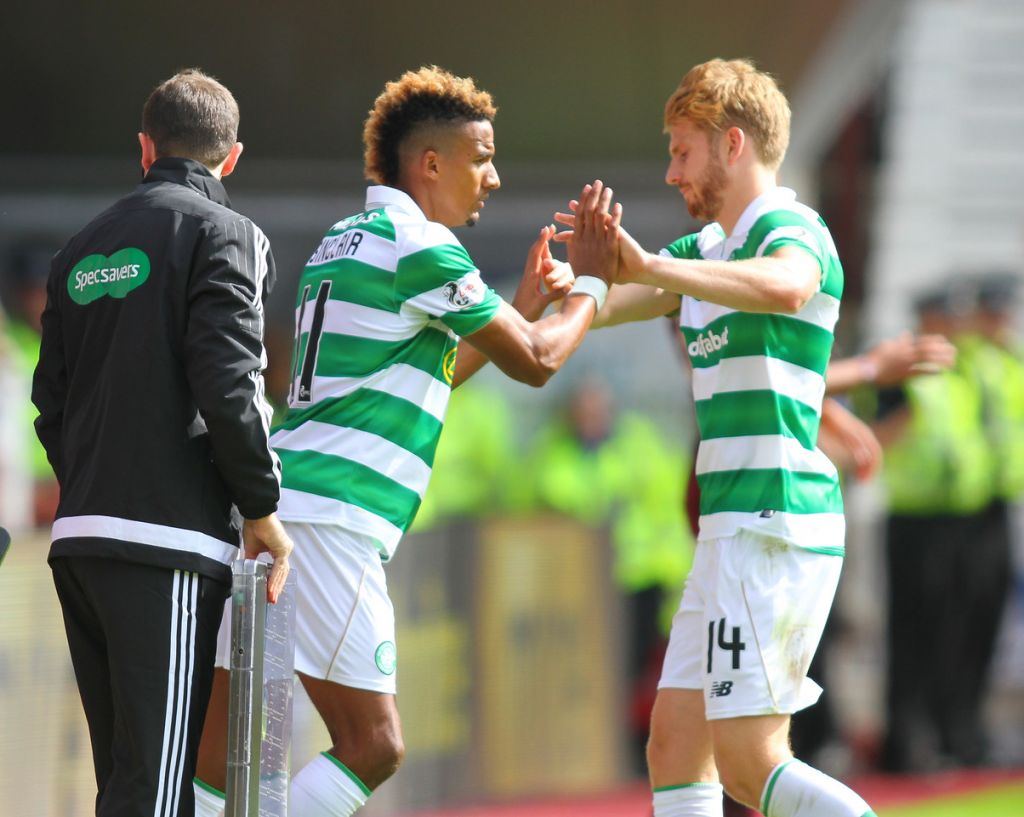 With an hour on the clock, Rodgers made a game-changing substitution, Scott Sinclair replacing Stuart Armstrong, a second change following within minutes, Tom Rogic coming on for Eoghan O’Connell as the Celtic manager moved to a back three.

With 10 minutes to play, Hearts were enjoying decent possession and had forced a corner. Sixty seconds later, it was 2-1 Celts, a lightning break from defence owing much to the pace and control of Leigh Griffiths, leaving two home defenders for dead down the left flank before pitching a wonderful low cross into the box. Sinclair had burst a gut to match the striker’s run through the centre, timing his own entry into the box to perfection to meet the ball first-time with his left-foot to slide it past Hamilton for the match-winning goal. 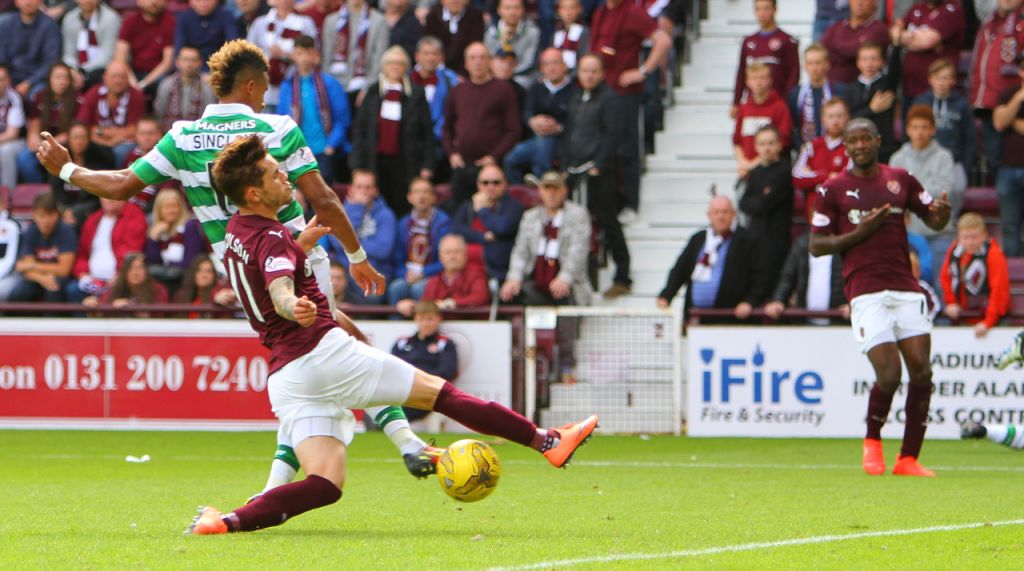 As dream debuts and impacts go this was right up there, the Hoops fans packed behind the goal joyfully engulfing their new hero. A Celtic Star was born at Tynecastle that day, as the march towards the six began with a win. 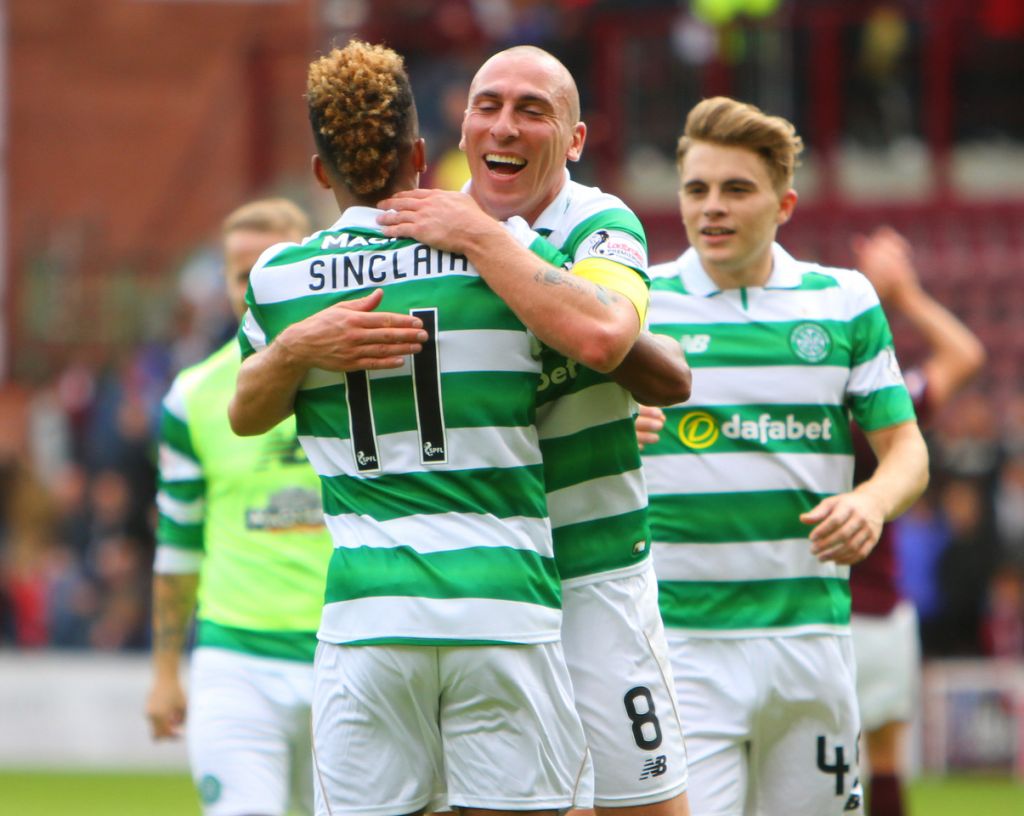 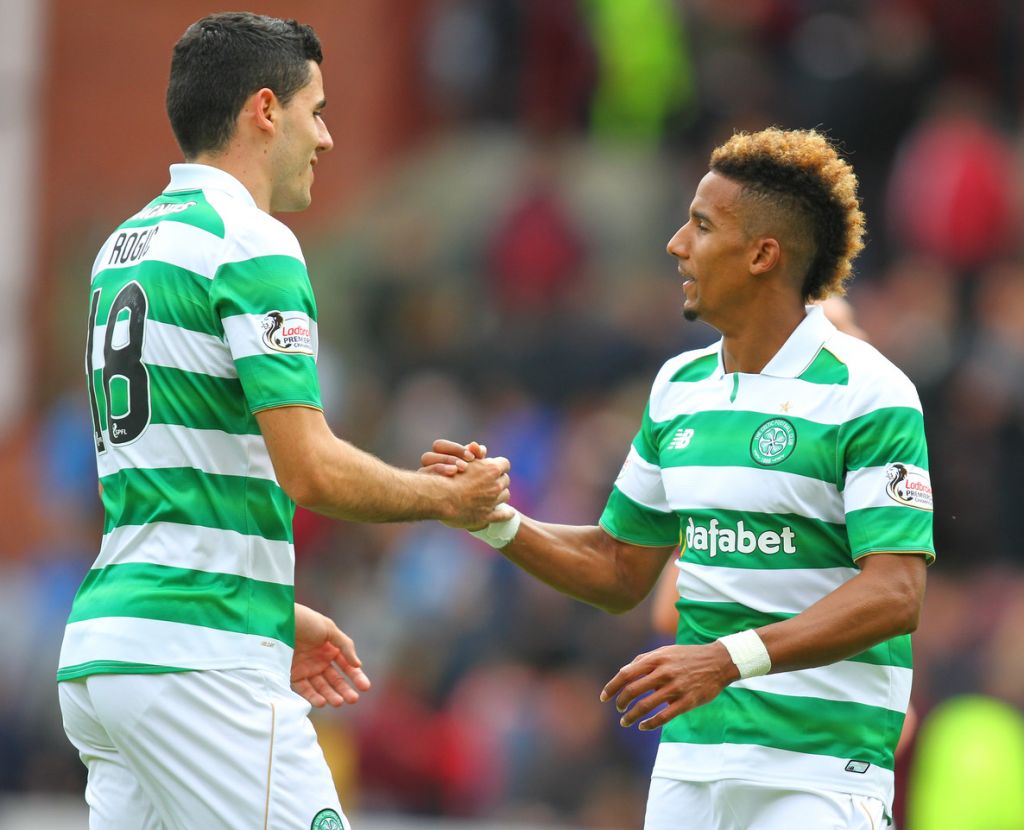 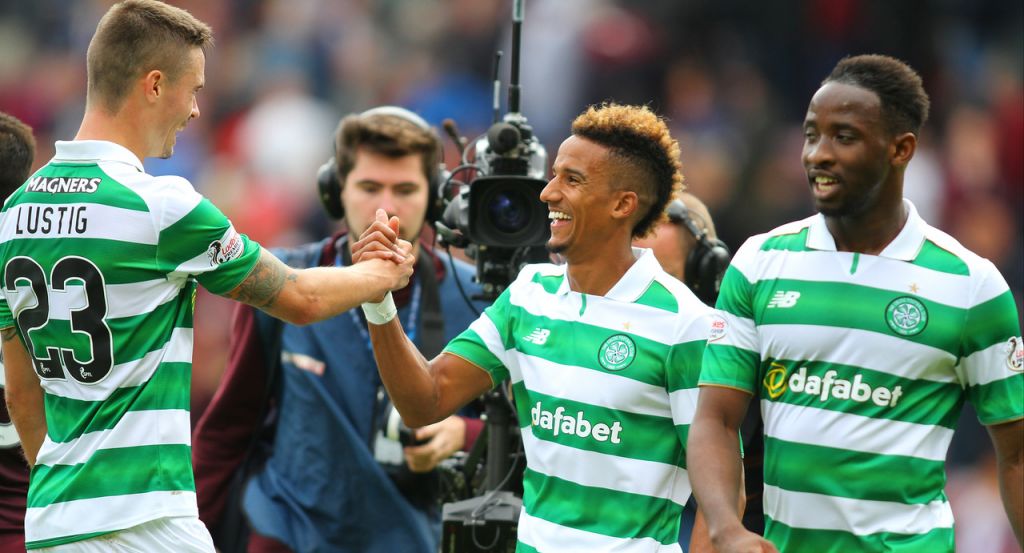 Sinclair would get his first start in midweek, one of four changes from Tynecastle as Mark McGhee brought his Motherwell side to Parkhead for the Last-16 tie in the League Cup. The former Celtic striker’s heart must have sunk when he heard the draw, his Steelmen having conceded seven without reply just three months earlier in Ronny Deila’s final game in charge of the Hoops. It would be only slightly less painful tonight. Back into the home side came Saidy Janko, Emilio Izaguirre and Tom Rogic, whilst Kolo Toure, Kieran Tierney, Stuart Armstrong and the suspended Leigh Griffiths dropped out.

Celtic were up for it from the outset in front of a sparse crowd of around 20,000, clicking quickly through the gears to open the scoring within 20 minutes. Callum McGregor’s lovely disguised chip found Tom Rogic alone in the box, his deft touch to control followed by a powerful left-foot volley past the helpless Craig Samson. Just after the half-hour it was 2-0, Scott Sinclair going past full-back Richard Tait for fun before being pushed to the ground, Moussa Dembele showing variation in his spot kicks by clipping this one high to his left.

The one-way procession continued into the second period. First Sinclair scored his first home goal on the hour, with the curling right-footed finish coming in from the left flank which would become his trademark, then Dembele added a fourth from close range minutes later, after his initial effort had been saved. With 15 minutes remaining, Rogic also claimed a brace, tapping home with his ‘standing foot’ after keeper Samson had parried a James Forrest shot. It was 5-0 going on 10-0 to be truthful. 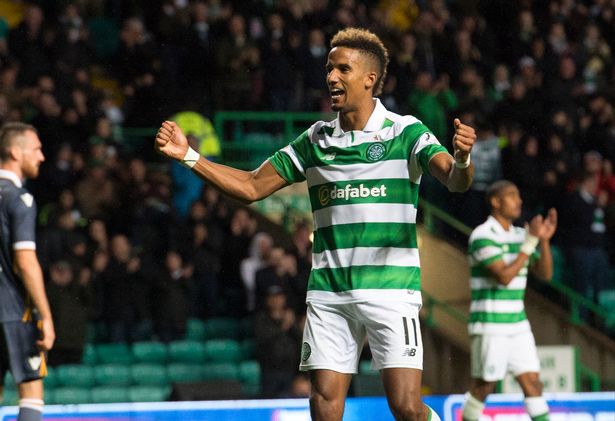 A really comfortable night had also allowed the Celtic manager the bonus of giving some of his younger players a run out. Central defender Jamie McCart, his father a former pivot at Motherwell and now a youth coach at Celtic Park, made his debut with 20 minutes left, quickly followed by Liam Henderson and Anthony Ralston. With Eoghan O’Connell, Callum McGregor and James Forrest seeing out the 90 minutes, Celtic ended the match with no fewer than six Academy graduates on the field for a major cup-tie, surely some sort of record. It was a much-needed and welcome break from the pressures of the Champions League for those of us supporters fortunate enough to be there.

It was also the night when I first thought that this could be a very special season for Celtic. Both Dembele and Sinclair were already looking like money well-spent and others seemed to be thriving from playing around them, notably Tom Rogic and James Forrest. Early days, absolutely, however, it augured well. 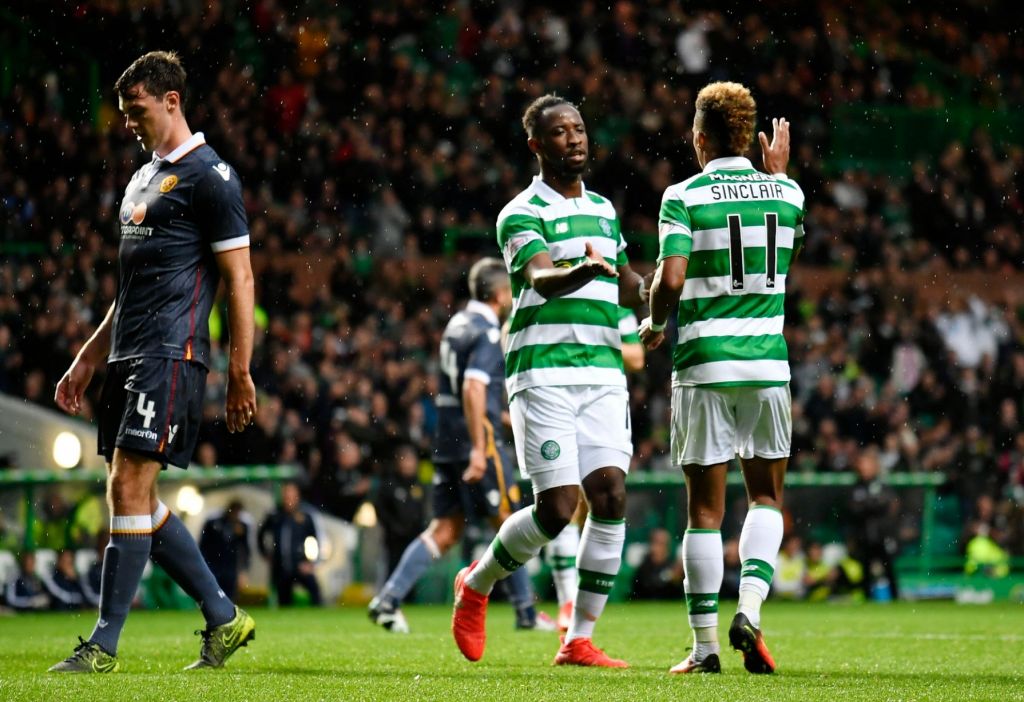 “In the first half, some of our attacking game at speed was excellent and in the second half we counter-pressed very well, which allowed us to create more chances. All round, from the first minute to the end it was fantastic. The level of performance at this stage of the season was very good. Scott Sinclair will make other players better. We are very fortunate to have him. He is a Premier League player down south. He is so fast and dynamic and gets you off your feet. He had a wonderful first game here.”

Whilst Motherwell boss Mark McGhee sounded like the man trying to get the hell out of Dodge. Alive.

“We were totally outclassed. Celtic were flying. Rogic and their wide players were brilliant at times, but we weren’t as good as we can be. There was a lot of energy expended just chasing them and whenever we did win the ball back, we weren’t able to keep it for long because we were fatigued. We have to move on quickly.”

Soon Scotty Sinclair would be given his own, very special song from the Celtic support…

An extract from INVINCIBLE, the story of that wonderful, magical season by Matt Corr, available now at celticstarbooks.com. Buy the book and get the t-shirt, whilst stocks last! Just remember to tell us your t-shirt size when ordering. Sizes available – small, medium, large, Xl and XXL. Simply add your selected size into the Notes section when ordering.

Free t-shirt when you order Invincible from Celtic Star Books

Previous ArticleHarry Hood and Big Yogi the stand-outs as the 1969-70 season kicks off
Next Article “We will be hard to stop,” Ange Postecoglou’s “brand of football” message