You are at:Home»Latest»Aberdeen get 14,500 Hampden tickets with 3000 more in reserve

ABERDEEN have been given an initial allocation of 14,500 tickets for next month’s Scottish Cup semi-final against Celtic. Their support will be located in the South and West Stands at Hampden with The Celtic support taking up the traditional Celtic end and the North Stand.

An additional 3000 tickets will be held back for Aberdeen fans and will be released for sale to them should the demand merit it. Otherwise the will be given to Celtic. Expect the allocation split to end up being similar to the Betfred Cup Final in December.

Aberdeen qualified for the semi-final on Tuesday evening after winning a quarter final replay at Ibrox by 2-0. 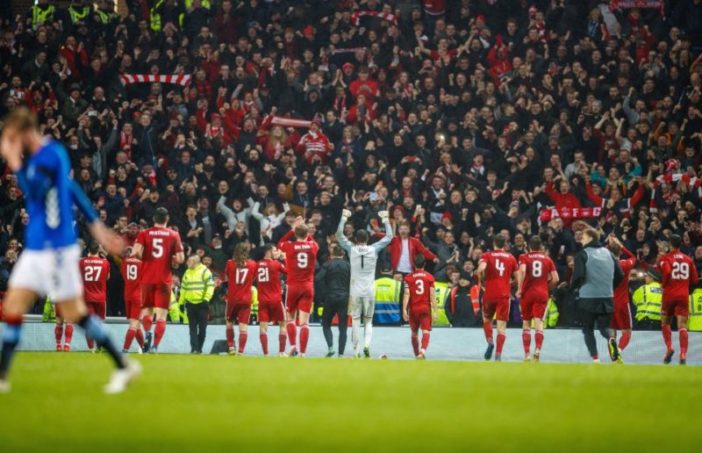 And former manager Dave Hay, in his newspaper column, reckoned that Aberdeen will provide Celtic with a stiffer challenge than the mob from Govan.

“There has been a fair bit of glee about Aberdeen getting into the semi-finals of the Scottish Cup at Rangers’ expense this week, but what I would say is that it is probably a bit premature.

“I have been impressed by Aberdeen this season and I think the game against the Pittodrie side at Hampden next month is arguably a harder tie than had it been Rangers who had gone through to the next round,” Hay noted.

The Scottish Cup semi-final has now been confirmed for Sunday 14 April with a 2pm kick-off. The other semi-final between Hearts and Inverness Caley Thistle will take place at the National stadium on the previous day.

There’s nothing yet on The Celtic website about tickets going on sale, we’ll let you know as soon as we hear anything.

Previous Article‘Van Dijk’s the best defender in the world, he’d walk into any team,’ Lenny
Next Article ‘Celtic play through the lines, their movement is fluid, but on our day, we’re capable,’ Dundee boss eyes shock