Aberdeen icon Joe Harper has told incoming Reds boss Stephen Glass to utilise the relationship between Scott Brown and Leigh Griffiths to entice the attacker to join the Pittodrie side should Celtic exercise a break-clause in the summer. The 30-year-old has been blowing hot and cold all season after a very public issue with his fitness at the beginning of the campaign.

Harper told The Evening Express that signing Griffiths would be a major coup for the Dons, if the Scotland International becomes available on a free agent.

“He’s 30 years old now and at this stage of his career he needs to be playing regular football and Aberdeen could be just the place to do it.

“Griffiths has still got plenty to offer and having him to call on next season would be a major boost for the Reds.

“Scoring goals has been an issue for Aberdeen this season and at this moment in time there are no strikers signed for next season.

“Griffiths could be the man to lead the line and provide the goals the Reds need next term under new manager Stephen Glass.” 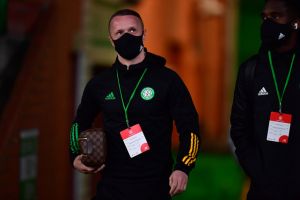 “As a striker, the sooner you can get a shot away the less time a keeper has to get ready for it, therefore – if you hit the target – you have a higher chance of scoring.

“Griffiths is a master at this and can grab you a goal out of nothing.”

Harper, who scored 206 goals for Aberdeen, says that the friendship with Scott Brown should be exploited to entice the former Hibernian striker to the North East.

“When it comes to trying to sign Griffiths, having his Celtic club captain also joining can only be a good thing when it comes to convincing the former Hibs and Dundee player that Pittodrie is the place for him.

“In terms of a statement signing for new manager Glass, Griffiths would certainly be that.

“It seems like there will be plenty of new faces coming to Aberdeen during the close season and if Griffiths was brought in that would be a good start to the summer recruitment drive.”

Griffiths has scored five goals this season in eighteen appearances. The striker’s scoring record of 122 goals in 257 appearances represents an incredible return for the £800k paid to Wolves in 2014. The club need to make a decision on whether to retain Griffiths for another season or to allow him to leave for free.

Celtic fans are split on whether or not to offer Griffiths a new deal. Ultimately it is the hope that he can replicate his best form that keeps fans supporting him; however, the good spells often are matched by a bad spell of injury, poor form or fitness concerns.