You are at:Home»Latest»Aberdeen in contact with Celtic over Liam Scales’ future

Aberdeen have been in contact with Celtic regarding defender Liam Scales’ future. With the Dons currently in Atlanta as part of their World Cup break, Goodwin gave an update regarding the January transfer window.

Speaking to Aberdeen Live, Goodwin says that the Dons have been in touch with the Scottish Champions over a loan extension beyond January as they look to secure the Irishman for the second part of the season, and potentially beyond.

“Steven Gunn has been in contact with Liverpool about Leighton Clarkson and with Celtic about Liam Scales. At the moment we are confident that both will be part of our plans when the January window closes.

“However, Celtic have been great in terms of helping us make that deal happen. And if they want to take Liam back, which I don’t think they will, as they have enough cover there, I am sure they would give us enough notice to make a change in that particular area.” 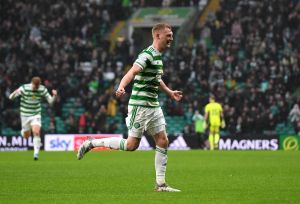 Scales was signed from Shamrock Rovers last summer and it was a deal that left many scratching their heads as it could only mean that he was coming in as defensive cover at centre-half. However, a deal was done to sign Cameron Carter-Vickers with it appearing that the Irishman would deputise to Greg Taylor on Celtic’s left side.

Goodwin has already stated that he would like to make the deal for Scales permanent but that the Scottish Champions were unwilling to agree a deal to make the move to Pittodrie anything other than a loan deal. With Carter-Vickers, Starfelt, Jenz, Welsh and possibly Yuki Kobayashi arriving as a free agent suggests that there may be little room for Scales.

Celtic On This Day – 2nd December – David Potter’s Celtic Diary
Celts in Qatar: Daizen’s Delight – Japan shock Spain to win the Group
Celts in Qatar – Daizen Maeda starts for Japan against Spain
Previous ArticleCeltic On This Day – 22nd November – David Potter’s Celtic Diary
Next Article “I think most of the boys have experienced the temper at some point,” Carl Starfelt