You are at:Home»Latest»Aberdeen manager says he won’t speak to Scott Brown until after match

Aberdeen manager Stephen Glass has said that he won’t be speaking to Scott Brown until after full-time in tomorrow’s clash at Pittodrie. Glass was instrumental in getting the Celtic captain to sign a pre-contract to become a player-coach with The Dons next season.

The teams meet in a dead-rubber tomorrow night as Celtic look to finish off their season with some degree of pride after defeat on Sunday confirmed that this was the first season since 2009/10 that Celtic have gone without a trophy. Glass, who will be taking his second game as Aberdeen manager, said to The Sun that he won’t speak to his former Hibs teammate despite their close relationship – until full time.

“The reason Scott Brown is coming is because he’s a top, top professional. Top professionals go into games trying to win for their teams.

“So I have no doubt that, if Scott plays, he will be doing everything he can with no concern he is coming to Aberdeen next year. And that’s the reason why we want him at the club.

“I would prefer he doesn’t play, purely for the fact that I don’t want the best Celtic players to play, not because he is coming here next year. 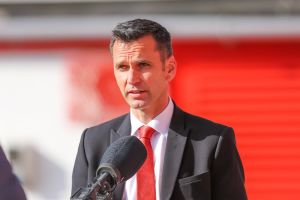 Brown and Glass have worked together before. The pair played together at Hibs before Brown completed a move to Celtic in 2007. In that time, Brown became one of Celtic’s most decorated player, became an Invincible Treble winner as well as racking up the most European appearances for a Celtic player.

Brown is expected to make the transition into management and you cannot rule out seeing him in the Paradise dugout at some point, although it will be a shame to see the player leave after this season. Brown will leave Celtic with a colossal 22 trophies and leaves as a Celtic legend. It will be hard to replace the tireless midfielder but it is something that the club need to try and achieve.