You are at:Home»Latest»Absent Enemies, Celtic’s Grown a Pair with the ‘Not Half of Anything, One Club’ Dig

This November it will be 15 years since I lived in Scotland. I moved to London for a year, stayed in multi-cultural bliss for ten of those years, and even when I left that City I never returned home to live. And you know what I rarely regret the decision to leave.

Wherever I’ve lived down South there has always been a Celtic supporters club or a Celtic pub I’ve been able to frequent and mix with my ain folk and usually places where you’d have to be brave or foolish to enter if you were of a blue persuasion.

During the passing months and years however I grew to love something more than I expected, an ability to support Celtic from afar but not to have the hassle of encountering a group of supporters from the other side of the so called divide day in, day out, those who I have little time or interest in, and in a City where I always felt I was always looking over my shoulder and with an eye constantly scanning pubs, clubs and even simply walking back into the City after a game for trouble heading my way. Instead, I could head north a few times a season and head home that night or the following morning and leave it all behind. 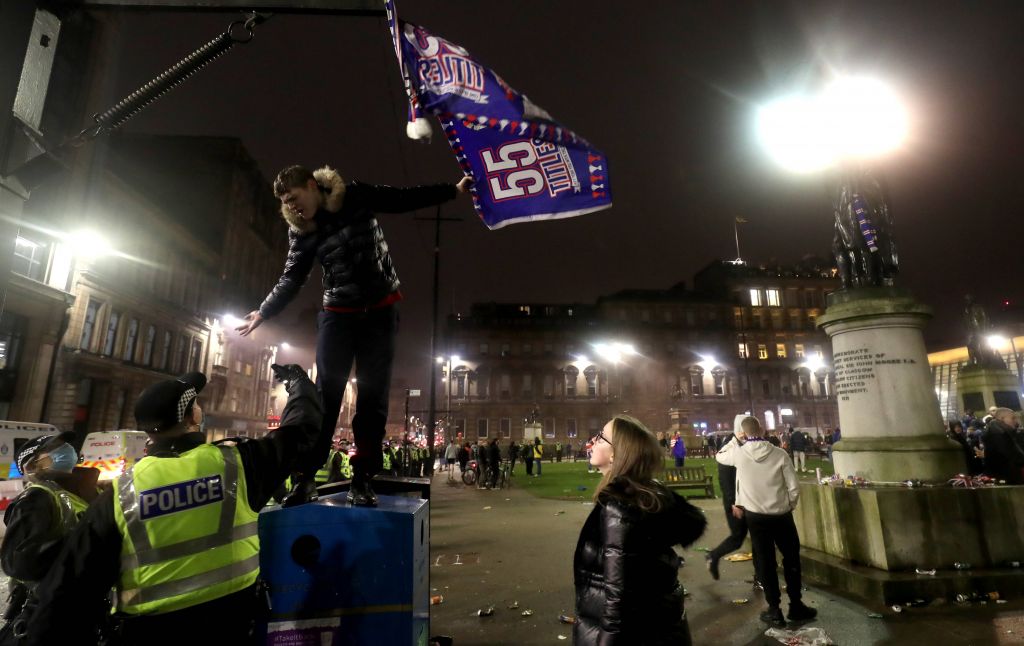 I don’t miss the Monday morning at work banter of winning and lording it, nor losing and receiving both barrels. I used to think I enjoyed the to and fro of it all, but it didn’t take long of being absent from all of it to realise the heart may have grown fonder for visiting Celtic Park, achingly so at times, but it certainly didn’t from mixing with people I had nothing in common with, and although I believed at the time, I despised them I soon learned I didn’t, I simply pitied their lot.

“At no point, unless I missed it, did Rangers simply and unequivocally say to fans ‘stay at home’ or ‘go home’”

Nicola Sturgeon’s comments today where she attempted an even-handed approach to an issue inflicted upon Scotland by only one side is a tactic I despise. The two cheeks of the same arse approach in Scotland only suits when one side are the aggressors. As such down here in England it is always ‘Old Firm’ this and ‘Ugly Sisters’ that as we are forever lumped in. When the First Minister perpetuates that message, it simply makes things worse.

When she and her government have emboldened the behaviour of the Ibrox club and support by allowing one side an opportunity to self-police all season, whilst not affording any other club in Scotland the same provision, you have to question the motives when an argument is espoused by the country’s most senior public figure, one that placates the aggressors by looking to balance what was an entirely one-sided disgrace. 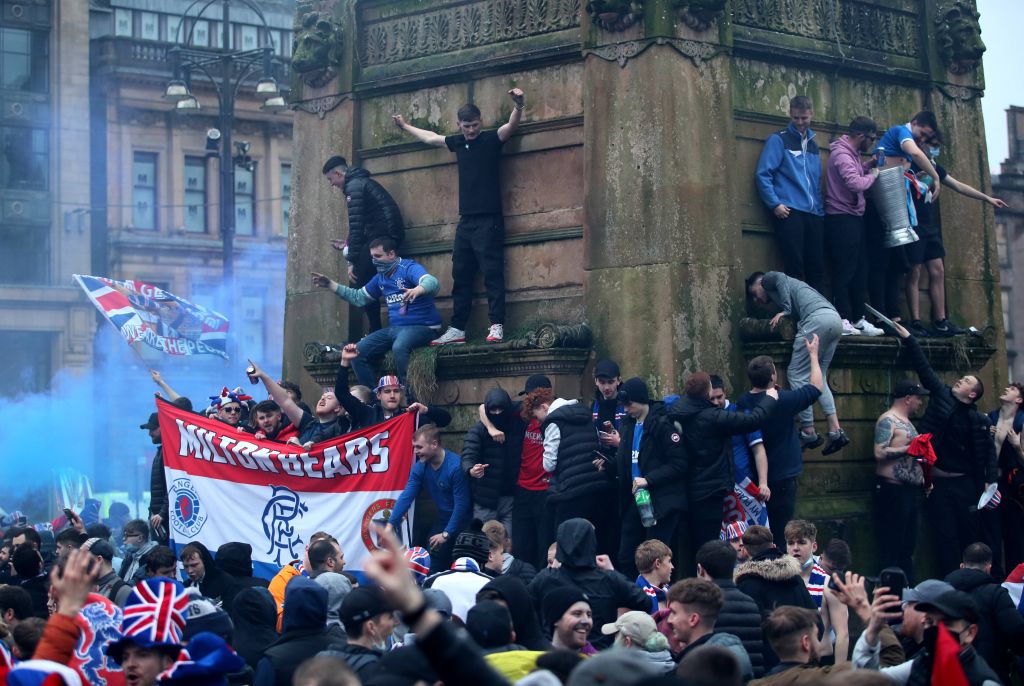 Were Celtic fans in George Square? Did Celtic fans receive Police escorts to attend an illegal gathering? So why are we brought into it? Were theRangers brought into the Dubai debate? I don’t believe they were. When our player (singular) broke protocols were theRangers namechecked? No, they weren’t. When a couple of hundred fans protested at Celtic Park last year, did theRangers get lumped into the argument? No, they did not. B

ut when thousands gather risking a rise in infection, endangering the public and a dog-tired NHS workforce – and almost certainly deaths of innocent Glaswegians and beyond, somehow, we are dragged into the debate. I won’t go any further, it’s been well covered on this platform and many others, but on and off the field there has been a serious lack of balance as to how one club in Glasgow is treated and how every other club in Scotland has been during this season. So why is it now a balancing act for the First Minister? Because the truth is Celtic will never escape this and Sturgeon’s comments should show us all just that. 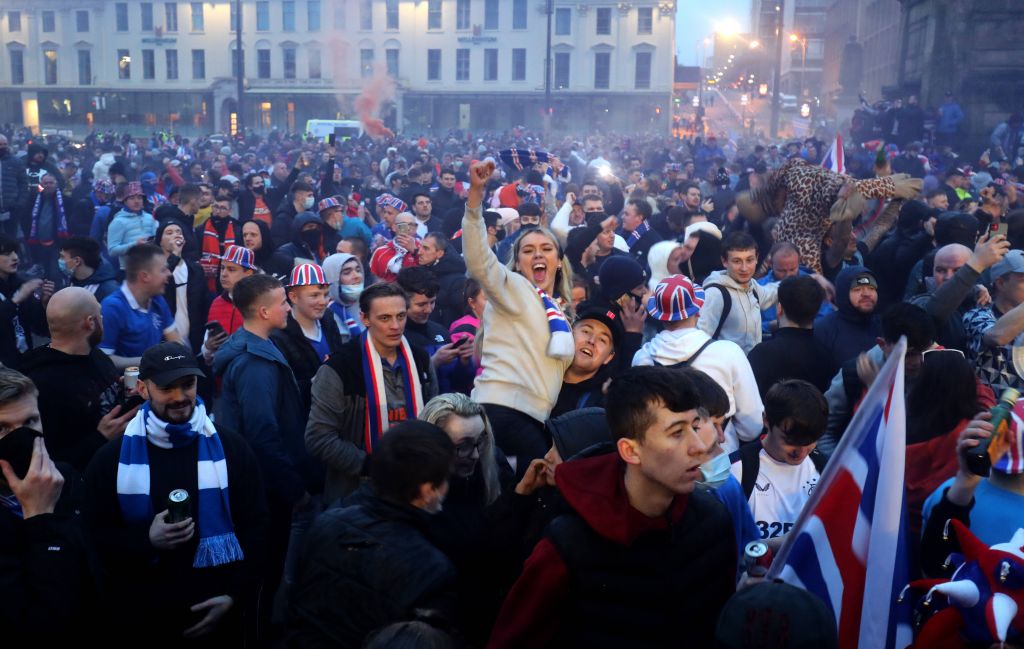 In 2012 we had a chance to look ahead and plan for a different future as a club, instead we five way complied and continued along the route back to the status quo. A small minded approach from the biggest small club in the World. A risk averse strategy to continue over 130 years of a rivalry, that is now only an imitation of itself because one club died nine years ago.

Yet just like the film Weekend at Bernies, Celtic now wander around holding up the corpse trying make everyone at the party believe Bernie hasn’t been killed. At least that movie had the decency to be funny, this one is just sinister, because I for one cannot stand the implied partnership with what amounts to a group with sectarian, racist and fascist sympathies, one now more emboldened by Brexit and their belief ‘the Peepul’ have had their second coming.

And this is not all their doing either, Celtic as a club have been complicit in all of this, and if they believed they would be thanked for their part in the continuity of ancient tradition, the hand that fed has well and truly been bitten.

We’re not half of anything… 🙄

Celtic do not and should not be part of this any phoney experiment any longer. Celtic should have grander ambitions and do not need to be soiled by the association to a club across the city so dated and irrelevant, alongside a Government who seem frightened to challenge and a Police force who prefer the approach of the voyeur rather than the enforcer – unless of course it’s the kettling of the Green Brigade, in that case things are very different. They can intervene when it suits, they can move away from George Square if you are wearing the green, if you are wearing another colour, the boys in blue are more inclined to pose for photographs and insinuate they could do little.

There are members of the Celtic Board who were complicit in the five-way agreement and Celtic are repenting at leisure now. We know it, they know it but no-one will apparently hold their hands up. So, either they do and we cleanse ourselves, or at least we realise the implications will be a perpetual guilt by association and move on.

We can change where we are, we can find a way to leave this all behind and seek pastures new. We won’t ever change anything by remaining playing in Scotland, we can lobby for reform but it is evident the SFA is only a part of the problem. Football, politics and justice will always be weighted in the favour of one side, the establishment. And we, as the First Minister showed today, are only useful to deflect the blame onto a rivalry rather than the one club responsible, a club that the late Ian Archer called a ‘permanent embarrassment and an occasional disgrace’ perhaps now, had he been able, he’d have revised the use of the word occasional. 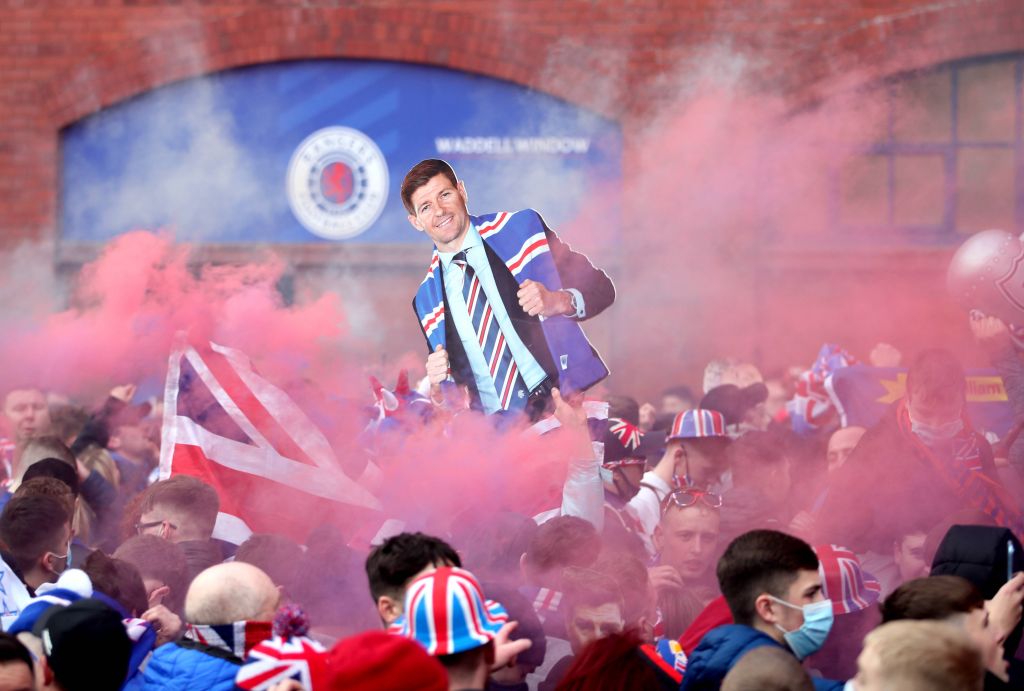 Perhaps there are some amongst our support who still enjoy that rivalry but surely that is waning, they must know now it’s a parody of what went before.

One thing I learned when I moved south was that no-one outside Scotland cares about Scottish football, they only measure Celtic when we play European opposition and even the Derby is a rubber neck watch to a car crash on the opposite carriageway. And that is not just in England, it’s a message I have relayed by many nationalities.

That is true when we seek investment, where wish to attract players, and as we are no doubt now finding Directors of Football and Head Coaches. We are entirely constrained by this pointless and now entirely fake rivalry.

If Celtic want to grow rather than be constrained, if we don’t want to be tarnished by association any longer then we need to leave this rigged game, this pathetic association with a corpse we are propping up and make plans now to leave it all behind. It is down to us to change things for ourselves. Otherwise, as we saw from Nicola Sturgeon today, we will always be a convenient association for those looking to deflect responsibility and spread the blame.