You are at:Home»Latest»‘Absolutely Excellent’, McGregor on Celtic’s Title Winning Form

Callum McGregor has stated that the trip to Dubai in January was the catalyst for Celtic’s incredible form since returning from the winter break. A lethargic Celtic were beaten 2-1 by Rangers at Celtic Park in the last game before the break.

Speaking to the Celtic View, McGregor said that the trip helped them bounce back and refocus, which has resulted in Celtic going 13 points clear over Rangers.

“Since we came back in January we’ve been absolutely excellent. In terms of performances and results we put in some good displays and racked up some good scorelines as well.

“When we went to Dubai it was the same set-up and idea as we’ve had in previous years so everyone knew exactly what we were doing. We all knew we were going to work really hard in the sessions.”

The hard work that Celtic were subjected to as Neil Lennon attempted to rectify the defeat to Rangers involved a tactical rethink, with Lennon opting for a 3-5-2 when the team returned. 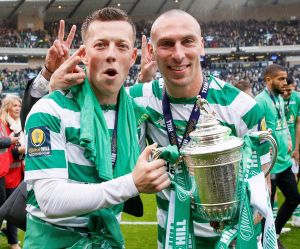 “Everyone went out knowing that we were going to focus on the tactical idea of what we were wanting to do, refocus on how we were playing the game and improve the fitness levels. The hard work was done in the morning and afternoon sessions, and then we had the evenings together to really integrate the squad.

“That’s worked really well for us in the last three or four years and this year has been exactly the same.

“Everyone arrived back fresh and hungry. We took off at a relentless pace, and momentum is a massive thing in football and we had that in abundance. We went into every game confident, hungry and knowing how we wanted to play.”

Celtic returned from the break to record 11 consecutive wins as they banished the blues of December 29 to be on track for 9IAR. Celtic now need to wait and see when they will get the chance to win the league.