Fabrizio Romano has confirmed that Celtic and Leicester City are in ‘advanced talks’ over the transfer of Odsonne Edouard. The 23-year-old is being chased by a number of teams, including Inter Milan, and the FA Cup Winners are keen to seal a deal.

Romano, a transfer expert, says that Leicester are confident of sealing a deal for the player that Rodgers signed for Celtic in 2017, initially on loan before purchasing for £9m a year later.

Leicester are in advanced talks to sign Odsonne Édouard from Celtic, now working to complete the deal – many clubs interested so #LCFC keen to secure it quickly.

Not yet at signings stage but Leicester board now confident. Soumaré deal with Lille, done and confirmed. 🔵🦊 #lcfc

Despite a quiet season by his standards, Edouard scored 22 goals and bagged 6 assists over the course of the season. He was starved of quality assistance and often cut a dejected character as the season ended in misery. A reunion with Rodgers, who is pushing Leicester into a regular in the top six, will likely mean confirmed European football and a chance to force his way into Didier Deschamps national team. 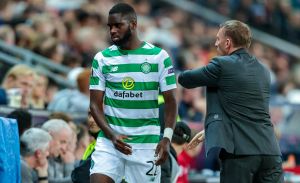 Edouard also notched 16 goals in 13 games for the French U21s, he will now likely see his progression into the top team with Karim Benzema and Olivier Giroud all in the twilight of their careers. This may be part of the reason that he sees his career moving on from Celtic in the summer, with the option of taking the next step a natural progression for a player of his age and quality.

Edouard’s departure can help fund the rebuild with Ange Postecoglou likely to be keen on bringing in some of his own players. If Celtic can pocket between £15-20m for French Eddy, this would be seen as good business considering he has just one year remaining on his deal with the club. Edouard is a top talent, a player that gave us some excellent memories and will leave with the best wishes of everyone. Although, it is a shame that he could not have left after a better season.