You are at:Home»Latest»Aiden McGeady picks surprising name for most underrated player as he came through

“When I was a young Celtic fan growing up I used to look at Neil Lennon and he used to get booed for passing the ball sideways, not positive enough.

“And then when you actually play with him at training you realise he never gives the ball away.

“In terms of underrated, you had Lenny and Lambo (Paul Lambert) but Lambo was the one that everybody was like ‘wow his technique is unbelievable”. 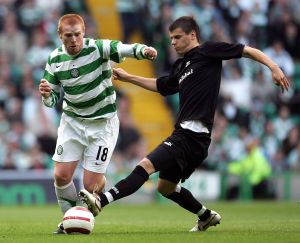 “But Lenny wasn’t technically as good as Lambo but very underrated.

“Think of all the trophies that he won at Celtic.

McGeady, a product of Celtic’s youth system, left Paradise in 2010 for Spartak Moscow. The player made over 180 appearances for Celtic and has enjoyed spells with Everton, Preston North End and Sunderland. Now, after twelve years, he makes his return to the league that propelled him to become a £10m player. Lennon was actually the manager at Celtic when McGeady left. The manager probably decided to sell him to help finance his rebuild ahead of the 2010/11 campaign.

Lennon was often a source of frustration in Martin O’Neill’s teams due to his role in controlling the game, passing back and sideways; something that seemed to go against the attacking-minded teams under O’Neill. Lambert was an excellent footballer, arriving in 1997 as Celtic were trying to stop 10IAR, he was an integral part of Wim Jansen’s team and then progressed into being a key feature under O’Neill.

Previous Article“Champions League is a dream come true for me,” Liel Abada
Next Article Chris Sutton details the only shirts he kept from Celtic career