You are at:Home»Latest»Ajax 1 Celtic 2 – Our Night of Glory in Amsterdam

For the third consecutive calendar year, European royalty visited Celtic Park in the Champions Cup. March 1980 had seen the Real Deal of Madrid beaten in Glasgow but victorious in the Santiago Bernabéu, whilst eighteen months later it was a similar story when the millionaires of Juventus came to town. Close but no cigar. In the First Round of the 82/83 European Cup, Billy’s young Hoops side were drawn against old foes Ajax of Amsterdam, in a repeat of the Quarter-final tie of March 1971. 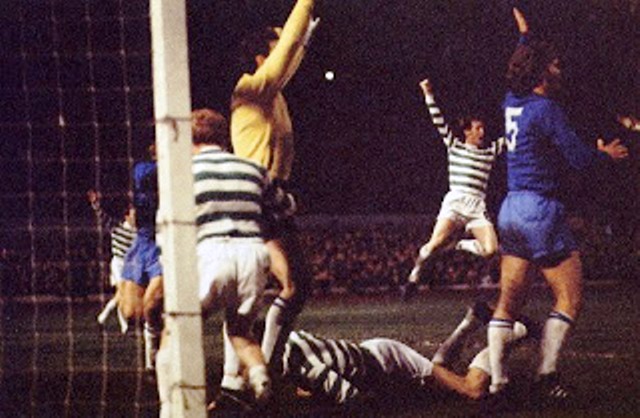 On that occasion, the great Cruyff had masterminded a 3-0 win in the old Olympisch Stadion in the first leg, and despite an 80,000+ Hampden crowd roaring them on in the return, a solitary Jinky goal was all Celtic could muster. So for the second season in a row, our European hopes were ended by a Dutch side, Feyenoord’s great rivals going on to win the first of three successive Big Cups, by beating Panathinaikos in the Final at Wembley.

Johan had left Amsterdam in 1973 to help restore the fortunes of Catalan sleeping giants, Barcelona, becoming the most expensive player in world football in the process. However, he had returned at the start of this season to his first love, interestingly replacing his good friend Wim Jansen as the future Celtic manager ended his playing career with yet another Eredivisie title. Cruyff would now play at Celtic Park for the first and only time.

If he was the master, then many of his pupils would soon forge their own glorious careers. As always with Ajax, the conveyor belt of academy talent was in full production. This year’s models were the teenage Gerard Vanenberg and Marco van Basten and whilst the former would play a role in this tie, Marco would need to wait for his chance to shine, remaining on the bench in both legs.

The spine of the team was distinctly Danish, with Jan Mølby supporting Søren Lerby and the flying winger, Jesper Olsen. This was the advent of Denmark’s Golden Generation, a decade which ended with a surprise European Championship success in neighbouring Sweden and included the best Scandinavian side I ever witnessed, the fabulous Great Dane team who lit up the ‘86 World Cup Finals in Mexico.

The first leg at Parkhead saw one of the best opening half hours of football in the history of the old ground. There were 56,000 screaming supporters packed in to watch the most open European tie in years. 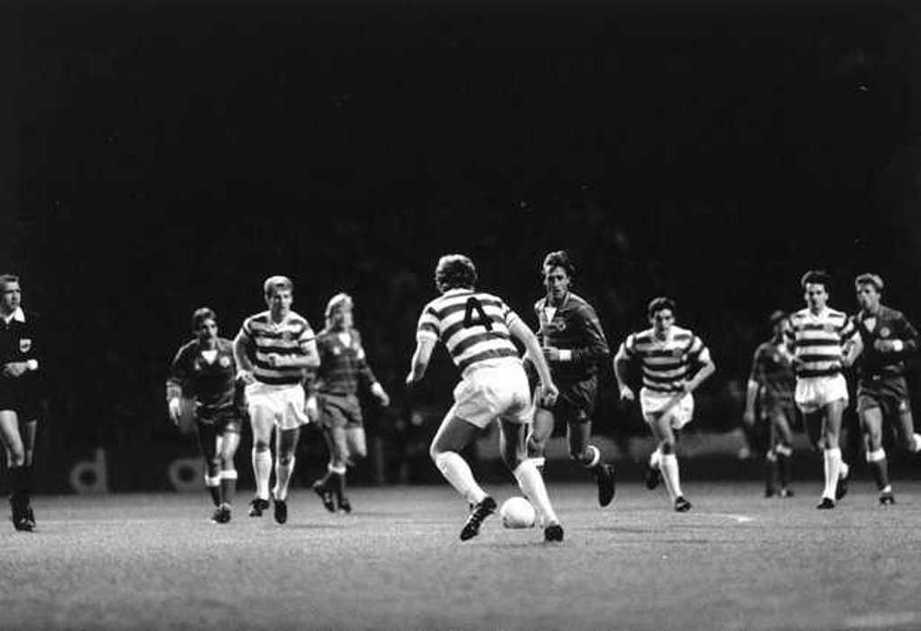 The Dutch, clad in all-blue just like Real and Juventus previously, drew first blood in the fifth minute, Olsen waltzing past several despairing challenges to beat Bonner with a fierce low shot.

However, within ten minutes, Celtic were level, Tommy Burns deceiving Cruyff on the edge of the box to earn a penalty kick, which Nicholas calmly side-footed home. Just four minutes later, came a football sequence from heaven, which I will never forget. Ajax worked the ball down the stand side through Olsen, who found Cruyff with a pass inside. The old magician then took out two Celtic defenders by playing the most exquisite cushioned pass first time into the stride of the onrushing Lerby, who then produced his own special moment by ‘dinking’ the ball over Bonner into the Celtic net. A quite sublime goal. 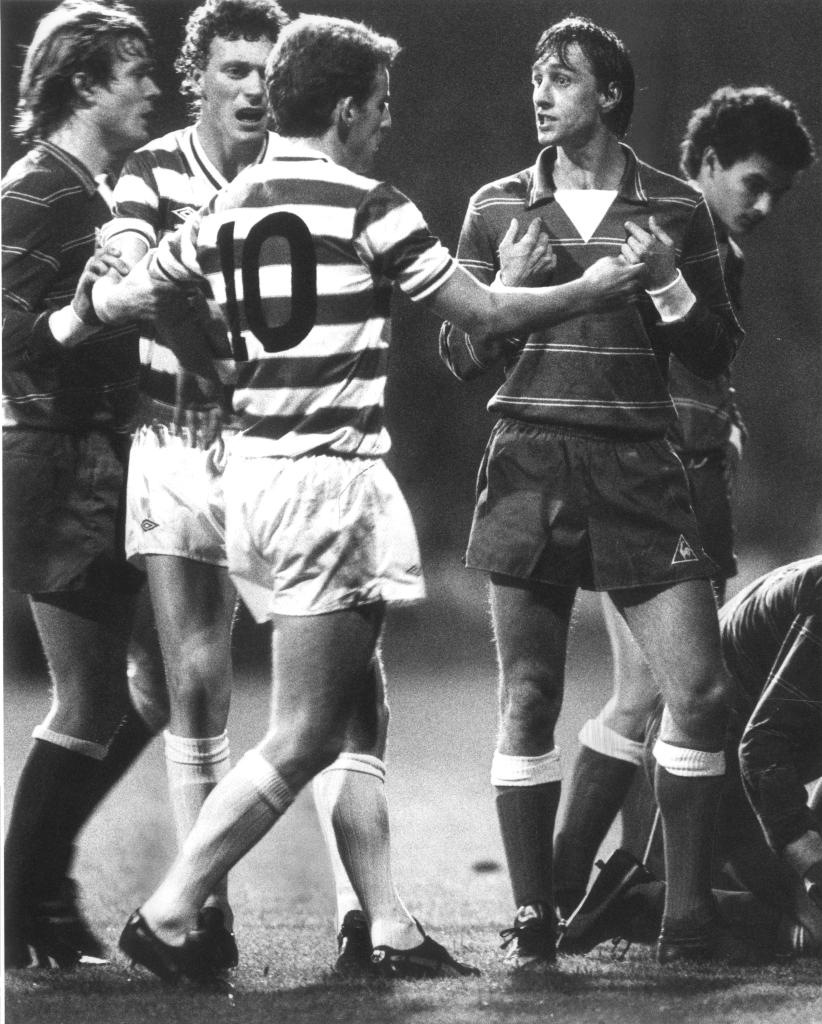 2-1 down at home, we briefly feared the worst before Celts again struck back.

This time, in contrast to the Dutch Masterpiece, it was a Route One special, as Moyes’ headed clearance was flicked on by Nicholas to find McGarvey running in on goal. A beautiful sliding finish under the goalkeeper and we were all square again. Celtic Park was in a state of frenzy. 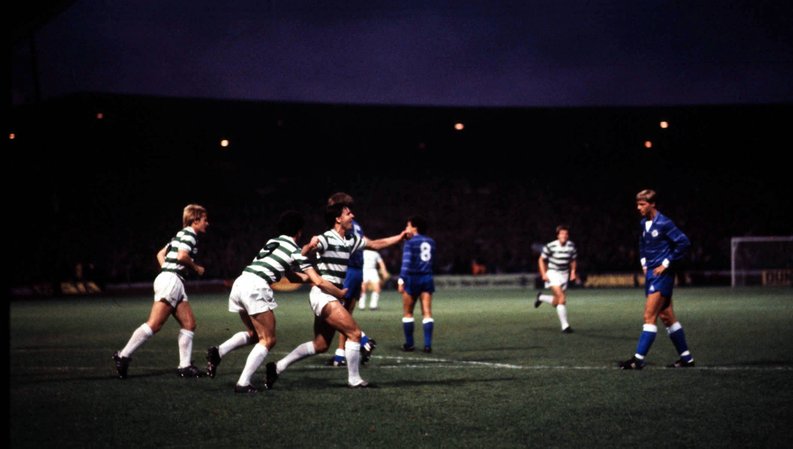 Whilst the match continued to ebb and flow and chances were made and missed at both ends, there would be no further scoring, leaving Celtic to face the daunting prospect of a ‘must win’ return leg in Amsterdam a fortnight later.

At Cairn HQ, we were gutted. The pre-season trip to Rotterdam meant that the running of a bus to Amsterdam so soon afterwards would not be viable. A small number of the Bhoys received subsidies to put towards the cost of flights. They would represent us in Holland.

I remember the night of the return game well. There was no live coverage on TV, however, bizarrely, my pessimistic/superstitious approach involved avoiding the score until the game was over. Something I do to this day.

Hence, I wasn’t best pleased when I walked into my parents’ house in Balornock and my dad broke off his telephone conversation to advise me that “last I heard, Celtic were winning 1-0.”

If looks could kill! Checking my watch, I worked out that there wouldn’t be long to play, but that this good news had probably come too soon. 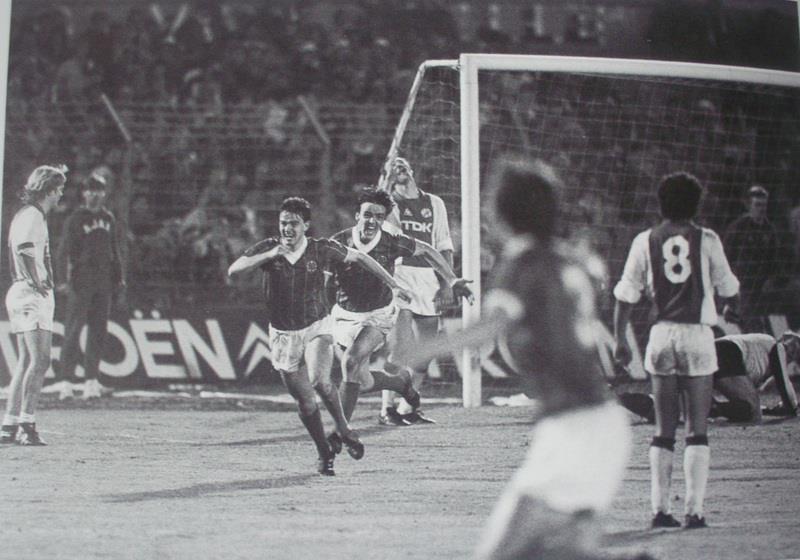 Celtic were indeed 1-0 ahead in Amsterdam, one of Charlie Nicholas’ finest moments in a Celtic shirt, as he played a 1:2 with McGarvey then weaved away from two defenders to score with the most delicious, impudent chip from the edge of the penalty box on the half-hour mark.

-This night was also a career-high for recent signing Graeme Sinclair, charged with man-marking the great Cruyff for the toughest challenge he would ever face on the field, a challenge he coped with admirably. He had been involved in the build-up to Charlie’s goal and would set up McGarvey for a late header which excruciatingly came back off the crossbar to safety. Not bad for a guy signed just three weeks before.

Another notable performance came in the shape of goalkeeper Pat Bonner, who time after time defied the Dutch forwards to keep Celtic level, with a little help from his woodwork. However, as is often the case, he was finally beaten by the softest and cruellest of efforts, a cross from the young prodigy Vanenberg eluding everyone to sneak into the corner of the net at the far post and suddenly it was advantage Ajax again, as we moved into the final third of the game. The majority of the 65,000 sell-out crowd roared their team forward and surely Celtic were facing elimination. 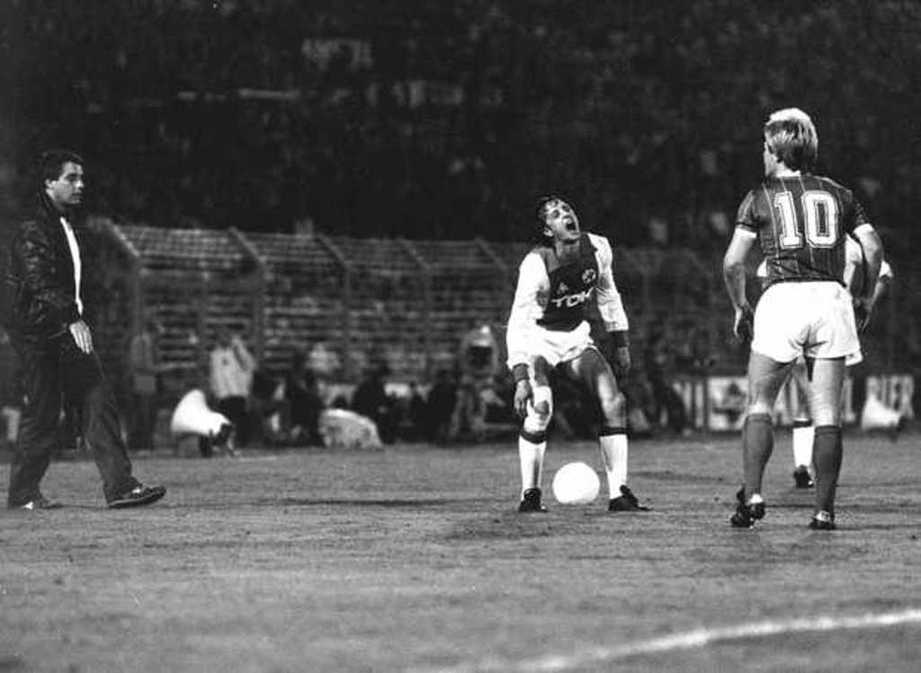 The game and ultimately the tie hinged on two substitutions. As the clock ticked down and the feeling increased on the Dutch bench that the job had been done, the call came for the removal of Cruyff. Off he went slowly, limping, still complaining about the treatment afforded to him by the aforementioned green shadow, Sinclair.

It was a decision that with hindsight would come back to haunt them. A few minutes earlier, Celts had made their own change, George McCluskey replacing Davie Provan to leave all three main strikers on the field, as Billy went for win or bust.

Nicholas and McCluskey knock an excellent Ajax side out 4:3 on aggregate. pic.twitter.com/pN8CPautoF

We’re into the final minute as the ball is played across the Ajax defence to find McCluskey on the left corner of the box. He shuffles past his marker to find a yard of space then angles a left-foot shot low across the face of the goal. It beats the keeper and finds the inside of the far post and both players and Hoops supporters, some 3,000 packed into the opposite corner of the stadium, go berserk. 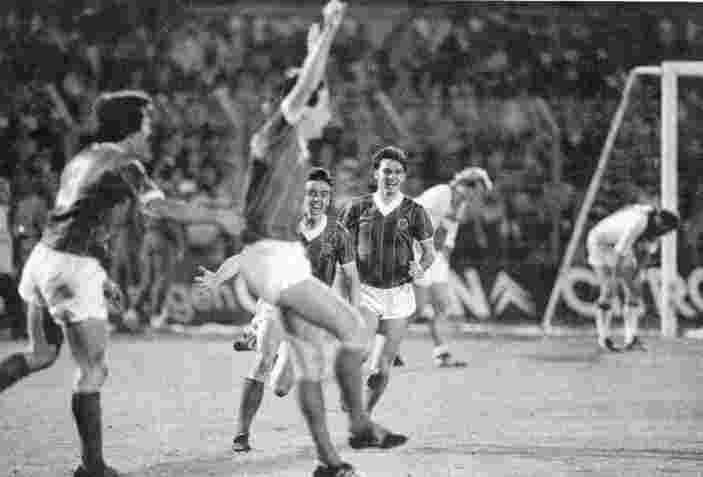 I first saw this goal thanks to a kind friend, who mentioned that he had a VHS video copy of the Dutch footage of the match, a few days later. I’ve rarely been so popular, as a succession of pals arrived to watch the tape, complete with Dutch commentary where the only recognisable words were the players’ names. I can still see and hear it vividly to this day. I wonder how many of those sacred video cassettes are tucked away in Celtic collections after all these years?

This was a wonderful scalp for Celtic, following the disappointments of the previous years. Ajax would go on to win a domestic double that season, although they would implode soon afterwards. Cruyff fell out with the club and in a remarkable turn of events, signed for fierce rivals Feyenoord, where he won the double the following season. Talk about twisting the knife?

The three Danish stars moved on also. First to leave was skipper Lerby, at the end of that season. Having won five Eredivisie titles with Ajax, he joined Bayern Munich, where he would win two Bundesliga championships, before returning to the Netherlands and PSV, capping off a marvellous career with a further two Eredivisie medals and a European Cup.

The following season saw the departures of both Molby and Olsen. Molby moved to Liverpool and had a successful eleven-year career there, winning the Double under Kenny in 1986 and a further Championship and FA Cup. Whilst at Anfield, in a sort of ‘reverse Steve McClaren’, he also developed the world’s most bizarre Scouse accent.

Olsen also moved to England, in his case along the East Lancs Road from his friend to Old Trafford, to sign for Ron Atkinson’s United. Strangely, in my opinion the most talented of the trio achieved the least post-Ajax. His spell in Amsterdam had seen his stock soar with a series of spectacular goals and assists, as we had witnessed first hand at Celtic Park.

He was famously involved with Cruyff in the innovative 1:2 penalty shortly after the return leg in Amsterdam, Johan shaping up to take the kick but instead knocking the ball to Jesper, who played it back allowing Cruyff to pretty much walk the ball into the net. All perfectly legal, certainly at that time. His stay in Holland would sadly be his zenith, five years in England producing a solitary FA Cup medal, in 1985, before his career petered out in France with Bordeaux and Caens. He retired whilst barely in his thirties.

Back at Celtic Park, as Paul McStay would often say, there was a real buzz about the place as we awaited our next opponents in the European Cup and contemplated further glory on the domestic scene.

Exciting times indeed, for those of a green and white persuasion.

Previous ArticleLewis Morgan focused on Celtic and not another Ross Re-union at Hibs
Next Article ‘Celtic fans are nice,’ Jullien said, ‘Rangers fans are trying too but it’s more vicious’