You are at:Home»Latest»Ajer Hails ‘Crazy’ Celtic Fans after Lazio Triumph

Kris Ajer has described the scene of 9,000 Celtic fans celebrating behind the goal at the Stadio Olimpico as ‘crazy’ after Olivier Ntcham chipped the ball over the oncoming Thomas Strakosha to seal a famous victory for the men in Hoops.

Speaking to The Scottish Sun, Ajer expressed his delight at qualifying for the Last 32, especially doing it in Rome against a top Lazio side.

The Norwegian central defender is on International duty ahead of games versus Malta and Faroe Islands. However, the 21-year-old was keen to pay tribute to the Celtic support after he described the win in Rome as the ‘biggest occasion’ he has been involved in.

“It’s probably the biggest occasion I’ve been involved in. Winning in Rome with 9,000 Celtic fans behind the goal was absolutely crazy.

“Qualifying there and moving on to the next round was completely wrong!

“At Celtic we have the world’s best supporters who travel around the world and support us everywhere.

“But qualifying from the group with two games to spare is an insanely great achievement for us. It’s very important we continue to perform well now.” 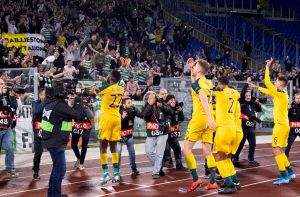 The win in Italy was Celtic’s first and to do so against the side that sit 3rd in Serie A is quite an achievement. Neil Lennon and his side deserve enormous credit for doing so but they will be hungry to keep the form going and winning games.

Between the return to domestic football next week and the Winter break, Celtic have a potentially season-defining period with a cup-final, a Glasgow Derby and numerous league games in-between to, hopefully, put some daylight between ourselves and the challengers below.