You are at:Home»Latest»Albanian President’s message to Craigneuk Tommy Gemmell CSC

The Albanian President together with the former Celtic defender Rudi Vata has sent a message of thanks the the Craigneuk Tommy Gemmell CSC.

The Craigneuk Bhoys sent Ilir Meta some Celtic goodies including the new Celtic top and a t-shirt and scarf from their Tommy Gemmell CSC.

President Meta and the former Celtic Star – the first Albanian to play For Celtic – earlier this year set up their own Albanian Celtic Supporters Club in Tirana. And the Albanian connection with Celtic continued to develop with the Albanian born Swiss striker Albian Ajeti signing for Neil Lennon’s side in the summer – much to the Albanian President’s delight. 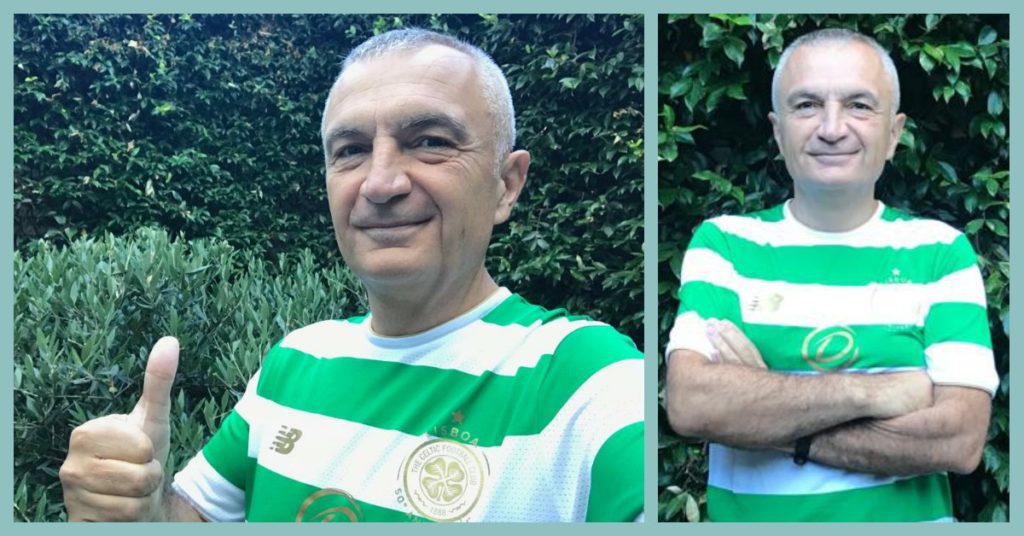 During the week he welcomes some British trade officials to the Albanian capital and despite these officials admitting to being Chelsea fans themselves, they brought the President a Celtic strip over. Meta recently admitted that in correspondence with other world leaders he signs off his letters with Celtic’s Hail Hail message.

But he’s a man of the people and he was quick to get his photograph taken wearing the Hoops jersey sent to Albania by the Craigeuk Bhoys with his pal and former Albanian CSC committee member Rudi Vata wearing the Craigeuk t-shirt, both proudly holding the club’s scarf.

One thing that must happen when the support is allowed back into Paradise is to invite President Meta and Rudi Vata over to Paradise – they are sure to receive an unbelievably brilliant welcome!

Thank you to the Craigneuk Tommy Gemmel CSC for the New Celtic Jersey, Scarf and T-Shirt..Very kind of you..HH Bhoys 🍀🍀 #CelticFC💚 pic.twitter.com/sTNXN9gkry