You are at:Home»Latest»All In – Callum McGregor Commits Future to Club Until 2026

ALL IN! Celtic Captain Commits Future To The Club Until 2026…

Celtic today confirmed that newly appointed captain, Callum McGregor, has put pen to paper on a new five year deal, taking his time at the club all the way up to 2026.

Recently taking over the armband from club legend, Scott Brown, McGregor was the obvious choice when the armband was vacated. Since making his debut for the club in 2014 under then boss Ronny Deila, the Scottish midfielder has made over 300 appearances scoring 54 goals. 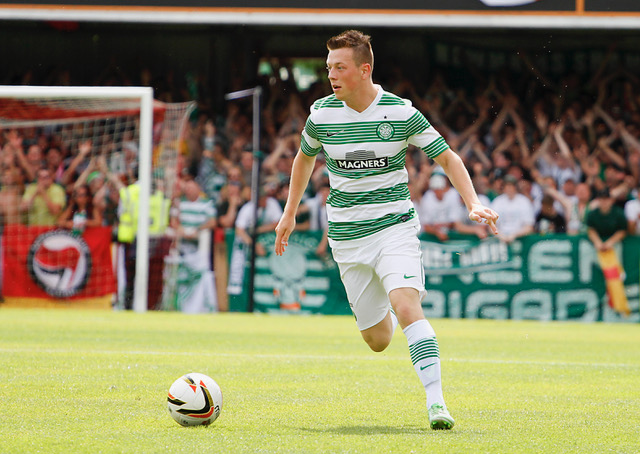 Since signing his new deal McGregor said; “The club’s very close to my heart. I’ve been here for a number of years now, I’m happy here, I love my football and representing this club, and I want to stay here for as long as I can.” McGregor joined the club a staggering 20 years ago all the way back in 2001.

Having come through the youth academy at Celtic he joined Notts County in England on loan for the 2013/14 where he would gain vital first team experience. His time there was successful where he finished top scorer at the end of the season with 14 goals in a struggling team which featured now Man City midfielder Jack Grealish.

2014/15 would be his breakthrough season as new boss Ronny Deila would give him his first team debut in a Champions League qualifier away in Iceland against KR Reykjavik, where he would score his first goal for the club in a 1-0 win.

It was during the 2016/17 season under Brendan Rodgers where he would really come into his own. He played a big part in the second half of the season as Celtic became the first Scottish club to go through a whole season unbeaten and win an invincible treble.

McGregor won Celtic’s player of the year in the 2018/19 season as they completed an historic treble treble. He struck up a strong relationship on and off the pitch with Scott Brown as the midfield duo would go on to win the Quadruple Treble in what would be a significant moment of this legendary club.

When Brown announced that he would be leaving the club after 14 years it became quite clear that McGregor was the frontrunner to take over the armband. Incoming boss Ange Postecoglou soon confirmed that McGregor would be the club captain going forward.

Recent performances earned the 28 year old a new five year deal, putting to bed any rumours of a possible move down south, with Leicester boss Brendan Rodgers a big admirer of the player.

McGregor will hope to lead his men to silverware this season and win back the title after a lackluster campaign last season to say the least.

There is huge significance this season for the league winners with the champions all but guaranteed automatic Champions League group stage football, escaping the dreaded playoffs for the first time in more than a decade.

Celtic take on Dundee United at home this weekend as they look to get back to winning ways in the league.

*The Celtic Star took part in the Fan Media Conference today with Callum McGregor but have decided not to post this on the site due the intervention of the Celtic PR staff member who objected to our editor describing Callum McGregor as not just a Celtic footballer but a now a Celtic legend. Unless there is a mutual respect between the the fan media and the club’s staff we will be joining so many of the other sites in withdrawing from participation forthwith.

If Celtic FC can’t provide manners and common decency in their behaviour then they have no right asking for supporters or representatives of the fan media to do just that. Maybe it’s best to close down the entire experiment? The behaviour today fell well short of being acceptable and it is not on.

Previous ArticleVideo: Highlights as Celtic seal place in semi-finals
Next Article Celtic v Dundee United: Ange Postecoglou urges Celtic to ‘get on with it’