You are at:Home»Latest»Anderlecht linked with £4.2m move for Nigerian International, could move open door for Celtic swoop?

Celtic were today linked with Hendrik Van Crombrugge, Anderlecht’s captain. The 28-year-old goalkeeper said that he “loved Glasgow Celtic” due to their tradition and that he would love to sign for the club in an interview with Belgian news outlet DHNews Eleven Sports.

“What I like in clubs is tradition. That’s why I love Glasgow Celtic.

“If someone tells me one day that I can go and play for them I’ll be off immediately asking ‘where do I sign?’!

Fans will have lapped up the news given the poor performances between the sticks by Celtic’s goalies since Fraser Forster and Craig Gordon left in the summer of 2020. However, Van Crombrugge is contracted to Anderlecht until 2025, having signed an extension as recently as November 2020. 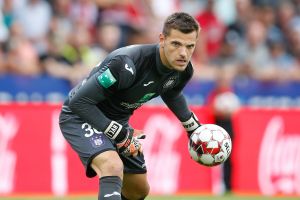 Although there is hope in the form of a transfer link for Sparta Rotterdam’s Maduka Okoye. RP Online, via Complete Sports, state that Okoye is a transfer target for Anderlecht and the Nigerian Internationalist is said to be available for £4.2m. Okoye has impressed in the top Dutch league and is being pursued by a number of clubs. Anderlecht have emerged as favourites for his signature as they are reportedly looking for a new No.1 as they expect Van Crombrugge to move on this summer.

Celtic will likely be considering a move this summer for a new No.1 as Barkas continues to underwhelm in between the goals at Paradise. Ange Postecoglou said that he would give ever player a blank slate as he arrived at the club but Barkas’ howler against Midtjylland may force the boss to review his options.

A move for Van Crombrugge would certainly be an upgrade on Barkas but he would likely require a fairly significant outlay.  A loan deal may appeal to Celtic but they will likely have another number of players on their shortlist as they continue to assess the situation.