Ange Postecoglou arrives as the Celtic manager with an enormous rebuilding job ahead of him. Celtic were poor on all fronts last season and the Australian will know that he needs to hit the ground running in order to regain all three trophies and achieve Champions League football. The 55-year-old has won titles in Australia and Japan as well as the 2015 Asia Cup with Australia but he will know how important it is that he gets his recruitment right.

We have already looked at left backs and goalkeepers so we will today look at right backs, a position that Celtic have struggled in this season.

Back in 2019, Celtic’s long term right back Mikael Lustig departed the club and there appeared to be no heir apparent at the club. Fast forward two years and Celtic have just Anthony Ralston available, a player that has never really kicked on.

Lustig’s departure saw two signings – Hat Abd Elhamed from Hapoel Be’er Sheva and Moritz Bauer from Stoke City on loan. The pair were also joined by relatively unknown Jeremie Frimpong on deadline day from Manchester City’s Academy. Elhamed proved to be a bargain with a bit of pace and versatility in defence whilst Frimpong was a revelation quickly bursting into the first team between the two seasoned pros and firmly establishing himself as a fan favourite. 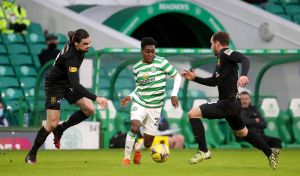 One year on, Bauer returned to Stoke due to a lack of game time and Frimpong was one of Celtic’s best players. Lennon decided that Frimpong should sit on the bench versus Ferencvaros whilst Elhamed, who tires easily, would go up against their pacey attacker Isael. The Hungarians won 2-1, despite Celtic being favourites and dominating. It was a sign of what was to come.

The campaign went from bad to worse as Elhamed was injured. Frimpong played but there was a difference. His runs weren’t being supported, his cutbacks not met and for the first time in his Celtic career, he was having to defend a lot more, often being exposed being caught forward allowing Shane Duffy to be exposed. Frimpong left for a deal worth £11.5m that January. So too did Elhamed, leaving Celtic with Ralston. It was the biggest indication yet that the board had written off last season. They’d cashed in on an asset and refused to reinvest. Jonjoe Kenny from Everton on loan was all that Celtic could muster as it was clearly this was just a plaster being used to cover the gapping hole in the club for a right back.

Kenny was steady but ultimately not good enough as his performances against Rangers proved. Celtic now need to find two right backs that are able to come in and compete for a first team jersey. Anthony Ralston appears to be the one and only option next week for Ange Postecoglou to look at. He will decide then whether the club will pursue certain targets but it appears almost certain that he will.

Celtic have been in the market for a right-back for a while, so you would think that they had some on their radar. However, if they don’t there are a couple that the club should consider.

Valentin Rosier, 24, is an attacking full-back who has spent the last year at Besiktas on loan from Sporting Lisbon. In that period, he assisted seven times and scored three over 37 appearances. He would certainly be at the upper end of Celtic’s wishlist with the player likely to attract bids in the region of £7m. Besiktas want to make the move permanent but the opportunity at Celtic could be one that Rosier may appreciate, especially given the success that some French stars have had at Paradise.

Silvan Widmer of FC Basel was linked with Celtic in 2019 before Elhamed was signed. He was also linked after Elhamed signed with Celtic opting to go for Moritz Bauer and the unknown Jeremie Frimpong from Manchester City instead. However, Widmer is a pedigree that would excite Celtic.

He is an attacking full back, who can play in midfield as well as defence. In 323 career appearances, he has 45 assists and 28 goals. He would likely cost around the £3-4m mark, as Basel paid Udinese almost £5m for him in 2013. Although, he has got 12 months remaining on his contract, Celtic may be able to negotiate a decent price for the Swiss Internationalist.

The 27-year-old was linked with Bundesliga side Schalke in the summer but no deal transpired and Celtic could swoop to bring the defender to the club.

Aurélio Buta from Royal Antwerp is another impressive option that is still in his formative years but could make a splash with Celtic. The 24-year-old has twelve months left on his deal in Belgium. Wolves failed in a £5m bid for the player 12 months ago with the player opting to remain in Belgium. However, the former Benfica youth prospect could look at moving up the rungs of football with a move to Glasgow. Buta is aggressive, attacking and quick. He would probably resemble Jeremie Frimpong in terms of style – keen to get forward and maybe more of a wingback.

Stephen O’Donnell, 29, performed admirably for Scotland last night at Wembley and Ange Postecoglou was in attendance. The manager may feel that the Motherwell full back is a good option as a back-up to one of these more attacking options. He has two years left at Fir Park but he would be the cheapest option and steady, if not uninspiring. He wouldn’t be the type of player that is good against teams sitting in but he can certainly defend well and make an impact going forward sporadically.