Ange Postecoglou has arrived as the Celtic manager with an enormous rebuilding job ahead of him. Celtic were poor on all fronts last season and the Australian will know that he needs to hit the ground running in order to regain all three trophies and achieve Champions League football. The 55-year-old has won titles in Australia and Japan as well as the 2015 Asia Cup with Australia but he will know how important it is that he gets his recruitment right.

We have looked at the defence, the goalkeeper and midfielders but today, we look at the strikers available to Ange.

Celtic have three strikers currently contracted for the new season – Odsonne Edouard, Albian Ajeti and Leigh Griffiths. However, only Ajeti appears to be in contention for a start at the moment.

Edouard has just twelve months remaining on his deal and Celtic will be acutely aware of losing him on a free transfer next summer. The player seems keen on an exit after four years in Glasgow. Having joined initially on loan from PSG, Edouard diligently worked away and became a mainstay in the Celtic team after convincing the club to pay £9m to the French side.

Despite a quiet season by his standards, Edouard scored 22 goals and bagged 6 assists over the course of the season. He was starved of quality assistance and often cut a dejected character as the season ended in misery. It appears almost certain that the player will leave with a number of clubs likely keeping tabs on the situation. He would certainly be interested in a move to the Premier League, France or Bundesliga, especially to a team that would give him the chance to play in Europe and compete for trophies, something he is used to from Celtic. With 55 league goals in three seasons, Edouard has proven himself to be an excellent operator and his goals will be hard to replace. 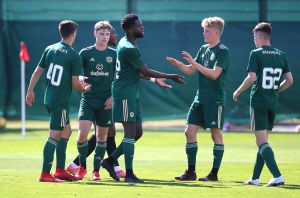 Signed from West Ham last summer, Ajeti hit the ground running scoring five times in five games at the beginning of his time in Glasgow. Injuries and lack of game time hampered his opportunities to show what he was capable of following the £4.5m move from East London. Ajeti looked out of sorts but he wasn’t helped by the manager, Neil Lennon, saying that the player wasn’t fit.

Ajeti has returned to training this season under Ange Postecoglou, he looks leaner and hungrier. His comments ahead of games proved that he was willing to work for his place in the team and two goals in the first three games certainly proved that he can be be relied upon in the manager’s system. Although, in the last friendly against Bristol City, he was forced off with a slight injury. The manager knows that if he can get him fit and firing, he will have a top player at his disposal. 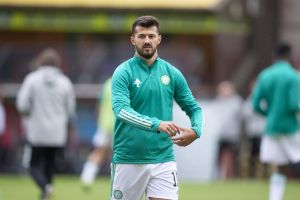 Leigh Griffiths’ deal expired at the end of the last campaign and fans were split as to whether or not the player would receive improved terms. It looked as if Griffiths was set for the exit door but at the start of July, it was announced that Griffiths had signed a new deal, albeit on reduced terms. However, just a matter of days after the deal was announced, Griffiths had been accused of inappropriate online behaviour. The club acted promptly to suspend the player while a probe was launched into his alleged behaviour. Subsequently, Police Scotland confirmed that the player had been cleared of any criminal offense. Although, the club may still decide that the action was contrary to his contract of employment. With 123 goals, Griffiths has an impressive record for the club but given the public issues of the past, Ange Postecoglou may not be willing to put up with the 30-year-old’s sideshow. 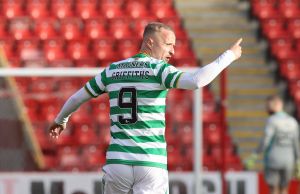 Celtic are needing to sign a number of players this window and may need two more strikers. The club lost Vakoun Issouf Bayo and Patryk Klimala as the duo were both sold for over £5m but the club are yet to reinvest this. Links have been made to Kevin Nisbet from Hibs, the Easter Road outfit are said to want over £3m.

With Edouard set to depart, Celtic need to reinvest in a new quality central forward to compete with Ajeti for a starting role. If Griffiths is retained, he will be third choice striker but if he is let go, the club need to find another attacking option, whether that be a target man or not, someone that adds another dimension to our play is required.