Ange Postecoglou has arrived as the Celtic manager with an enormous rebuilding job ahead of him. Celtic were poor on all fronts last season and the Australian will know that he needs to hit the ground running in order to regain all three trophies and achieve Champions League football. The 55-year-old has won titles in Australia and Japan as well as the 2015 Asia Cup with Australia but he will know how important it is that he gets his recruitment right.

We have looked at the defence and the goalkeeper and central midfielder positions but today, we look at the wingers available to Ange.
Over the last decade, James Forrest has been an unsung hero at the heart of the Celtic team. The 29-year-old picked up an ankle injury at the beginning of the season and as a result, made just 17 appearances. To be fair to Forrest, he has often received stick from some sections of the support (myself included) but when he isn’t there, you realise how much he is missed. Making runs, forcing the defenders into making decisions and punishing them. His stats were really aided by the arrival of Brendan Rodgers and it’s testament to his own hard work that he continued them well after Rodgers’ departure. Forrest will be a big player this season and Ange will know that given his style of play, Forrest could be essential to it. 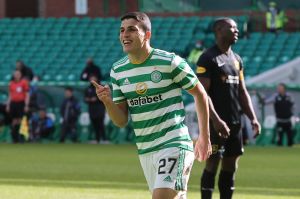 Moi Elyounoussi carried the majority of the weight last season in terms of Celtic’s natural wide players. The Norwegian was on loan at the club for a second season in a row and made 45 appearances this campaign. In that time, he scored 17 times and assisted 8 times in what was a difficult season for the club. The 26-year-old probably suffered due to the constant changing of formation by Neil Lennon coupled with the fact he was played in a central position when he was clearly at his best coming in from the left. In this sense Lennon was impacted by injuries but his reluctance to sign wingers in the transfer window was puzzling for all of the support. Elyounoussi will be a big miss next season as he returns back to Southampton, where he has two years left on his deal. There could be a small chance that he may return but it seems unlikely that the club will want to shell out for the player when they’ll likely have options known to them at a cheaper price.
Mikey Johnston has been another that missed portions of the season through injury and you think what might have been had he been fit and firing over the course of the season. The 22-year-old made just 10 appearances last season, earning one assist in a season plagued by injury but for the lifelong Celtic fan, he needs to be making an impact this season as he looks to prove to the manager that he is a sustainable, long term option for the club. With a contract until 2025, Johnston is clearly well thought of at the club but if he won’t be utilised, a loan deal may suit him – such as Ryan Christie’s to Aberdeen in 2016. An opportunity to play games, score goals, get assists and really craft your game that sometimes watching from the sidelines doesn’t afford a mercurial talent like Johnston. 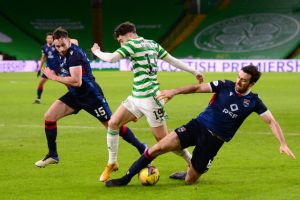 Karamoko Dembele sparkled in his brief cameos at the end of last season. In those five games, Dembele scored given the limited time on the pitch that he was given; however many expected it to be due to his impending contract expiration. Although, interim boss John Kennedy explained that he had one year remaining on his deal. As a result, he needs to be given game time to prove whether he can offer the club something different moving er Haforward. The 18-year-old is obviously extremely talented and needs to be given an opportunity to stake his claim for the team and new boss Ange will likely give him an audition for the first team.
In terms of potential signings, there have not been many names banded about that Celtic should look to sign. Forrest and Johnston offer natural width and talent but Postecoglou will need more depth than that.
Jakob Murphy – Out-of-contract with Newcastle, Murphy impressed in the last campaign and would be a decent enough acquisition to play on the wide areas. The 26-year-old plays predominately on the right but can also play off the left too. The player made 31 appearances for Steve Bruce’s side last year, scoring three and assisting four.
Andros Townsend – Like Murphy, Townsend is a free agent but is likely to receive another contract offer from Crystal Palace. The 29-year-old said that he would be open to playing in Scotland and given that he is an experienced winger, he could bring Ange’s style of play to the fore, while using his experience in England to support the younger players. You could probably strike similarities between Townsend and Scott Sinclair arriving from a club where defending is more important than attacking and playing at Celtic could unlock his real attacking potential. He would be a shrewd signing if appropriate wages can be agreed.
Bright Osayi-Samuel – The 23-year-old winger joined Fenerbahçe in January and made 18 appearances, netting  once and assisting once. Now, the Turkish giants are considering selling Osayi-Samuel as they look to raise capital ahead of next season. The former QPR winger is known for his blistering pace and flair; however, he has been unable to replicate these talents in Turkey. As a result, Celtic could reignite their interest in the winger.
Jens Petter Hauge – AC Milan want to sell the talented Norwegian winger and for £7m, Celtic could certainly be in with a shout of landing the 21-year-old. Hauge actually scored against Celtic in the win at Parkhead in the Europa League; however, he has been deemed as surplus to requirements just one year after his move to Milan from Bodo-Glimt.
Previous ArticleOlivier Ntcham appears to have had Celtic stay extended
Next Article “Be Part of the Magic” – Old Pros argue out the Aaron Hickey v Josh Doig Celtic left back debate