You are at:Home»Latest»Artur Boruc selects Celtic star in his career XI along with mercurial teammates

Artur Boruc has named Celtic’s Josip Juranovic in his best XI from across his career. Celtic were in Warsaw last month to play a game against Legia in honour of the great career that the big goalkeeper had. However, in the weeks following his retirement, Boruc has compiled a list of his best teammates across his glittering career.

The Celtic full-back played in Dingwall on Saturday and has been excellent since arriving from Poland last season. The Croatian Internationalist has been a revelation since joining Celtic as he helped Ange Postecoglou towards the Premiership and League Cup last season. 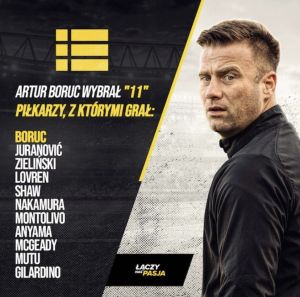 The Holy Goalie has decided to go with Aiden McGeady and Shunsuke Nakamura as his wide options. The players added flair and skill to Gordon Strachan’s teams from 2006-2009. McGeady and Boruc had a few noticeable falling-outs. The pair were separated after a training ground bust-up which resulted in Boruc smacking McGeady. Clearly, the Polish goalie doesn’t hold a grudge.

Boruc would make 221 appearances for Celtic, earning a number of plaudits as well as winning three League titles, two league cups and one Scottish Cup. Boruc, who signed from Legia Warsaw in 2005, was nicknamed the ‘Holy Goalie’ by supporters because he blessed himself before he entered the goal, which obviously upset Rangers supporters for some reason.

Previous ArticleQuiet on Celtic’s outgoings as Jullien, Ajeti and McCarthy are linked away
Next Article Celtic On This Day – 8th August – David Potter’s Celtic Diary