You are at:Home»Latest»BBC commentator states Celtic have agreed fee for World Cup star

BBC commentator Steve Wilson stated that Celtic had agreed a fee for Canadian full-back Ally Johnston. The CF Montreal defender started as the Canadians faced Croatia in Matchday Two in Qatar with Celt Josip Juranovic lining up on the other side.

Wilson told those watching the game that a fee had been agreed with Johnston set to become the next January arrival for Ange Postecoglou, following Yuki Kobayashi. Celtic are clearly continuing to work hard to make sure that they are improving and, with that, lining up replacements for potential departures – such as Juranovic to England or Spain. 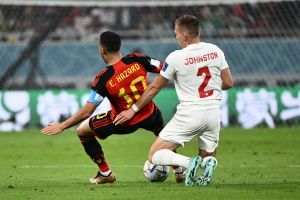 The 24-year-old is playing at the right side of a back three but has been unable to stop Croatia coming from a goal behind to winning 4-1. Incidentally, Juranovic was involved with the second goal assisting Marko Livaja to put the 2018 Finalists ahead.

When discussing the Canadian performance, Wilson said that we would be seeing some of them in England and ‘Scotland certainly for Alastair Johnston’, confirming again that the Celts are close to signing the young defender. Johnston and his Canadian teammates have earned plaudits for their level of performance, even if they will be knocked out this evening.