You are at:Home»Latest»Best in the world – Barca star praises Paradise

Barcelona goalkeeper Marc-Andre Ter Stegen has praised Celtic Park during a Q&A on Twitter. The 27-year-old answered fan questions as he encouraged fans to stay indoors during the Coronavirus, which has Spain in lockdown.

Ter Stegen was asked to share his thoughts about Celtic Park and the German ‘keeper referred to it as being ‘one of the best in the world’ and that he ‘would love to experience it again’.

One of the best football stadiums in the world! I would love to experience it again! 👏🏻👏🏻 @CelticFC https://t.co/LSR6zVCiRx

Ter Stegen played at Celtic Park in 2016 in the 2-0 win over Brendan Rodgers’ side. The German made some good saves to keep a clean sheet against a menacing Moussa Dembele. In the return fixture at the Camp Nou in September, in which Celtic were demolished an embarrassing 7-0, Dembele had his penalty saved by Ter Stegen.

Ter Stegen is just one of many global superstars that have praised the atmosphere at Celtic Park, with his ex-teammates Xavi, Lionel Messi and Iniesta all having previously stating their admiration for Paradise. 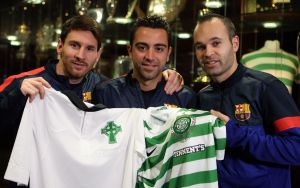 Xavi – “The atmosphere generated by the fans in Celtic’s stadium for our visit was the most impressive I’ve ever witnessed.”

Iniesta – “The Celtic fans are very special and the club and players can be very proud of them. They are the best I have ever heard.”

Messi – “The atmosphere their fans create make it a very special European night of football.”

Previous ArticleThe simple genius of John Hartson’s solution to end the title impasse
Next Article Dr John Conway: The First Man To Ever Kick A Ball At Celtic Park