You are at:Home»Latest»‘Best thing that’s ever happened to him’, how Scott Bain’s Fallout with Neil McCann led to Celtic move

Paul McGowan has explained how Scott Bain ended up falling out with Neil McCann, prompting him to leave Dundee and subsequently join Celtic on loan. The training room bust-up between Bain and McCann in late 2017 led to Bain being an outcast at Dens Park as McGowan told Si Ferry and co on Open Goal’s ‘Keeping the ball on the ground’ podcast.

Ex-Celtic youngster McGowan was asked if he knew what happened between his former manager McCann and Bain. The 32-year-old, who is still at Dens Park, filled in the blanks.

“We were playing a game. McCann always wanted to pass it from the back.

“Instead of just lying, knowing what Neil McCann’s like…McCann was like, ‘you wit?’ and Bainy said, ‘I told you to f*** off’.

“He left him out but it’s actually probably been the best thing that’s ever happened to Bainy in all honesty.”

It was rumoured that Bain had landed a punch on McCann, but McGowan didn’t mention any of that. He was forced to train alone but eventually got a move.

Bain went on loan to Hibs in the January but ended up signing for Celtic after Craig Gordon was injured. Bain made his debut in a 3-2 win at Ibrox in March 2018 and earned a four year deal that summer. In his time at Celtic Park, Bain has won two Scottish Premierships, two Scottish Cups and one league cup.

Bain has enjoyed a period as first choice keeper at the club until the start of this season as the resigning of Fraser Forster and an injury meant he fell down the pecking order under Neil Lennon. 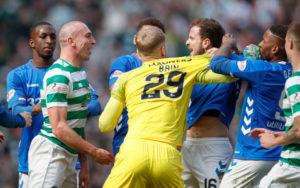 Not bad for what started out as a loan move.