You are at:Home»Latest»Bit-part players from Celtic’s 9IAR run: Miku

This series will look at players that were easily forgotten during the 9IAR run. The next entry is Miku from the 2012/13 season.

Nicolás Fedor (or Miku) was signed on loan from Getafe as the Spanish side’s top goalscorer. It was a move that was supposed to give Celtic a competitive edge on the European stage.

Despite appearing a competent player, Miku’s return was poor and struggled to force his way into the team. The trio of Stokes, Hooper and Samaras remained the preferred options of Neil Lennon in attack and injuries allowed Miku an opportunity on a Champions League night versus Barcelona. 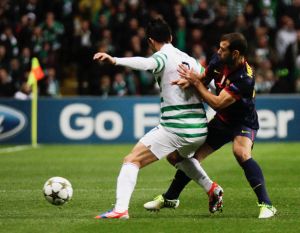 Miku started up front against Barcelona on a night that Celtic celebrated their 125th anniversary. The atmosphere was incredible and Miku played 90 minutes as Celtic won 2-1. The striker’s hold up play was impressive and it looked as if he might’ve proven himself in a Celtic jersey. However, it was the goalscorer, Tony Watt, that would push Miku further down the pecking order at Celtic Park.

Miku moaned about his time in retrospect but it was another poor striking signing, following on from Bangura the year before. Miku departed with a 2 goals in 14 appearances along with a League winners medal to his name.