You are at:Home»Latest»Bit-part players from Celtic’s 9IAR run: Nadir Çiftçi

This series will look at players that were easily forgotten during the 9IAR run. The entry from the Invincble season is Nadir Çiftçi.

Nadir Çiftçi was signed in the summer of 2015 from Dundee United by Ronny Deila’s Celtic; however, he struggled to make an impact, scoring 4 goals in 22 appearances. The Turkish striker would have been hoping that the arrival of Brendan Rodgers might bring out the best in him. However, across the season, he made four appearances with just one coming in the league. 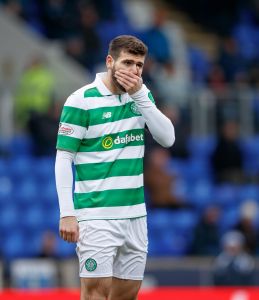 Çiftçi made two surprising appearances came at the start of February 2017, shortly before his loan move to Poland. The striker’s only league appearance that season came in the 5-2 win over St Johnstone at McDiarmid Park. Çiftçi replaced Roberts with five minutes remaining; however, he played his part – albeit a tiny part in the league success that year.

Previous ArticleGreece teammates will be bemused by Belfast hostility towards Giorgos Giakoumakis
Next Article Twice as Good – Harry Hood’s first taste of international football, this week in 1967