You are at:Home»Latest»Bitton Keen to Stay, Over to you Mr Lawwell

Nir Bitton has confirmed his intent to stay at Celtic but only Peter Lawwell will make the decision on whether the Israeli International will remain in Glasgow.

The 28-year-old has been at Celtic since 2013 after joining from FC Ashdod and has become a mainstay in the side since then operating as a defensive midfielder or a central defender.

Bitton’s contract is due to expire in the summer yet the versatile player is keen to extend his stay but only if Peter Lawwell sanctions it, as reported in the Scottish Sun.

“It’s something you need to ask Peter Lawwell about instead of me!

“But I love this club and I want to stay. I am settled here, my kids live here, so we will see what happens.” 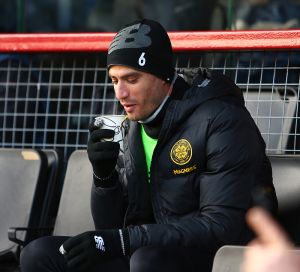 Bitton was called upon on Sunday in the League Cup Final after Frimpong’s red card, he entered the fray and helped a dogged Celtic see out a 1-0 victory over Rangers. The versatility of Bitton is his biggest attribute as the experience in both positions compliment the other, he is comfortable on the ball, in the air and reads the game well. His performance at Ibrox in September was commanding beside Christopher Jullien and he adds a good option as back-up in defence.

He has won 14 major honours since signing, having the winning mentality that since Brendan Rodgers’ first season has taken Celtic to Ten Domestic Trophies in-a-row.

Previous ArticleThree Weeks to the Window Opens, Rumour has it
Next Article Caldwell Highlights Gulf in Leadership with dig at Tavernier and Praise for Broony