You are at:Home»Latest»Bizarre reports link Celtic with signing a fourth right back with move for Ajer’s international team mate

Sometimes you see a transfer rumour that makes so little sense, it actually makes you wonder if there’s something to it. No way can any “journalist” be that ill informed, so it must’ve come from somewhere.

Celtic look strong all over the pitch, but the right back spot is particularly stacked right now. Hatem abd Elhamed looks solid, Jeremie Frimpong is exciting and looks like a top class prospect while Moritz Bauer brings hair, a big throw in and versatility at the back.

Despite that, HITC have linked Celtic with a move for another right back. In some fairness they do indicate it might be completed next summer due to the player’s contract expiring, so it might even indicate the club have no interest in keeper Bauer on a permanent basis.

The report quotes The Mail as suggesting that Kristoffer Ajer’s Norway teammate Omar Elabdellaoui could be joining Celtic next Summer. He’s an attacking right back who plays for Olympiakos in. He currently captains the Greek side so you have to think he would command a decent wage, and would definitely want to start. 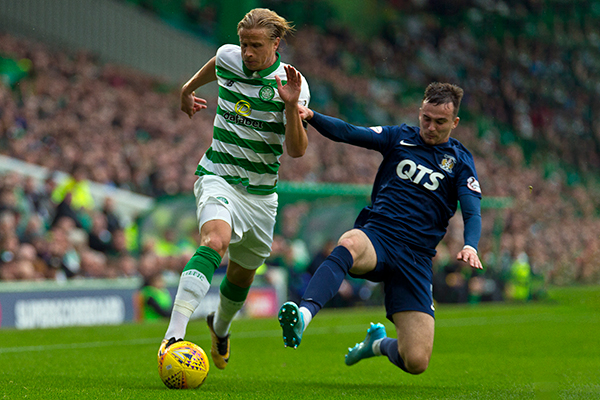 Is this a sign that Bauer may leave after this season?

That would also call into question the futures of Frimpong or abd Elhamed. The youngster is one of the most exciting players in the team and needs to play to keep his development going. It’s possible that Lenny might see the Israeli playing more of a centre back role, but he wouldn’t start there either.

Clearly Ajer would be able to give his manager a decent report on his Norway teammate and might feel he could add something to this Celtic team, but it does seem like a strange link at this point when you consider the current squad.