You are at:Home»Latest»Boli Bolingoli opens up about the pressure of playing for Celtic

Boli Bolingoli had a rough start to life at Celtic. He looked extremely shaky in his first few appearances for the club and combine that with the fact that he was expected to replace Kieran Tierney, who had just left for Arsenal, and the pressure was very much on the Belgian.

He has done very well since then though. While lesser players would have wilted under the pressure after those first few performances and preferred hiding away on the bench, Bolingoli has established himself as Neil Lennon’s first choice left-back with Scottish international Greg Taylor firmly behind him in the pecking order.

His form has also coincided with the team’s as Celtic are absolutely flying at the moment. There was widespread panic among the fans after the Bhoys got eliminated from the third round of Champions League qualification but they have not looked back since then. Neil Lennon’s side are currently 5 points clear at the top of the Premiership table, have already won the Scottish League Cup and qualified for the last 32 of the Europa League where they will face FC Copenhagen. 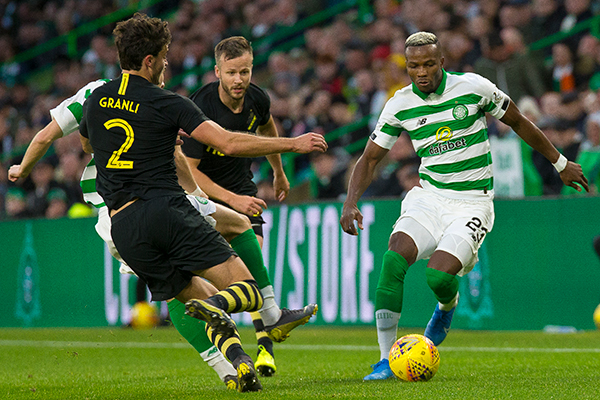 Bolingoli has now opened up about the pressure of playing for Celtic. Speaking with Daily Record, the Belgian said:

“Of course, pressure is always good if it’s healthy. It can push you up and make you perform.

“It was a bit like that at Brugge but not like here at Celtic. I wasn’t playing all of the time there like now, for example.

“Mentally we are very strong. We just try to do our job and you see the whole team is doing well. Personally, I’ve just come back from injury but I feel I am coping.

“I actually feel more of the pressure here that we have to win every game but I can’t complain, it feels good.

“As a player you want to win every game and here at Celtic we know we have to.”

The Hoops fans are certainly very demanding of their team and rightfully so. The club are challenging for a record-equaling ninth straight league title this season and there are faint whispers of a quadruple as well.