You are at:Home»Latest»Boxer Witnessed Boxing At Celtic Park, The Strange Story Of Sean O’Grady’s Parkhead Parade

Celtic Park has a long association with boxing. The stadium was first used to host an official bout on 2 June 1937, when 20,000 fans saw the legendary Gorbals character, Benny Lynch, suffer a rare points defeat to Jimmy Warnock. The fight was made at 8st 4oz that night, but Lynch came in at 8st 2lbs, which resulted in a £200 purse increase for his Belfast born opponent. 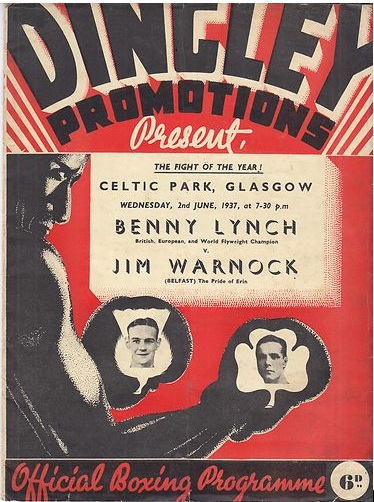 Paradise had to wait until 18 May 1949 to host its first title fight. Harry Hughes of Wishaw topped the bill in a bout against Billy Thompson from Hickleton Main that night. The main event drew a crowd of 15,000 people, who saw the English fighter become British Lightweight Champion, by way of technical knockout in the fifth round.

Celtic Park has been visited by multiple boxing legends: Jim Corbett, the immortal Muhammed Ali, Pat Clinton, Sugar Ray Robinson and Sean O’Grady. The latter visited Paradise in the most unusual and chaotic of circumstances. O’Grady was due to fight Scottish hero, Jim Watt, for the WBC Lightweight belt at Kelvin Hall in November 1980. A week prior to the event, the Oklahoma cowboy approached Celtic to ask for assistance in promoting the fight. The club were willing to oblige, inviting the ‘Bubble Gum Bomber’ to make an appearance on the pitch during the half time interval of Celtic’s upcoming clash with Kilmarnock on 25th October (1980). 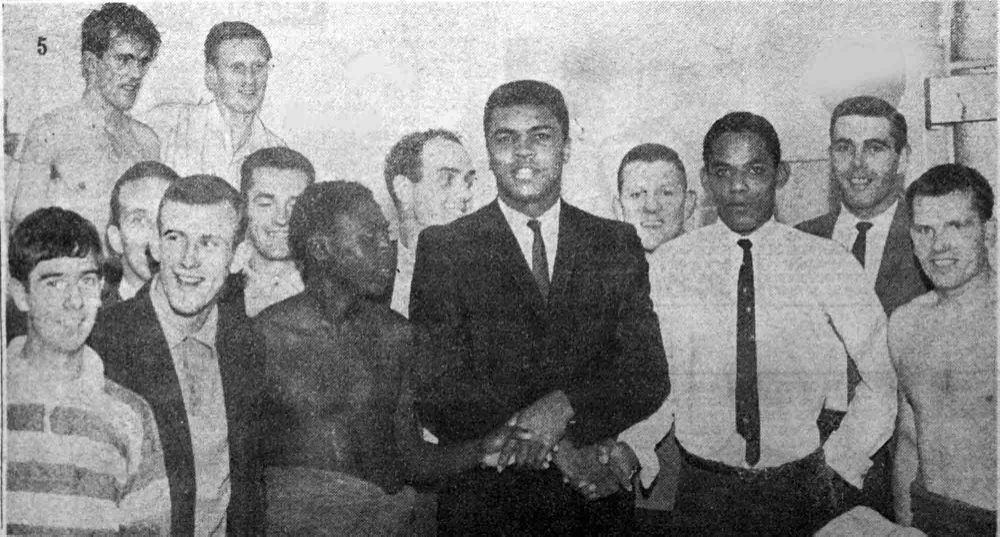 The great Ali with some familiar faces

The 21-year-old arrived at Celtic Park in full country and western apparel. He was treated to a thrilling first half of football as Frank McGarvey scored in the 44th minute to put the Hoops 2-1 in front, Celtic having trailed early on. The noise had barely abated by the time Sean O’Grady took to the field in front of the home support. He had clearly been well advised, as the American boxer circulated the pitch before removing his denim jacket to reveal a Celtic jersey. Suddenly, the dynamics were changed, and polite applause turned into a rapturous cry of “One Sean O’Grady, there’s only one Sean O’Grady.” Kilmarnock fans had taken exception to the Celtic faithful cheering for the opponent of a Scottish national boxing hero such as Jim Watt. Before a second loop of the chant was heard, a scrap suitable for the undercard broke out at the unsegregated, traditional ‘Rangers End’ of the stadium. O’Grady looked on, cutting a perplexed figure, whilst the Jungle serenaded him with a rendition of The Soldier’s Song as the crowd trouble fizzled out!

Much was made in the media about O’Grady having an Irish-Catholic background. It was claimed that Celtic had only given him a platform to promote himself for this reason. However, the press were made to look foolish when it transpired that O’Grady had no such heritage, despite the connotations associated with his surname. Nevertheless, many newspaper reports hadn’t found out this fact until after the fight, which they had attempted to build up as a Catholic v Protestant affair. The fact that Jim Watt was a Rangers fan was also thrown into the mix, in an attempt to fan the flames of fire. Though, Watt soon extinguished any controversy when he made it known that his son was a Celtic supporter. 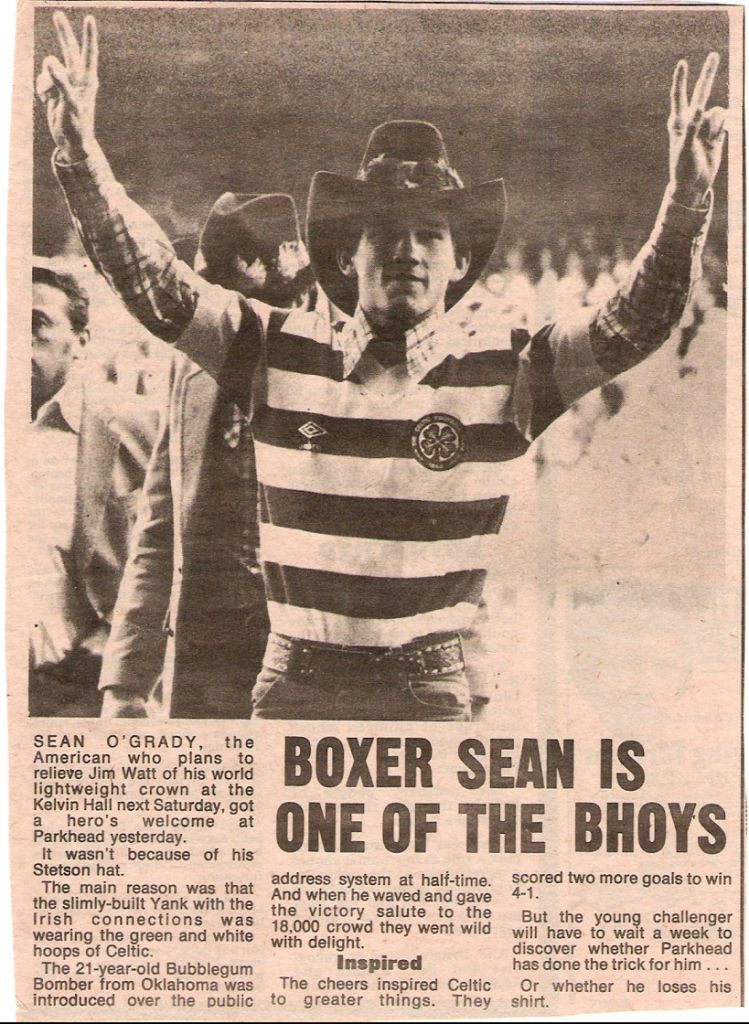 Ironically, the fight took place the day before a Glasgow derby game. The bout needed no sectarian or football supporting element to inspire the crowd, as Sean O’Grady performed a boxing masterclass in the ring. The non Irish-American, wearing green shorts emblazoned with a shamrock (his father, Pat O’Grady said this was done for “Cosmetic reasons”) came forward and threw a right hook, which Jim Watt anticipated, ducked beneath and countered with a left hook over the top. In doing so, the Glaswegian accidentally headbutted O’Grady, resulting in a horrendous cut. The fight had to be stopped in round 12 and the Scot could relax, having retained his title by a stroke of good fortune after being dominated.

Sean O’Grady demanded a rematch, but his plea fell on deaf ears. He regathered himself to become a world champion in his next fight and went on to have an incredible career, which saw him inducted into the World Boxing Hall of Fame in 1992. He retired at the age of 24, having amassed remarkable stats of: 81 wins (70 by knockout) and 5 defeats.