Brendan Sweeney is a man to whom many Celtic supporters owe a great deal of gratitude. He was one of the members of Celts For Change, who helped to oust the old board and pave the way for Fergus McCann’s arrival. Without the likes of Brendan, we would have no club.

When I met Brendan a few years ago he came across as a humble, unassuming man. Many others have reported a similar experience in his company. Rather than shout about his role in the 90s, he seems to do his talking in print.. and what a magnificent job he did with his debut book a few years ago – Celtic: The Early Years. That publication looked at the years 1887-1892 in forensic detail.

Those very early days of the club have always fascinated me. It’s a period of Celtic’s history that I have studied at length. Indeed, I wrote a profile on each of the founding fathers of the club, telling their incredible stories in life, religion and politics. This collection of profiles on the men behind the formation of Celtic Football Club were collated to form the first section of a book recently published by The Celtic Star, Walfrid & The Bould Bhoys. In the book, I touch on the views and roles that many of the founders and early committeemen had surrounding the shift of the club’s status to becoming a limited company.

The issue of limited liability status was very complex and very bitter. It saw many friends and Celtic pioneers fall out with one another and presented a whole range of issues. This leads nicely into Brendan’s new books, aptly named The Battle For The Club’s Soul. Notice the plural ‘books’, this is quite deliberate as so detailed is Brendan’s research and analysis, that The Battle For The Club’s Soul is split into two 400+ page volumes!

I was absolutely delighted to receive my copies yesterday and have already began reading about the grand opening of the new Celtic Park. Many sources such as The Catholic Observer have been quoted, providing so many previously unknown details; an absolutely incredible reflection of the work Brendan has conducted as such archives can only be found by visiting the Mitchell Library.

Brendan Sweeney spent five years researching this period of the club’s history and it shows. This really is essential reading and was described to me as “Bringing the Mitchell to your home.” It does that and much, much more.

The Battle For The Club’s Soul tells the story of the heart wrenching internal struggle that took place behind the scenes, as the club rose to prominence on the field. At stake was the club’s very raison d’etre, our charitable ethos after Brother Walfrid departed to London in August 1892. The membership split between the traditionalists and the business types and it threatened to tear the club apart.

Alongside Brendan’s previous book (Celtic: The Early Years), The Battle For The Club’s Soul presents an epic journey through the first decade of the club, where the off pitch story was as remarkable as the on field antics. Volumes one and two chart and dissect every move between 1892 and 1897. The story is a classic example of why Celtic is so much more than a football club. 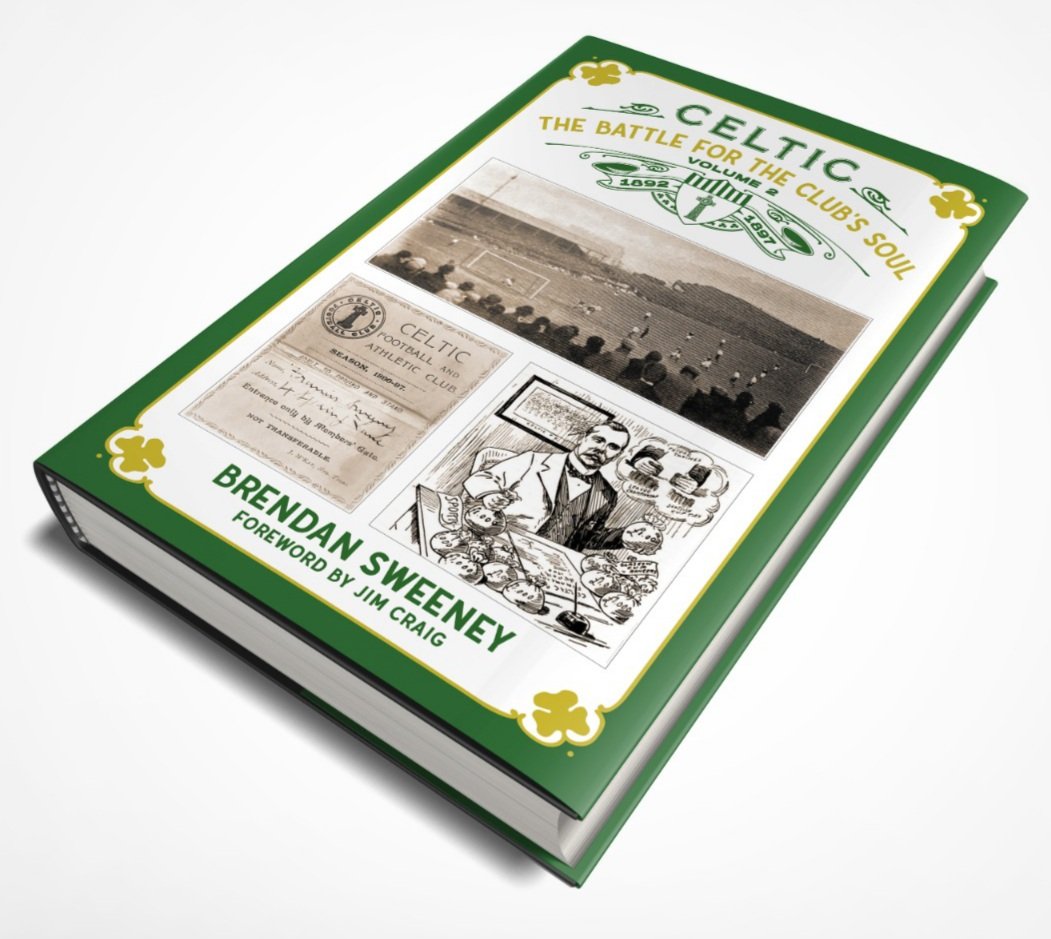 Aside from the heavy topics, which thoroughly intrigue me, there are interesting tales such as the first time that ball boys are used at Celtic Park, players being banned for a month, riots at Abercorn and Celtic denying any connection with the circus! There are also key stories in relation to Celtic’s identity and heritage – as TD Sullivan sings God Save Ireland at an after match social, Celtic President John Glass addresses the Irish National Foresters and the club fulfill charitable matches in support of the Whitevale Catholic Refuge.

Naturally, there are dozens upon dozens of other stories and amazingly interesting tales that I have omitted: Shamrocks sent to Ibrox on St Patrick’s Day, renovations to the stadium and plans for both undersoil heating and floodlighting being discussed. The list is endless. This is essential reading for those with an interest in Celtic’s identity, interesting anecdotes and the defining period as the club battled for its soul in becoming a professional outfit and a limited company.

Thanks big time to my good friend Brendan Sweeney for the 2 latest editions of his incredibly painstaking work producing these two cracking books. Brendan is easily up there with Pat Woods & Tom Campbell.Look no further for a total Xmas gift @EarlyCeltic ☘️👏 pic.twitter.com/u4HgPmxFyv

Brendan Sweeney is one of the most humble and unassuming Celtic fans I've ever known.
When training for the John Thomson Walk to Fife in 2011, @CelticResearch introduced us both. We walked for 14 miles talking everything Celtic. Not once did he mention his role in '94.
Not once. https://t.co/DjwQYCZoMe