You are at:Home»Latest»Brighton reportedly set to make £20m move for Odsonne Edouard this week

Brighton look set to launch a £20m bid for Celtic’s Odsonne Edouard this week. According to Mail Sport’s Stephen McGowan, the Premier League side are waiting until after Celtic’s Champions League Second Qualifying Round Second Leg against FC Midtjylland before submitting their bid for the Frenchman.

Crystal Palace are also reportedly interested in bringing the 23-year-old that has been with Celtic since 2017. Edouard joined on a season-long loan from PSG before sealing a £9m deal after impressing. Edouard has scored 83 goals and assisting 39 times in 169 appearances for the club. 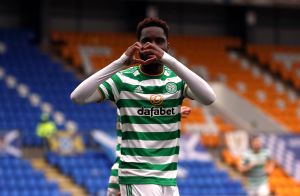 A reunion with Brendan Rodgers at Leicester City had been the expected destination for the French U21 Internationalist. However, the Premier League side decided to go for RB Salzburg’s Daka due to complications relating to the deal for Edouard.

It is widely expected that he will leave the club this summer but only if Celtic can obtain their required fee. £20m with significant add-ons would represent good value for the player that has just one year left on his deal. Brighton and Palace represent moves to more competitive leagues but the teams would be a step down considering the end of the table that they normally reside.

Postecoglou has added Kyogo Furuhashi to compete with Albian Ajeti for a place in the starting XI if Edouard moves on with Leigh Griffiths as an added option, if he remains at the club.

Previous ArticleAnge Postecoglou wants at least four more players signed, according to journalist
Next Article “I cried tears of joy watching Jimmy Johnstone” – Why I became a Celtic supporter