You are at:Home»Latest»Bringing Back the Thunder, Ntcham Reckons Euro Foes Fear Celtic

Olivier Ntcham has said that Celtic will welcome any draw and fear no one, based upon their Group E heroics. In a group with Lazio, Rennes and Cluj, Celtic finished with 13 points including 4 wins, 1 draw and 1 defeat. The performances across the course of the group proves that Celtic are a force to be reckoned with and their opponents know that.

Ntcham captained the Celts in Transylvania as they fell 2-0 to Cluj with a much-changed team. The 23-year-old was delighted that Neil Lennon praised him but is now looking forward to Monday’s draw in Nyon to decide who Celtic will face in the Round of 32 – as reported in the Scottish Sun.

“I don’t really want to speculate on who our opponents will be in the next round. We will take anyone.

“But I think clubs may fear facing Celtic because we have shown how good a team we are.” 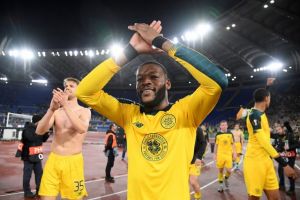 Ntcham was the Hero of Rome

Ntcham scored the winning goal in the dying minutes of the game at the Stadio Olimpico that sealed Celtic’s progression into the Last 32.

The Frenchman suggested that his manager’s confidence in him has made him happier, despite the fact that Ntcham has been limited in terms of starts this season; however, he seeks to improve upon Thursday’s opportunity to captain the side and prove to the manager that he deserves to be in the team.

“I didn’t hear what the manager said about me, but if it was nice I’ll take that!

“He always gives me confidence and it’s great to know he’s noticing it in my play.

“It was a little bit frustrating at the start of the season, but now I’m playing a little bit more and I’m happier as a result. I’ve been training well and we all know we have to work hard in training to prove to the manager we deserve to be in the team.”

Ntcham is aware that the squad will be vital in the coming weeks as Celtic look to increase their two point lead over Rangers before the Glasgow Derby on the 29th of December – which will act as a blockbuster finale to the calendar year before the players go to Dubai for a winter break.

“Our squad will be really important during the next few weeks.

“We’re all looking forward to the winter break.

“But we always want to go away with good results behind us, then we can enjoy the trip to Dubai.”

Ntcham will be hoping to be part of Neil Lennon’s side that hosts Hibernian on Sunday as they look to bounce back from Thursday’s defeat to Cluj.

Christie Reflects on Potential Move from Celtic with No Regrets