You are at:Home»Latest»Broadcaster tells Celtic to sign son of former Rangers midfielder as Scott Brown replacement

Peter Martin has told Celtic to sign Aberdeen’s Lewis Ferguson as a replacement for Scott Brown. The PLZ Soccer host said that given Celtic’s failure to sign John McGinn in 2018, the club needed to act quickly and not let Ferguson slip through their fingers, even if he comes from a family with a strong connection to Ibrox.

Scott Brown will end his fourteen year association with Celtic in the summer, heading for Aberdeen. Brendan Rodgers identified John McGinn as the successor to Brown in Celtic’s midfield. However, owing to the club’s penny pinching, Aston Villa swooped in and signed the midfielder. The departure of Celtic’s captain Brown this summer is part of an enormous overhaul at Celtic and the move for a player that has proved to be an aggressive competitor could be exactly what Celtic need according to Martin on PLZ.

“They made a blunder in not getting John McGinn. But if I was looking at the recruitment of the best of somebody in Scotland that I thought could come in and do a really good job, can mix it up a bit, I would go out and get Lewis Ferguson.

“I’ve been consistent about that for the last year. I don’t care about some people who don’t like the fact that his two family members played for Rangers. I’d go out and get him. He’s the kind of player I like, just a wee bit about him.” 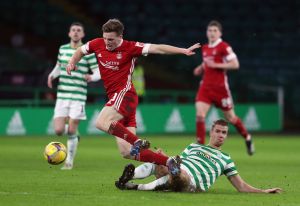 Ferguson’s dad Derek and his uncle Barry played for Rangers. They are a family with an enormous association with Ibrox and it had been expected that Ferguson would one day join Rangers. The 21-year-old has been a consistent performer at Pittodrie, having made 121 appearances for The Dons, scoring 21 and assisting 22 times.

Previous ArticleFor me, the Lions clinched 6-in-a-row on this day in 1971, in their last-ever appearance together
Next Article Photo: North Curve Celtic reveal Scott Brown charity tee