You are at:Home»Latest»Report: Broony’s Paradise Parade ends in 4-0 drubbing of sorry Saints

Scott Brown was awarded Man of the Match in his final ever game at Celtic Park, as Celtic romped to a 4-0 win over St Johnstone in front of their long-serving captain, on an emotional night at Celtic Park.

Broony marked his final goodbyes with his 404th league game for the Hoops’ at Paradise – something only seven players can laud over him in what has been an incredible stint in the East End of Glasgow. Elsewhere on the pitch, Greek goalie Vasilis Barkas entered the fray, whilst 18-year-old Adam Montgomery made his first senior appearance for the Bhoys’.

The first chance fell to the visitors; some stellar work down the right hand side found Chris Kane unmarked just outside the six-yard box, but the Edinburgh-born striker glanced his header wide when he should have put the Scottish Cup finalists 1-0 up inside ten minutes.

Celtic seldom threatened to create chances in the opening knockings of the game; a few Ryan Christie attempts from distance proved to be the Bhoys’ best sighting of a goal, but as we have seen all too often this season, the midfielder’s efforts didn’t trouble Zdenek Zlamal at all.

Celtic’s first real opening was via a mistake from the away side; Moi Elyounoussi found space down the left flank, and despite his best efforts he couldn’t quite locate Odsonne Edouard waiting in the wings as Celtic started to ramp up the pressure.

And their early burst proved dividends just two minutes later after another well-taken finish from David Turnbull. The recently-crowned Young Player of the Year was given a golden chance from an indirect free-kick after a mix up in the St Johnstone defence; and after Christie tapped the ball to him just inside the area, the summer signing drilled a shot low into the bottom left corner to give the Celts the lead in Brown’s swan song. 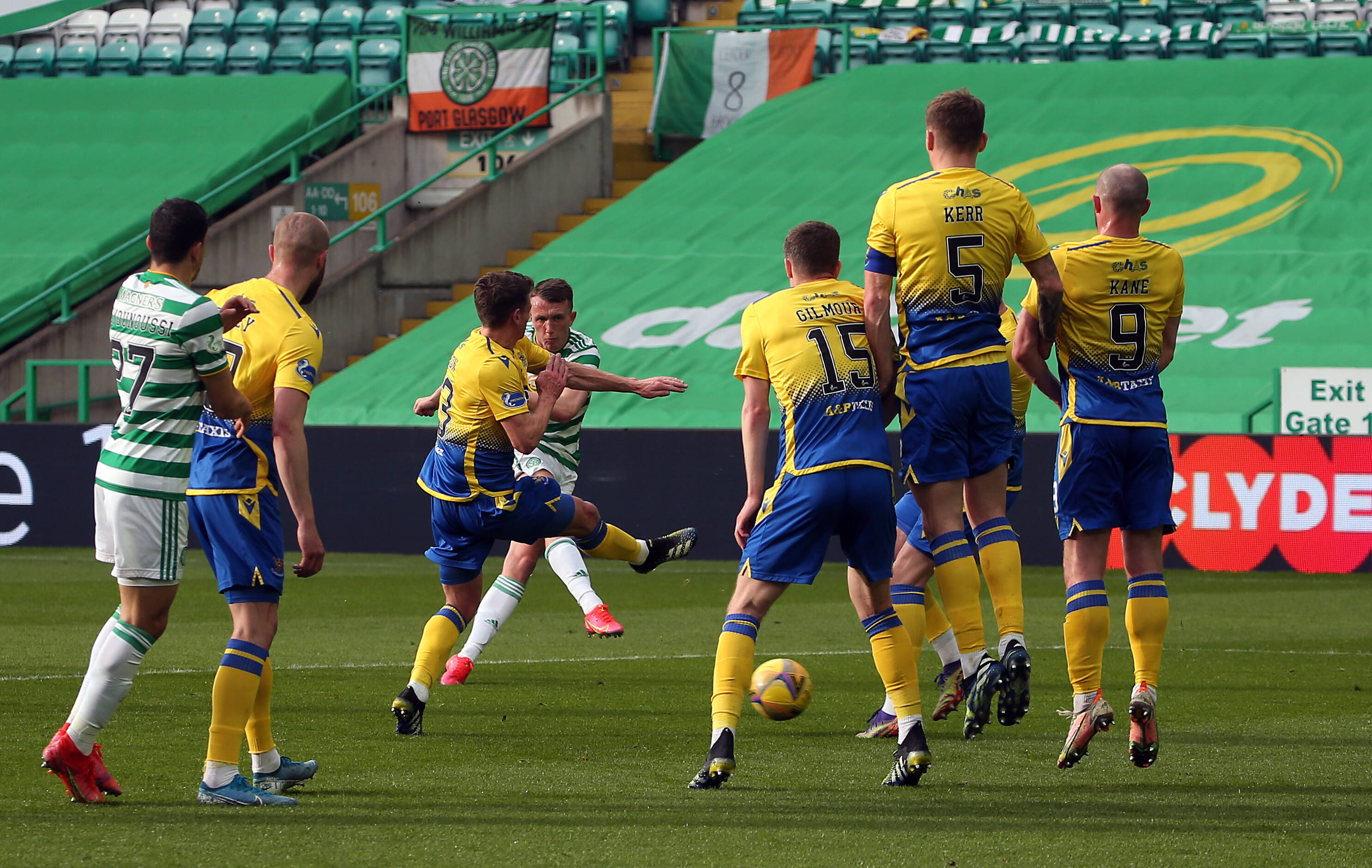 It got even better just two minutes later. After sensational composure from Odsonne Edouard. A brilliant long-ball from Broony on his final Celtic Park appearance found French Eddy in behind; with the wantaway striker taking a beautiful touch to wrong foot the defender, before a quintessential chip from the Frenchman outwitted Zlamal to double Celtic’s lead inside sixty seconds. 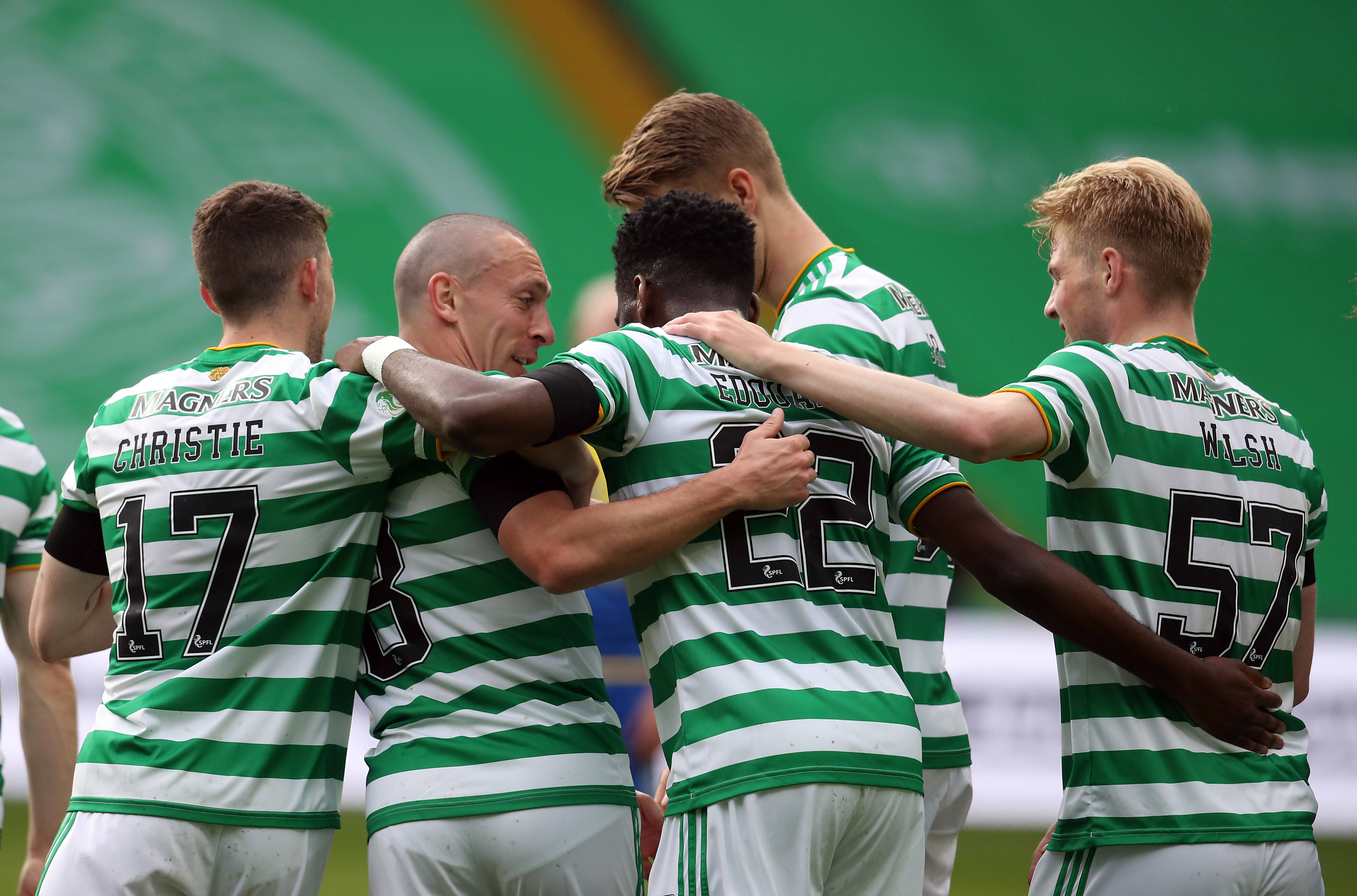 It was almost three in as many minutes following the quick fire double; A corner worked its way out to Jonjoe Kenny, who fired the ball with aggression across the six-yard box, but the ever lively Edouard’s flick didn’t have enough demeanour about it, glancing just wide of Zlamal’s right-hand post.

St Johnstone almost got straight back into it as the half burst into life out of nowhere following a lacklustre twenty minutes. A poor headed backpass from Jonjoe Kenny – likely making his final appearance at Paradise – found Kane waiting in the wings, however he couldn’t replicate what Edouard had done moments before as his dinked effort was matched by Barkas.

This was arguably Celtic’s strongest performance of the season up to press; Turnbull was given the opportunity to double his tally from a tight angle in the box, however his usually consistent strike wasn’t to be as it fizzed wide of the post as the Celts went in 2-0 up at the break.

Kennedy’s men came flying out of the blocks after the break, starting in the same manner they went into the changing rooms with. Some good work down the right found Kenny who blazenly fired over, and moments later a great ball into space by Captain Broony ended up with Odsonne Edouard almost dinking the keeper, but he couldn’t quite reach it to extend Celtic’s lead.

The Saints almost got back into it shortly after; some neat play on the edge of the box found Craig Bryson in a similar position to Turnbull had just a few yards out, but in similar fashion he passed his chance up.

Celtic started to control the game a touch more following the scare from Bryson just moments earlier; it was only St Johnstone’s second real opening of the game, and Celtic needed the presence in midfield to stop any comeback forming whatsoever.

Yet, that midfield presence was not to be Scott Brown anymore. 619 appearances, 22 trophies and 13 years after his debut, it was to be Brown’s final knockings at Celtic Park. It was done in front of an empty crowd, in a dead rubber game, but there was no denying the emotion ringing around Celtic Park and numerous houses across the world, who all showed their support online for their long-serving captain – and this was rightly rewarded with the tannoy announcer awarding him Man of the Match. 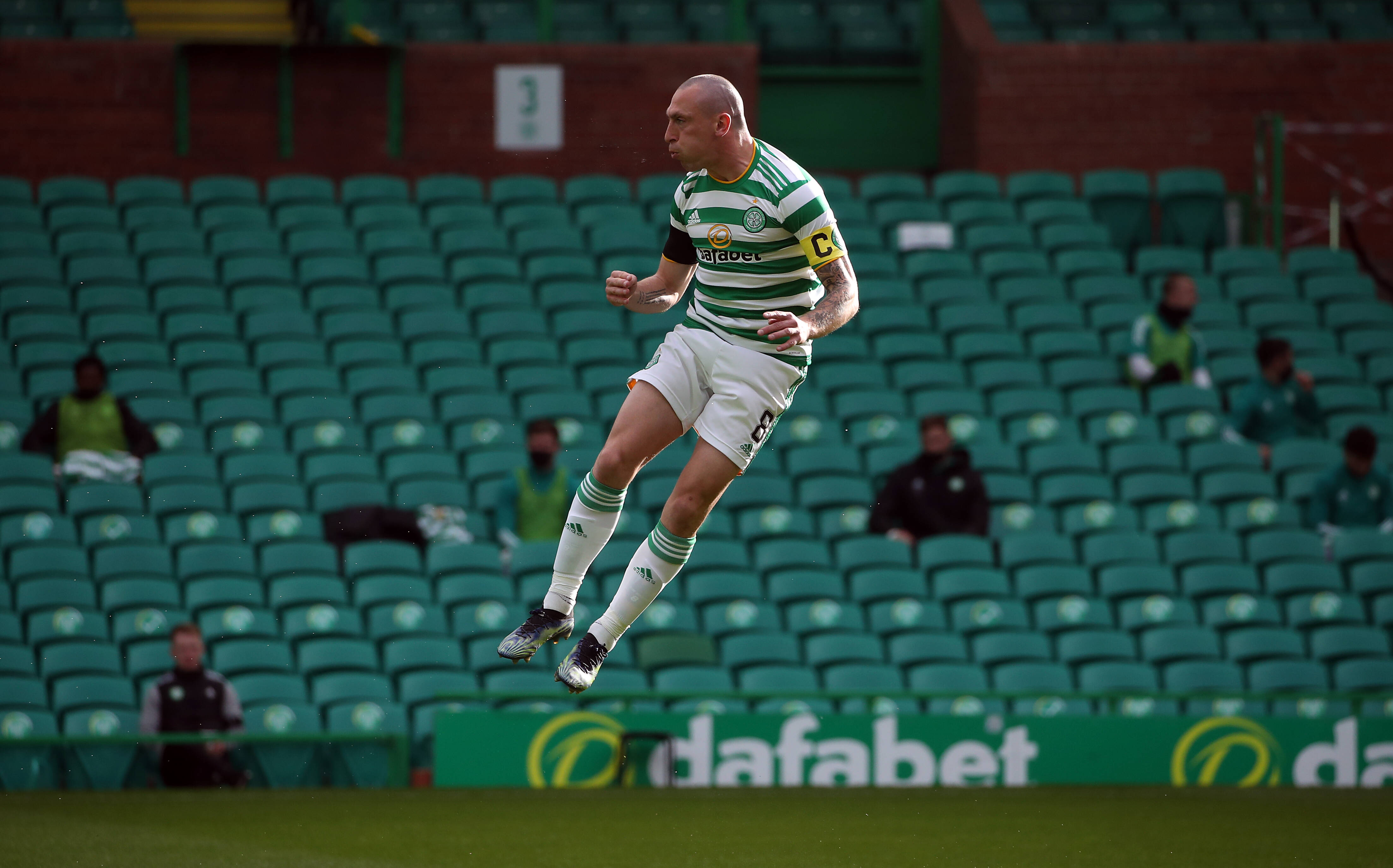 Celtic v St Johnstone – Scottish Premiership – Celtic Park Celtics Scott Brown runs onto the pitch for his final home match for the club during the Scottish Premiership match at Celtic Park, Glasgow. Picture date: Wednesday May 12, 2021. Use subject to restrictions. Editorial use only, no commercial use without prior consent from rights holder. PUBLICATIONxINxGERxSUIxAUTxONLY Copyright: xAndrewxMilliganx 59728730

There was almost due cause for celebration seconds later; a brilliant direct ball found Forrest in acres of space, and his cross found Edouard with an easy shot on goal – however, Saints defender Shaun Rooney valiantly blocked his effort, only for the ball to fall to Elyounoussi. However, the Norwegian inexplicably fired the ball straight at the grounded Edouard with the keeper AWOL; the ball looping off the Frenchman and behind the net.

Celtic were now peppering the goal with attempts as they found their fifth gear; Greg Taylor looked to emulate Kieran Tierney’s howitzer against Kilmarnock all those years ago with a rasping drive of his own towards the top-right corner, but Zlamal finally made a contribution by getting himself firmly to the ball with an admittedly strong hand. Another strong showing from Celtic’s full-backs almost resulted in the long elusive third goal – a beautiful whipped ball by Jonjoe Kenny found Leigh Griffiths, who had come on for Odsonne Edouard, although the Scotland international’s header flashed just wide of the goal.

And, for all their hard work, Kennedy’s men were finally rewarded as it was three just seconds later. Some brilliant play from Taylor – who had been as brilliant as he’d ever before – found Kristoffer Ajer in acres of space. The Players’ Player of the Year took his time to place a shot at a St Johnstone defender, but with the ball looping ferociously over Zlamal and into the roof of the net, it only ensured to wrap things up for John Kennedy’s men.

It seemed everyone was in party mode for Brown’s leaving celebrations; even diminutive prodigy Karamoko Dembele, who had come on for Forrest and never scored a senior goal for Celtic before, got in on the act. Using his speed to find the right-hand channel, the typically left-footed Englishman bamboozled the defender before firing a shot across the helpless Zlamal into the bottom right corner to leave the game in no doubt whatsoever, resulting in a 4-0 win in the final league game of the season at Parkhead.

Previous ArticleOpinion: The Lines Between Politics And Humanitarian Issues Have Been Blurred
Next Article “My captain forever”; Celtic fans react to Brown’s Paradise farewell