You are at:Home»Latest»‘Brought The Car Up To Scotland And Had A Brilliant Celtic Day’ – Part 3

If you have followed my previous articles about my day of Celtic history last week then you’ll know that In Part 1 we visited Arkleston Cemetery and the graves of Patsy/Willie Gallacher, and in part 2 we visited St Conval’s Cemetery stumbling across the final resting places of Tommy McInally and Joe Dodds. Both articles have unique stories and information about each former Celt, which was part of the research that myself and my friend John conducted when visiting these sites.

The final leg of our journey took us to Viewpark and for this former Celtic star, we had no need for research nor was there any search to find him. It was of course the greatest ever Celt, Jimmy ‘Jinky’ Johnstone who we went to pay tribute to.

I had never been to Viewpark and nor had John, despite John being a Glasgow man for over 50 years. We arrived at the Jimmy Johnstone statue & memorial garden and parked in one of the neighbouring streets, where Jinky lived. We both commented how “normal” the estate was and that was incredible to think that a footballing superstar lived in such ordinary surroundings. After all, Jimmy Johnstone was not just a Celtic icon, but a worldwide football legend. He famously had the Bernabeu cheering “Ole!” every time he touched the ball during Alfredo Di Stefano’s Testimonial and he was third placed in the 1967 Ballon d’Or. That should not be forgotten. Jinky was among Eusebio, Cruyff, Best, Muller etc. in terms of football icon status at the time. Yet he was humble, normal and Celtic through and through. In fact, Johnstone actually finished above Cruyff, Best, Muller, Eusebio and Beckenbauer back in that season’s Ballon d’Or awards. (Bobby Charlton was 2nd and Florian Albert won it)

When at the memorial garden we got our pictures taken with the statue of Celtic’s greatest ever player, who spearheaded the Lisbon Lions to continental glory.

Brought the car up to Scotland and had a brilliant Celtic day… pic.twitter.com/IwQLXexd6w

Behind the statue is a bench, in front of which a Celtic crest adorns the tiles and solar lights line the patio. At the front, Jinky’s birth and death years are painted on the railings alongside shamrocks. All of this is put together by a group of Celtic supporters who maintain it. They do a grand job.

It was back to the car next, once more walking the streets where Jimmy Johnstone would have roamed so many times before us. Our next destination was a mile up the road to Bothwellpark Cemetery, where his grave is situated. After realising that we were looking at the Commonwealth War graves, we noticed a second part of the cemetery and quickly found Jinky’s towering headstone with Celtic scarfs hanging off it and the inscriptions “Greatest Ever Celt,” and “You’ll Never Walk Alone,” engraved on the front. We were paying tribute to an absolute genius and one of the finest footballers of all time. 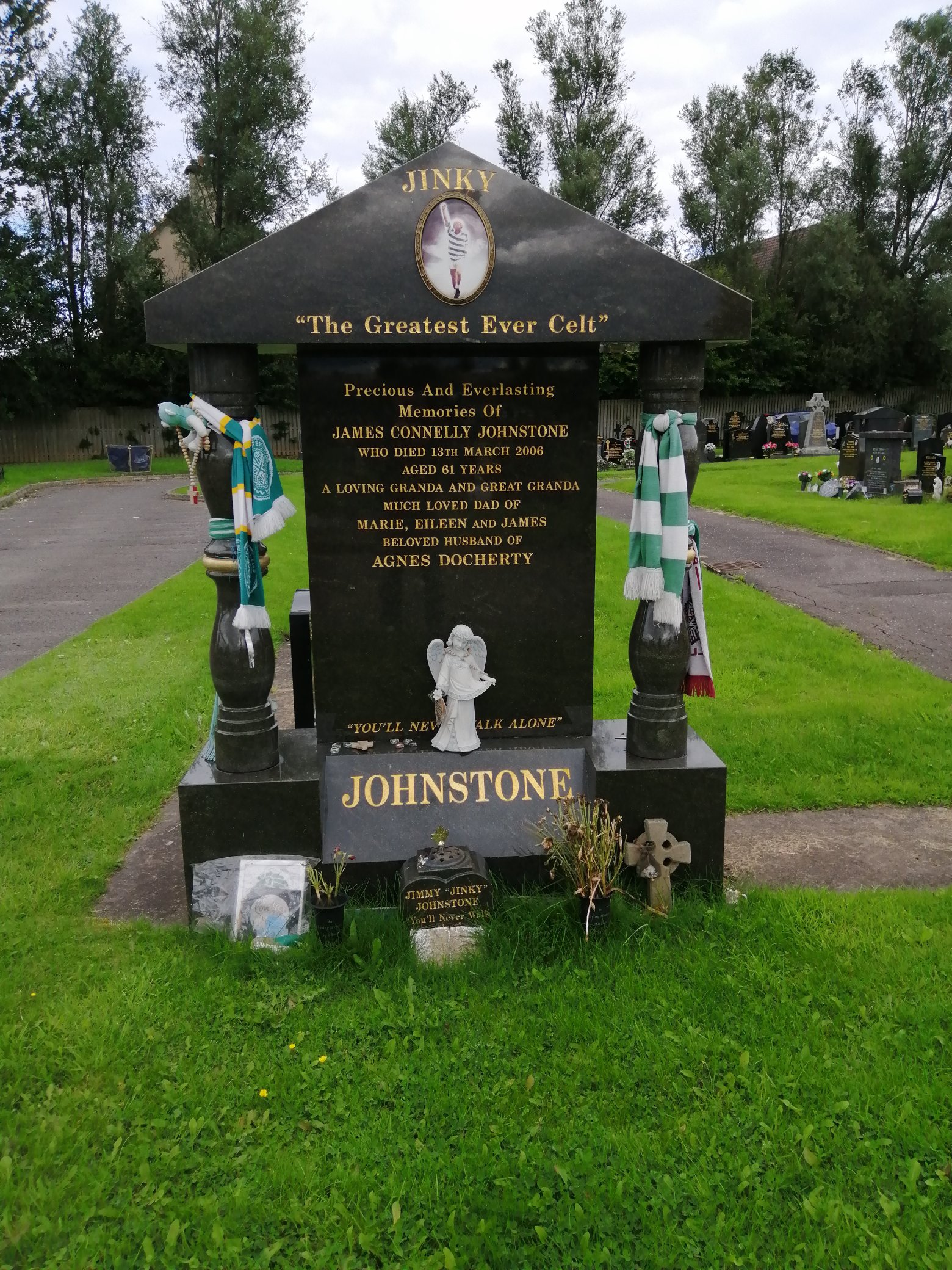 Jimmy once said: “I was always an entertainer. The pitch was my stage, the whistle meant it was showtime.” How true that appears to be going by the video footage of him running rings round Rangers, Leeds and Madrid defenders among others. If that wasn’t enough then the accolade of being voted the greatest ever Celt and the praise of his Lisbon Lion colleagues certainly confirms his greatness for anyone who, like me, was born after he had retired.

As a child Jinky would practise his skills for hours. His first footballing hero was Stanley Matthews and thus Johnstone copied his training method of dribbling a ball between milk bottles lined up… only Jinky did so in bare feet! He was given greater inspiration to achieve all he could, when his older brother, who Celtic were tracking, suffered a terrible injury and had to retire. However, few could have imagined that he would lift the European Cup and become one of the absolute greatest footballers in history.

Ironically, on a trip to play football in Manchester as a kid, Johnstone was spotted by a scout from Stanley Matthews’ club, Manchester United! However, a Celtic fan named Frank Cairney warned United off, under the lie that Jinky was going to Celtic. He then swiftly contacted a Celtic scout that he knew, named John Higgins, who invited Jimmy to train with the Hoops for two nights per week. But for that intervention, Johnstone could have been a Manchester United star, just image him and George Best in the same team!

Jimmy Johnstone made his debut for Celtic reserves against St Johnstone on 7 October 1961. Jimmy scored one and made the other three. Watching the game was then Celtic manager Jimmy McGrory, who signed Johnstone immediately.  He was farmed out to a junior club, Blantyre Celtic for a year. However, Johnstone was so impressive that within weeks he was chosen to play for Junior Scotland against Junior Northern Ireland. Fate was on his side once again, when Jimmy Gribben (Celtic scout) watched the match and ensured that Johnstone was recalled to Paradise.

Despite being recalled to Celtic Park, Johnstone would have to wait two years for his first team debut. That eventually came at Rugby Park during a 6-0 loss Kilmarnock! Jimmy then had to wait another month before his next game, which was a 4-3 loss at Tynecastle, but he made his mark with a goal that saw him retain his place for the Scottish Cup tie with Rangers, a game in which he excelled, a week later.

The rest as they say is history, which every Celtic fan knows… both on and off the field with that crazy rowing boat incident!

Sadly, Jimmy was diagnosed with Motor Neuron Disease in 2002, which eventually took his life in 2006. He is immortalised in brass and stone at Celtic Park and is remembered in song with Lord of the Wing and Wee Jinky Was The Best. However, most prestigious of all is the famous Faberge Egg collection created for his benefit in 2005.  Indeed, Johnstone was honoured in a range of diamond-studded Faberge eggs created by descendants of the Russian Tsar’s court jewellers. Jinky joined Thomas Jefferson and Lord Nelson in a select group of people who have inspired the creation of one of the glittering and precious objects!

19 eggs were produced, priced at £10,000 each, with Jinky getting the proceeds of the sales. All of the eggs were snapped up. The Jimmy Johnstone eggs are made from silver, enamel, yellow and black gold and feature the medals of his major achievements: the European Cup, the Scottish League, the Scottish Cup and Scottish League Cup.

Another notable lasting tribute to Jinky was when he joined Celtic supporting band Simple Minds to sing Dirty Old Town.

Paying tribute to Jinky was a fantastic way to end a great Celtic day. We had seen early legends and then the greatest legend of all. Our next port of call was heading back to Inverclyde for some much needed food.