You are at:Home»Latest»Callum McGregor hails Odsonne Edouard ahead of League Cup final

Callum McGregor was full of praise when talking about Celtic teammate, Odsonne Edouard. The Frenchman is currently in a race against time to be fit for Sunday’s League Cup final against the Rangers.

Celtic fans cannot be blamed for being a little anxious heading into Sunday’s League Cup final. While the Hoops have been in brilliant form throughout the season, currently sitting at the top of the Premiership and guaranteed to top their Europa League group. But the injury curse has been hanging over the club for a long time, and it could have found a worse time to strike as Odsonne Edouard is a doubt for the big game against the Rangers.

Edouard’s ability to impact a game needs no introduction. He has scored 5 goals and assisted 2 in just 7 appearances against the Rangers. And has delivered the goods in multiple other big games for the Hoops as well. As a result, if he does end up missing the League Cup final, it will be a huge blow for Celtic. And a massive boost for Steven Gerrard’s side, who are looking to win their first major trophy. 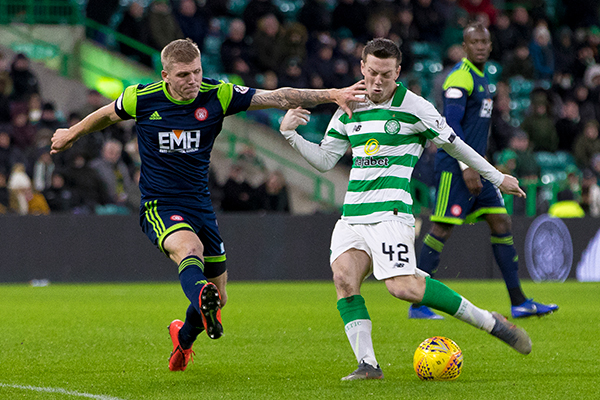 Speaking ahead of Sunday’s final, Callum McGregor emphasised on how important Edouard is to this Celtic team. The Hoops midfielder told the Daily Record:

“Obviously, we know how good Odsonne is. He’s scored in so many big games, Finals, European games – he is our main man.

“He’s our talisman and we wouldn’t swap him for anyone.

“Odsonne likes to come short and link. He can score from outside the box and do something overly-special. He just seems to have that knack of coming up with a special goal.”

At this point Hoops fans can only hope that the Frenchman is fit in time. With just a couple of days remaining, the issue is expected to go down to the wire with Lennon having to decide on the last day whether to play the talisman or not.

Previous ArticleRyan Jack claims that there is nothing to fear against Celtic
Next Article League Cup Final Tactics, Part 2 – The Midfield Battle, Ryan Christie Celtic’s Matchwinner