You are at:Home»Latest»Callum McGregor makes big decision in order to prove himself to Postecoglou

Callum McGregor has decided to cut his holiday short in order to impress new manager Ange Postecoglou. The Celtic midfielder is with the Scotland National Team as they host the Czech Republic in their European Championship opener at Hampden. The 28-year-old (it’s his birthday today) will likely be heavily involved in the three group matches and potentially beyond; however, he has told The Record that he only needs a short break of between seven and ten days off before returning to Celtic’s pre-season camp.

McGregor has played an enormous amount of football in the last five years, totalling an impressive 292. It is testament to McGregor as a person and as a footballer that he has been able to keep the consistency levels so high in this period; although, he has been accused of burnout in the last year due to setting himself such high standards. The player admits that he is feeling good and wants to impress Postecoglou while representing Scotland.

“I feel great. When you come away ahead of a big tournament, it only energises you. You feel fresher.

“The good thing about playing so many games is that you feel in a good rhythm.

“In terms of getting a rest, nothing is nailed on, but come the end of the tournament, I’ll get a week to 10 days and then I’ll be back in at Celtic. I’ve managed to play consecutively for five years and, touch wood, had no injuries or knock-on effects. 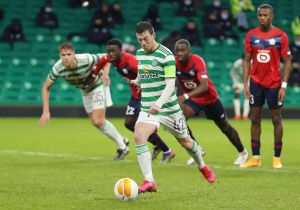 “So I feel good and I’ll be raring to go. I haven’t spoken to the new manager at Celtic yet but I’m sure he’ll be watching me in this tournament.

“It will be a fresh start when we go back and I have this chance to impress him from afar. For now, I’m just focusing on Scotland and I’ll deal with club stuff when I get back.”

Postecoglou will likely be able to call upon McGregor as his captain in the forthcoming campaign with CalMac set to replace his long-term colleague Scott Brown.  McGregor is one of the senior players but he found himself often having to carry his teammates through what was a diabolical season. Although, he is entirely right when he says that the new manager arriving is a fresh start for everyone at the club.