Cameron Carter-Vickers’ dad Howard has revealed that he shed tears at seeing his son make his World Cup debut. Howard Carter was a Basketball player himself, even playing in the NBA; however, he was more interested in recent weeks about the competition in Qatar given that his son, the Celtic defender was looking to make his debut.

Speaking to WAFB, Carter reflected on seeing his son play in the World Cup for the USA.

“He was around 16 when I realised he just might make it on the professional level. He got the most attention and most recognition from his peers by playing soccer, so that’s why he chose soccer.”

Carter-Vickers’ father then went on to say how the appearance for the USA resulted in him shedding a tear.

“It actually brought tears to my eyes. I told him to just be grateful that you got that opportunity.

“Some players never get that opportunity. Some guys go their whole career without having to play in the World Cup. We’re happy with what he’s done.” 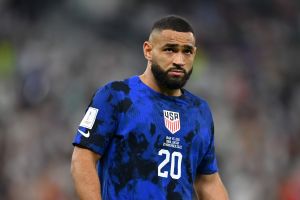 Cameron Carter-Vickers of United States looks on during the FIFA World Cup Qatar 2022 Group B match between IR Iran and USA at Al Thumama Stadium on November 29, 2022 in Doha, Qatar. (Photo by Dan Mullan/Getty Images)

Carter-Vickers only managed ninety minutes and was the only game the USA won. No surprises there given the strength he showed at the back to shut out Iran and progress to the Last 16. Unfortunately, he was dropped for Zimmerman as the USA crashed out to the Dutch. The result left many questioning the decision-making of the manager Gregg Berhalter.

The 24-year-old will take some time before returning to training with Celtic ahead of the return to action against Aberdeen on Saturday 17 December.