You are at:Home»Latest»Celtic 1-1 Dundee Utd – Well if it wasn’t for bad luck, we’d have no luck at all

In the build-up to today’s home draw with Dundee United it felt if it wasn’t for bad luck Celtic would have no luck at all and by the end of this 90 minutes those feelings were magnified, though with reflection perhaps our opponents could feel much the same way.

This was an entertaining game and one where Dundee United and their willingness to play an engaging style of football actually made for a spectacle, rather than the low block, hit on the counter approach many of the visitors to Celtic Park. That said their industrious approach to the tackle left a lot to be desired and there was little protection from referee Kevin Clancy today in that regard. 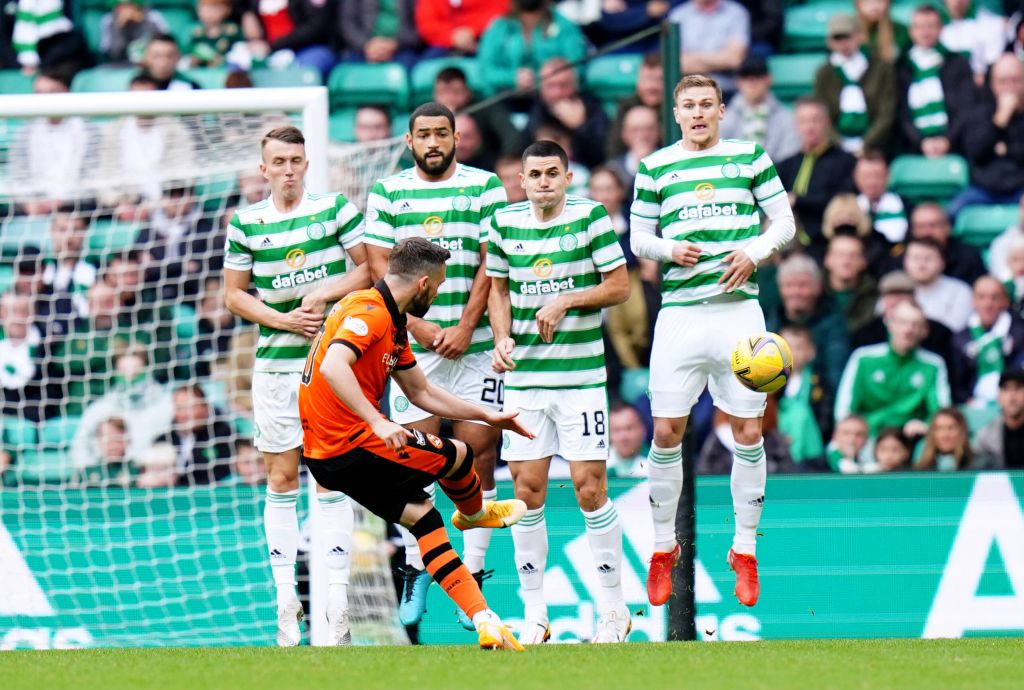 Celtic even prior to this match were down to the bare bones in many positions, and with Josip Juranavic being replaced injured early doors, it was hard not to feel a lot of sympathy for a manager trying to bed in a playing philosophy and constantly having to chop and change his starting line-up, as well as having limited options remaining on the bench with which to supplement those left standing, emphasised by the promotion from the B team of young Owen Moffat for a place on the bench.

Therefore, as James McCarthy, trying manfully to get into the physical shape required to start impacting on games, became the victim of a horrific tackle from United’s midfield enforcer Jeando Fuchs, one that shamefully only resulted in a booking rather than a merited straight red card, you kinda hoped someone would pass Ange a wee dram just to take the edge off when McCarthy couldn’t continue after the break. 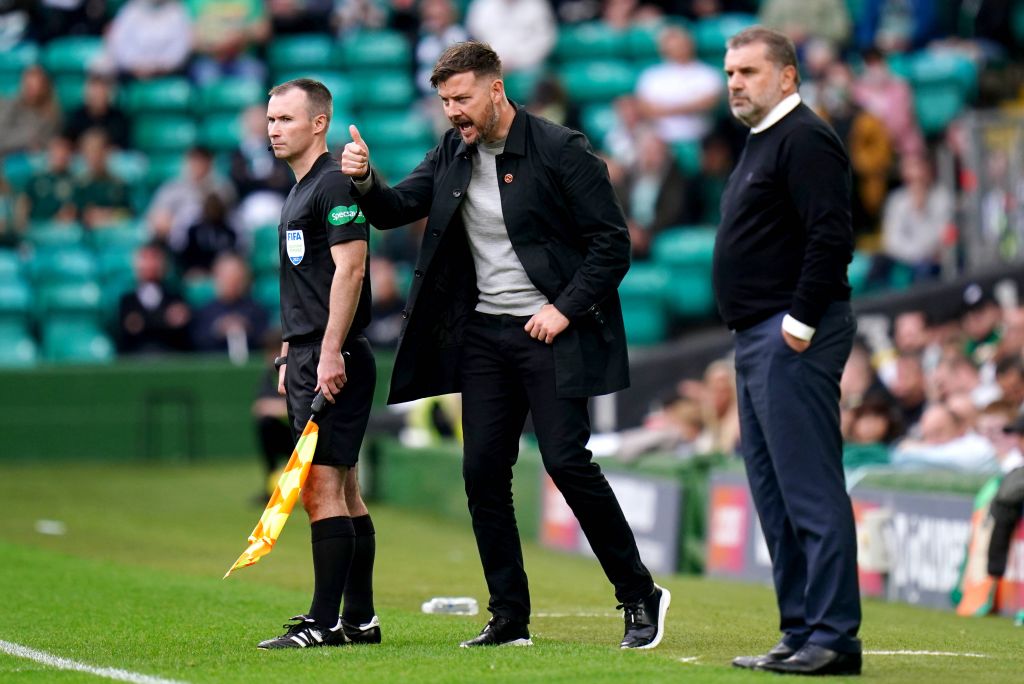 The refereeing debate wasn’t stopping there either. Not only did Fuchs stay on the pitch he greatly influenced Dundee United’s performance. As did United ‘keeper Benjamin Seigrist, a very capable goalkeeper but one who managed to avoid any punishment despite clearly and deliberately kicking out at Liel Abada at the edge of the box with a reckless challenge that not only left Celtic’s wide player lying in a heap on the deck but also hindered his movement and impact for the rest of the game. It was also one clearly still causing the player discomfort after the final whistle. It may well be Ange’s injury concerns aren’t quite completed for the evening just yet.

Yet United fans locked out of Celtic Park and watching on a pay-per-view stream would hold their own frustrations at Mr Clancy today, as the whistler missed a clear penalty kick when Cameron Carter-Vickers, attempting to atone for the loss of possession at the edge of the box of his central defensive partner Carl Starfelt, clearly barged Nicky Clark off the ball. It was blatant and perhaps made both sets of fans consider if Clancy was biased or simply inept. 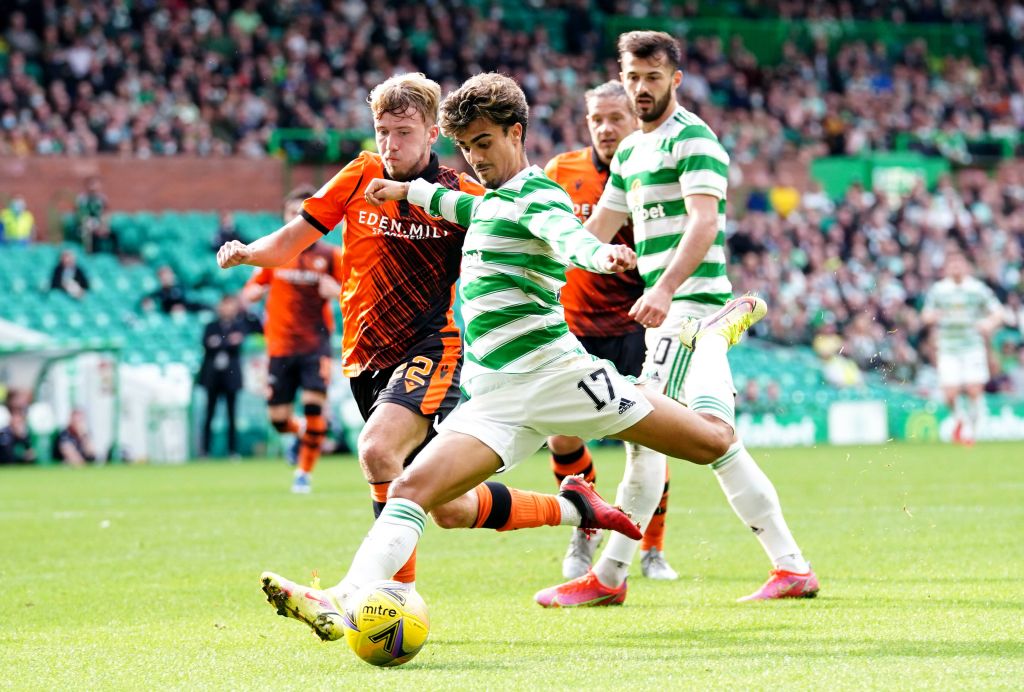 All that said, injuries and missed red cards aside, Celtic still managed to keep a strong rhythm to their play and create a multitude of chances. On four occasionsthe woodwork was rattled, once by Turnbull, twice by Jota and also by a Tom Rogic header all coming after Liel Abada’s fine opening goal with a superb back post header direct from both the graft and then craft of a superb right foot cross from Jota, the best player on the park today.

Add to that Albian Ajeti inexplicably, and somewhat against the laws of physics, managed to put the ball over the bar from two yards out when it was far easier to score. There were also a multitude of missed opportunities as Celtic, much improved in and around the box that last weekend’s visit to the Tony Macaroni, fizzed balls across the six-yard box only to find there was a frustrating lack of awareness from the likes of Ajeti and Abada to read the opportunities arising, and the slaloming Tom Rogic came close to scoring only to find every angle he tried to find was closed down by the United defence.

It will be hard for any Celtic fan not to feel frustration with two more points dropped and even more so as it slips Celtic further behind in the title race and six points behind theRangers in particular, but there were a great deal of positives to take from today and if lady luck had winked in our direction this afternoon this was a game Celtic could have one by more than a couple.

The players themselves never gave up and fought for the winning goal right to the end, and although there were moments of sloppiness and indecision at times, much of that can be put down to the constant chopping and changing of this side as the injury list fairly mounts up, but also to an opposition who were well organised, broke up play well and caused Joe Hart a few moments where he too had to earn his keep. 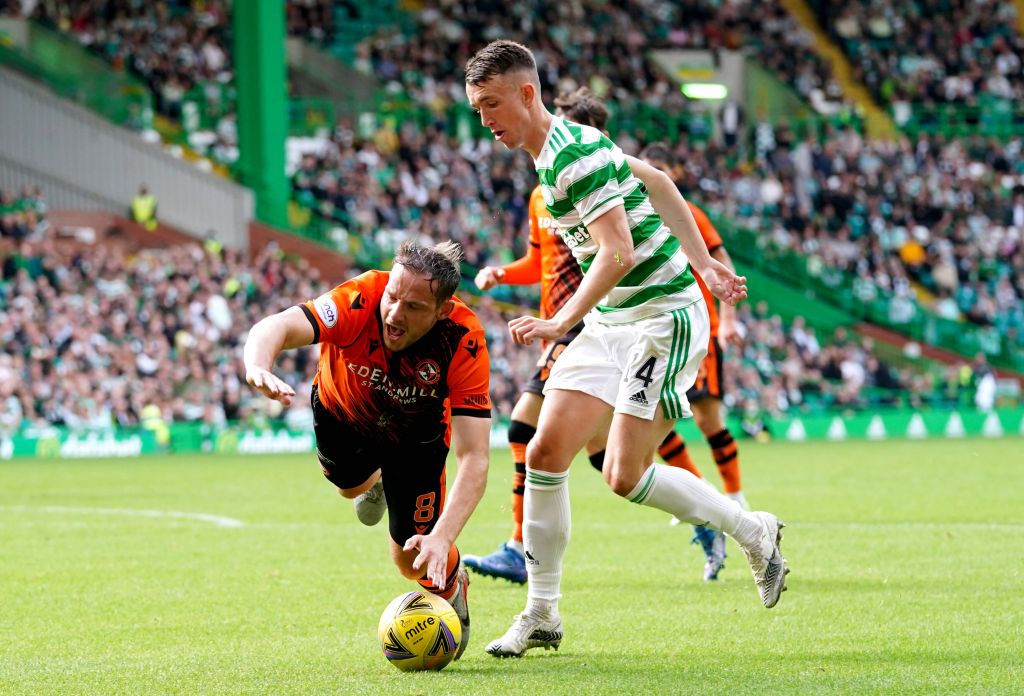 This was a massive improvement on last weekend’s visit to Livingston but infuriatingly it resulted in only a single point where three would have been well deserved. Yet it’s fair to say Dundee United fans will be dreaming tonight of that penalty decision ignored, while we’ll all be having the same recurring nightmare of Albian Ajeti orbiting a football while almost standing on the goal line. It was a moment that summed up Celtic’s luck both today and in recent weeks.

As for Ange he’ll simply wonder if he has eleven suitable players left for the visit of Bayer Leverkusen such is the worrying extent of Celtic’s injury list and his post-match admission there was little chance of any returning in time for Thursday night. Perhaps the fans of both sides won’t be the only ones struggling to nod off tonight.

Previous ArticleCeltic 1-1 Dundee United: Match Report
Next Article Celtic Shared call on Support to hold the Board to account