You are at:Home»Latest»Celtic 1 Copenhagen 3 – Self inflicted wounds and lady luck looking in the opposite direction

Ultimately this was a hard one to take. Not because we were out played but because the 3-1 defeat was predominately self-inflicted. Individual errors in defence ultimately cost Celtic dear.

It looked so promising in the first half. Although somewhat too adventurous considering all we needed to progress was to keep a clean sheet, we clearly felt a goal would make us more comfortable and perhaps take the sting out of Copenhagen’s game plan.

Much like in the Parken Stadium last week we had enough chances to kill the tie off in the first half but for a mixture of good goalkeeping from the excellent Karl-Johan Johnsson and bad luck we may well have had the tie finished by the interval.

Hesitancy from James Forrest coming into the back post to meet an Elyounoussi cross was out of character. On most occasions Forrest would have gambled that the covering defender would miss the ball and be ready for a tap in, on this occasion he didn’t and Jamesy was caught on his heels as the chance passed us by.

Moi who was superb in the early exchanges and Celtic’s biggest threat mugged Copenhagen as they attacked and ended the move with the clearest opportunity but somehow put too much on his shot and it went over. The look of distress on his face said it all about that chance. It was a big one. To not even hit the target beggared belief.

At this point Celtic were looking comfortable we were really exhibiting signs of getting into our stride. We had a third clear chance through Rogic though I’m not sure he knew an awful lot about it as the ball hit off him and looked net bound but instead hit the post as lady luck was beginning to look like she may not favour Celtic.

It didn’t discourage Celtic though as Edouard was unlucky as his shot was deflected wide for a corner when clearly heading goalward. Then right on half time the best chance of the half when from a superb Rogic cross Eddy met the ball well and his downward header was textbook but again luck deserted us as it went straight at Johnsson when anywhere either side would have resulted in a goal.

As we reached half time my only concern was the profligacy in front of goal. Bar the odd counter we appeared to be dealing well with Copenhagen’s threat and bar a niggling doubt you always have when you fail to take chances, I was fairly certain we’d score if we stuck to the plan. How wrong that assumption proved to be.

Out of character and out of nowhere came the keystone cops defending of the second half. The self-inflicted pain came via Simunovic who looked uncomfortable from the moment Kauffman skinned him early in the first half. 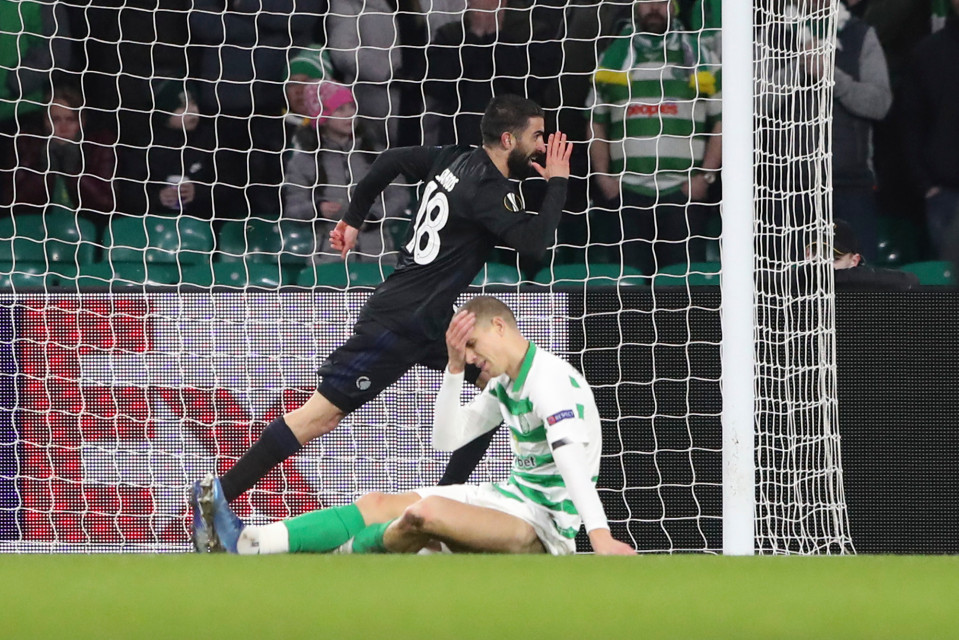 Jozo failed to deal with the most routine of passes, he could and should have put the ball out of play when he realised he wasn’t set, instead he tried to keep possession and it backfired spectacularly. From a short back pass Copenhagen substitute Santos pounced and headed for goal. Christopher Jullien then fell over trying to block Santos cross and once again lady luck batted eyelashes at Copenhagen as the ball fell kindly back into the path of Santos who simply had to lift the ball over Forster for 1-0. Poor decision making coupled with a hefty dose of ill fortune for Celtic.

Then came the change when needing a goal Neil Lennon sent for Leigh Griffiths. It nearly paid off and 9 times out of 10, when that lady with the luck favours you it would have. Griffiths had a glorious chance from six yards out but the reaction save from Johnson lying on the floor was undeniably brilliant. At that point you start to think this isn’t our night.

Then came the hope that tends to kill you. A Sigurdsson handball. A VAR assisted penalty and the most wonderful impudent penalty from the coolest man inside Parkhead as French Eddy levelled things. Eddy didn’t celebrate much, he tapped his head to tell his teammates to think, stay focused no more mistakes. Sadly we didn’t pay heed to the message. The self-inflicted pain being administered by lady luck struck again and then again.

Jullien and Rogic both lost their bearings as the atmosphere heated up and the lost concentration led to a counter attack that left Biel one on one with Forster. You always have hope when The Wall is facing a forward but Biel was very composed indeed and put away the chance very well indeed. That was the tie over there and then but with both Jullien and Simunovic having had a mistake Ajer finished the set with a poor clearance and N’Doye administered the final blow to our European hopes for another season.

As Lennon said post-match he has no intention of throwing his players under the bus. Individual errors have been rare of late and even when they have reared their heads they haven’t cost us. Last night they did. However tiredness set in in the middle of the park. We stopped winning second balls and the limbs of Moi, Rogic and Brown started to show they weren’t quite up to 90 minutes at that level of competition.

When we bypassed midfield and went forward the ball was not sticking up front and the pressure was coming straight back through a weary midfield and on to defence where confidence was lacking.

Perhaps like the first half we should have utilised the wide areas and used the channels to get behind them. I’m not certain after conceding the first goal we had to change the shape. Taking Ajer back into central defence and putting Frimpong on may have given us the threat we needed. It may have been worth trying at least.

Scott Brown was evidently off the pace and had played because we needed him. No-one was concerned to see his name on the team sheet, we were simply glad to have him but with the benefit of hindsight he wasn’t quite fit enough. Moi was a gamble but it didn’t backfire as much of what we achieved as an attacking threat came through him in the first half, we just didn’t capitalise on the first half supremacy we had.

Tom Rogic also lacked match fitness but with Ntcham injured and Christie suspended we needed creativity in the middle of the park and Rogic was influential in the first half also. Had we put the game to bed in that first half we could have sacrificed the players lacking in match sharpness, we didn’t and we had to plod on.

The Copenhagen opener forced us into a tactical change as we then had to open the game. What we didn’t count on after that was how spooked the defence had become at the loss of such a sloppy opening goal. It really seemed to impact on them.

It was certainly a disappointing end to a tie that we had enough chances to win both legs comfortably and at that level you tend to get punished when you squander opportunities. It didn’t help lady luck deserted but in the end it was self-inflicted wounds that ended our European campaign.

What we can’t do is wallow in the aftermath. We have a massive Scottish Cup tie at the weekend and a league title to get wrapped up. We can only look forward. Neil Lennon and his team have bounced back from setbacks, none more so than defeat at home to ‘the’ Rangers. If they can deal with that and respond as they did so well until last night, then they can again.

Neil Lennon wasn’t for throwing his players under the bus and nor should we. This team has more than earned some leeway.

Watch the ‘highlights’ from BT Sport below…