You are at:Home»Latest»Celtic 1 Rangers 0 – ‘We were out in the rain while they had a roof – that seemed wrong’

EARLIER today we looked back to the 1977 Scottish Cup Final which Celtic won 1-0 thanks to a controversial penalty which was converted by Andy Lynch to secure the double for Celtic. It would be the last Celtic honour for both captain Kenny Dalglish and manager Jock Stein.

You can read our feature from this morning below, then there are some of your memories of the Cup Final win on this day in 1977 below…

I suppose I could have gone. It was common knowledge that tickets for all parts of the ground were available, but the weather was cold and wet, traffic jams around Hampden were awful (far worse than now), the stadium itself was really dreadful (and also far worse than now), the game was on TV, and of course live football on TV was a novelty, and I was curious to see how BBC would do it. 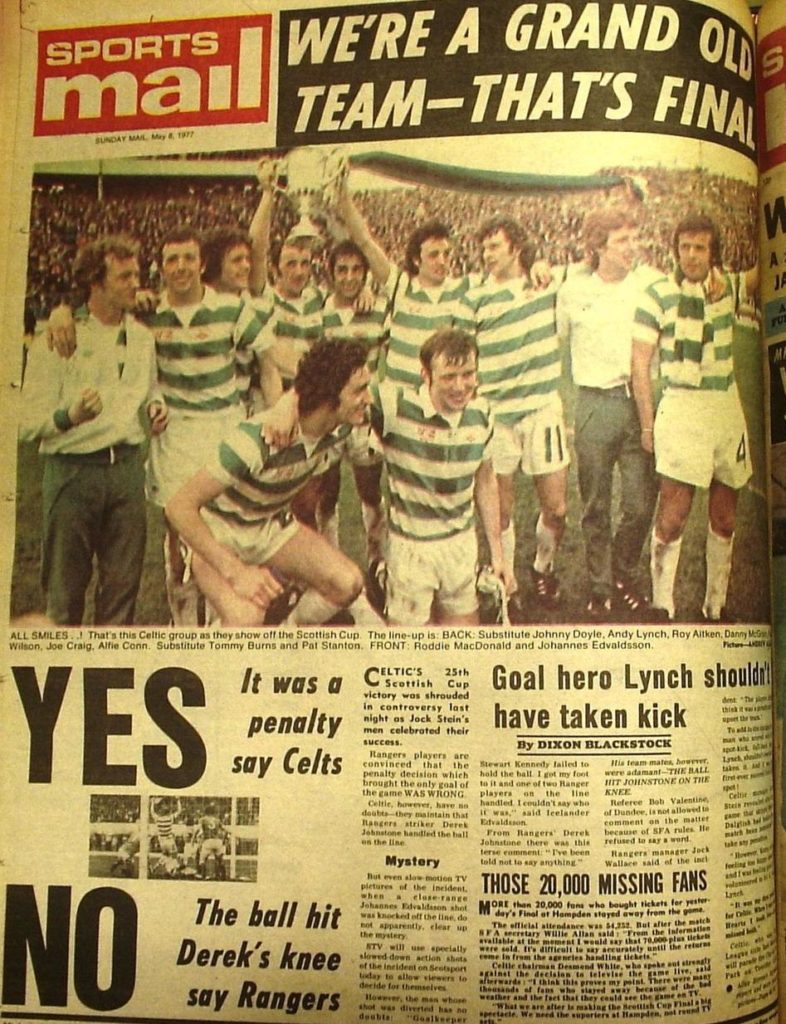 The game was not great. Dalglish was not at his best and he was the only one that you could say was anything like a class player. Aitken was OK, Conn had a good game, but after that you would have to say that the only good players were the goalkeepers!

Rangers were a very poor side that year, and they were demoralised after Willie Waddell had said that the club would sign Roman Catholics!

The penalty? Not proven, as they say in the High Court, but it usually depends on who you support! But Mr Valentine was the only man that really mattered and he gave a penalty. It was well taken by Andy Lynch, who about three weeks earlier had managed to score two own goals in one game!

The League was well won and Big Jock made sure that everyone saw “League Champions” on the tracksuit tops. 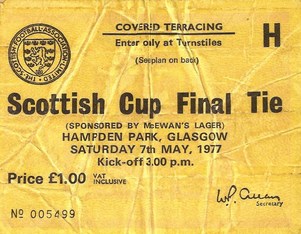 I watched the game on tv with several family members including my late father-in-law, a Moville man, who with around 5 minutes to go stated (unwisely!) that it would make it an interesting final few minutes if Rangers could get an equaliser….we offered him a choice of upstairs windows to leave by!

A most enjoyable blog, HH,

I remember watching this on tv at home in Belfast. I was 11 years old. I used a subbuteo pitch as a green flag to wave after Andy scored that penalty. Happy days. 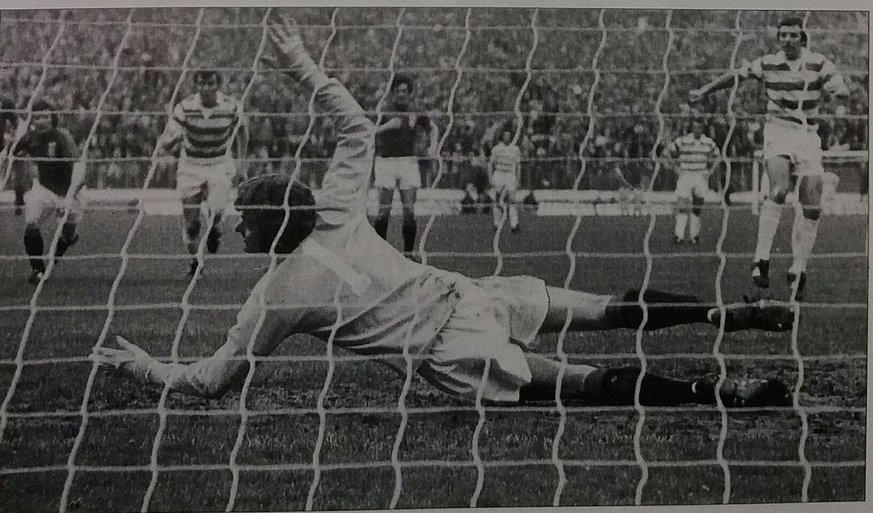 I was there, it was my first Celtic v Rangers game without my dad. I went with some school friends from Linlithgow on a mini bus. It poured all day and I remember there being gaps on the terracing. We were behind the goals out in the rain while they had a roof over their end. That seemed wrong. Later back at school I wrote an essay in my English class about the build up to the final and the tension before the game and got 22 out of 25 for it. My best ever result in an English essay. What a great day. 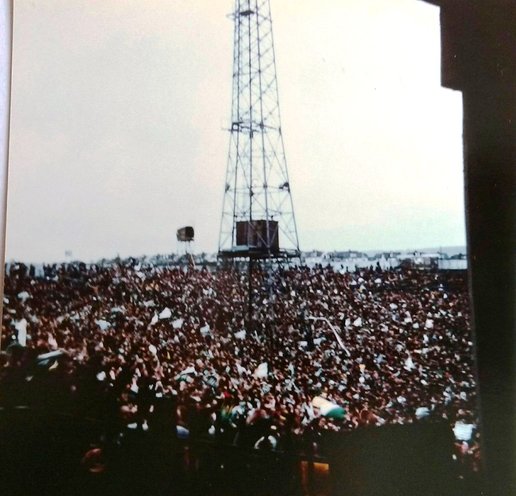 Remember it well was at Mearns Kirk Hospital visiting my wee brother, watched it in the day room. The nurses kept telling us to keep the noise down! 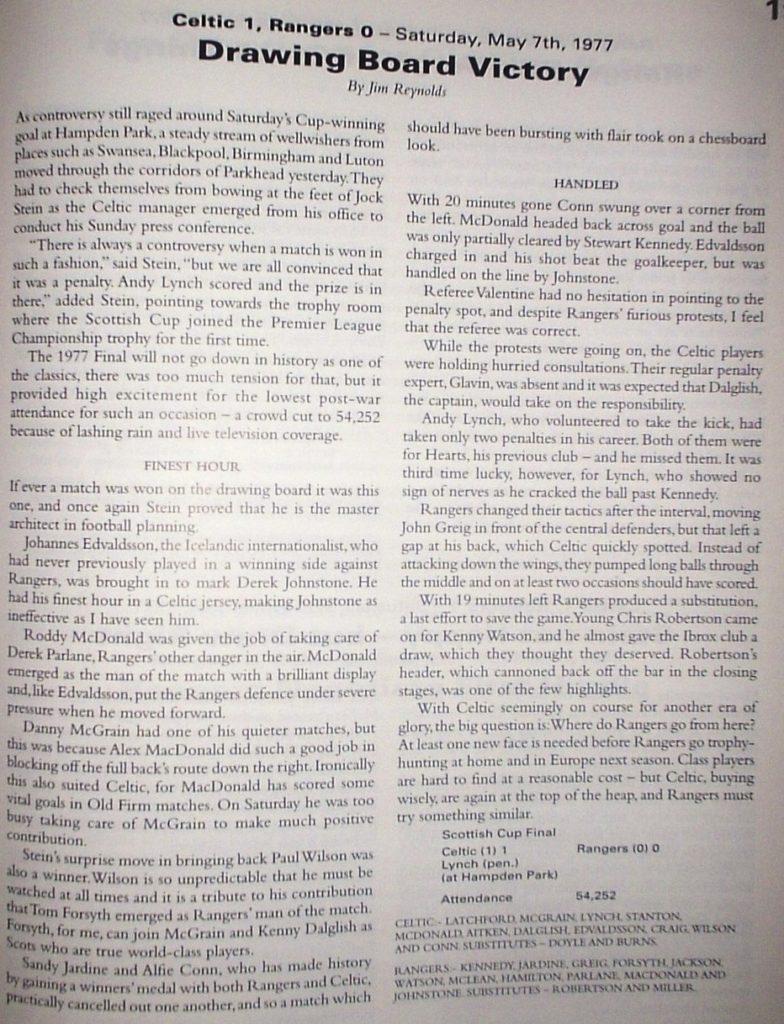