“Absolutely delighted that we could give our amazing fans, who came despite the weather conditions, something to cheer about!,” Celtic manager Fran Alonso said after Celtic’s dramatic, fantastic 2-1 win over the SWPL’s 13-in-a-row Champions in terrible weather conditions on Friday evening.

“Very proud of the Ghirls who didn’t settle for the point and showed the ambition to go for the win against the champions,” he stated.

Absolutely delighted that we could give our amazing fans, who came despite the weather conditions, something to cheer about!
Very proud of the Ghirls 🍀 who didn’t settle for the point and showed the ambition to go for the win against the champions.

It was the start of a new era of professional football for Celtic’s women’s team tonight as Fran Alonso’s side faced up to League and Cup holders Glasgow City under the management of former Aberdeen and Scotland player Scott Booth.

Glasgow City went into the game as heavy favourites with 13 titles in-a-row already bagged. It was going to be a massive ask for the Celts to compete.

Though names on the Celtic team sheet like Summer Green and Sarah Teegarden may evoke images of a San Francisco summer of love, a night of windy conditions and driving rain was more end of days than Woodstock.

Here’s how Celtic lined up… 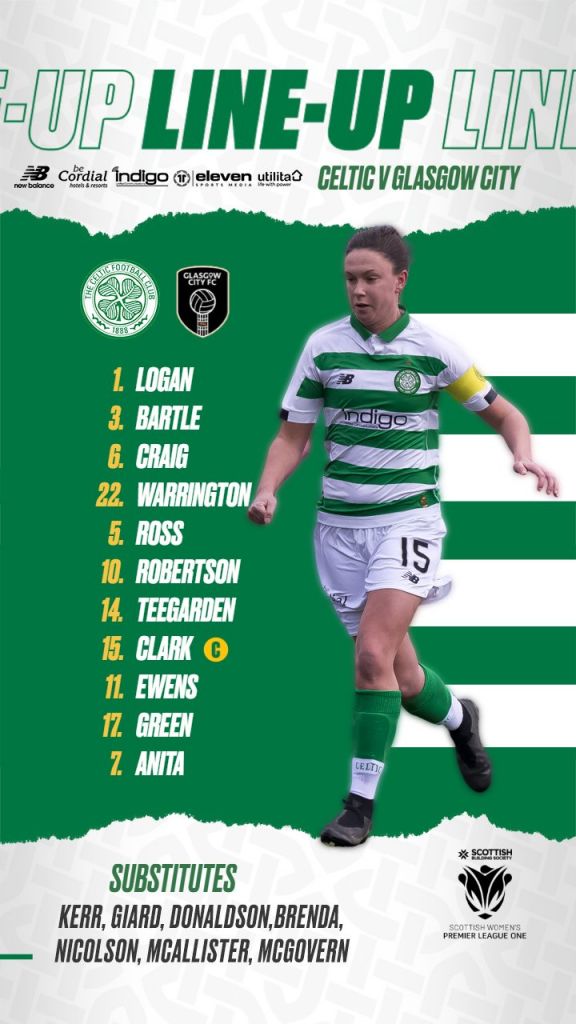 It was tough conditions to play football and credit must go to both sides in the opening half for getting the ball down and playing. Celtic looked comfortable and happy to play the ball out from the back, try and play a high line and press Glasgow City whenever possible.

The best chances of the half fell to the Hoops. As early as the 7th minute new signing from Atletico Madrid Anita, struck the post after a good break and cross from Lisa Robertson down Celtic’s left wing.

Only 30 seconds later Robertson also drove a fine shot but City keeper did well to be equal to it.

Anita’s movement and positioning was starting to show for Celtic but Glasgow City had a great break through on goal in the 10th minute but it was thwarted by a fantastic saving tackle from Chloe Craig.

For Glasgow City the real star was on their left hand side and Hayley Lauder was stretching Celtic at every opportunity but the Hoops were managing just about to keep the efforts on goal to a minimum.

It didn’t help Lauder’s teammates struggled to have any accuracy when chances were created but it was clear the danger player for City was Lauder. Logan in the Celtic goal was dealing comfortably with anything coming into the box

For Celtic Sarah Evans was direct and dangerous and the Celtic wide player cut in from the left but her right footed shot was well saved.

Glasgow City had a good chance when a free kick conceded by Celtic’s Craig was delivered well but City’s Crighton lacked the bravery required to get on the end of it. The City star will look back on it as a chance missed.

With 26 minutes gone Celtic looked like they had scored when Sarah Teegarden hit a shot from 20 yards after another fine break down the left from Sarah Ewens.

That stung City back into action, with Lauder again causing problems. The left winger curled a lovely effort but Logan got down well to save and the Celtic defence cleared well.

With 33 minutes gone Summer Green shot from a tight angle that sting the palms of the keeper as Celtic wrestled back the initiative.

There was little else of note as the half ended but Celtic were the better side. They carried more threat, found space well and the pressing game was causing City problems. Celtic looked calm in possession and looked a very athletic side. Teegarden, Green and Sarah Ewens were the standout performers and Anita certainly looked like she had a touch of genuine class and creativity up front

The second half started in controversial fashion when Celtic went behind. A City corner kick should have been cleared at the front post and Claire Shine pounced at the back post to tap in from what looked a suspiciously offside position.

48 GOOOOOOALLLL CELTIC! THAT’S HOW YOU RESPOND! @sarahewens19 with a sensational effort from out wide! All square again in East Kilbride! Celtic 1-1- Glasgow City pic.twitter.com/Q2gngzyycN

Within three minutes however Celtic were back level and it was a simply top class execution from Sarah Ewens, Cutting in from the left hand side Ewens hit an unstoppable right footed dipping and swerving shot from the angle of the 18 yard box that went high into the net. It was a stunning an immediate response from Celtic.

Celtic had further chances in the second half when Anita worked herself an opening at the edge of the Glasgow City box and although she did well to get a shot off the effort was well saved.

Summer Green also had a left foot effort dip just over the bar and substitute Josephine Giard on for a tiring Anita managed to get the ball into the net but the effort was chalked off correctly for a Teegarden foul on the keeper.

Glasgow City then had a chance to win the tie when a cleverly worked short free kick from Leanne Ross found Lauder at the front post and her snap header went just wide. It was a real opportunity and one City would soon regret.

In the 92nd minute Sarah Ewens by now the undoubted player of the match, had a shot blocked that looked goal bound. As the corner was awarded there were no more than ten seconds left on the clock. From the resultant corner it looked like a defensive header from City had run down the clock but as the ball broke to the edge of the area Celtic captain who had been calm and composed throughout at the other end found herself with time to cushion the dropping ball and strike the ball low and goalward. The ball beat everyone and found the bottom of the net. There was only time for Glasgow City to restart the game and the referee blew for full time.

Anybody know the Gaelic for scenes?😍😍😍 https://t.co/mdkn3DpnyU

Celtic and deservedly so defeated 13 in a row legends of Scottish women’s football and last season’s league and cup double winners Glasgow City by two goals to one.

This is a result that will put Scottish football on notice. It was not just a win for Celtic tonight it was a statement of intent.

Wow! Great stuff from the ghirls. What a victory 🍀 #COYGIG https://t.co/aldqTSlhoh

It was Celtic 2 Glasgow City 1 and a wonderful start to professional football for Celtic FC Women’s football. As Billy McNeil was quoted as saying:

Captain Kelly Clark, herself a fine Celtic defender and this team may just have extended that fairy tale to the Celtic women’s team tonight.