You are at:Home»Latest»Celtic 2 Rangers 1 – A Yogi double then pitch invasion as Rangers fans assault Ian Young and Neil Mochan 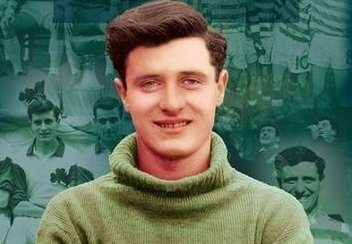 Having started all three of those matches, Charlie Gallagher would be replaced by John Divers for the midweek home fixture with Motherwell, a selection decision which would prove highly significant both then and in the future. Divers would beat a youthful Peter McCloy to score the only goal of that game with 20 minutes remaining, as the inaugural home game of Stein’s first full season in charge saw the Celts wear all-white socks rather than the traditional hooped hosiery. Another piece in the evolving Lisbon jigsaw was thus complete – the strip.

Divers would retain his place at the weekend as Dundee ruined Joe McBride’s competitive Celtic debut by taking the two League Cup points back up to Tayside following a 2-0 victory at Parkhead, Stein’s men now three points behind section leaders Dundee United at the halfway stage. A second visit to Tannadice followed three nights later, Wednesday, 25 August 1965, this time on League business. Celtic supporters in the crowd that day could scarcely have believed at that point that this match would mark the beginning of a record nine successive Scottish League championship wins. Charlie would regain his first team spot at the expense of Bertie Auld, as Jock named the following line-up for what would be an historic occasion.

Celts would avenge their recent League Cup defeat at the same venue with a comprehensive 4-0 victory, John Divers opening the scoring within 15 minutes from a Joe McBride pass to record what would be the first goal of THE nine-in-a-row. McBride himself, an Ian Young penalty and a Tommy Gemmell rocket would complete the rout. Despite that result, the return of John Hughes from suspension would see Charlie Gallagher drop out of the team as Celts beat United in the return League Cup match at Parkhead three days later, this time 3-0. He would return as Stein shuffled his pack to address an injury to Joe McBride for the visit to Fir Park, Celts going top of the group following a 3-2 win, then immediately make way as the striker was deemed fit enough to start at Dens Park. A 3-1 victory over Dundee on Saturday, 4 September 1965, with John Hughes scoring a sublime goal, would be enough to push the Hoops into the quarter-final, a scenario which had looked highly unlikely following Celtic’s two defeats in their opening three League Cup fixtures. 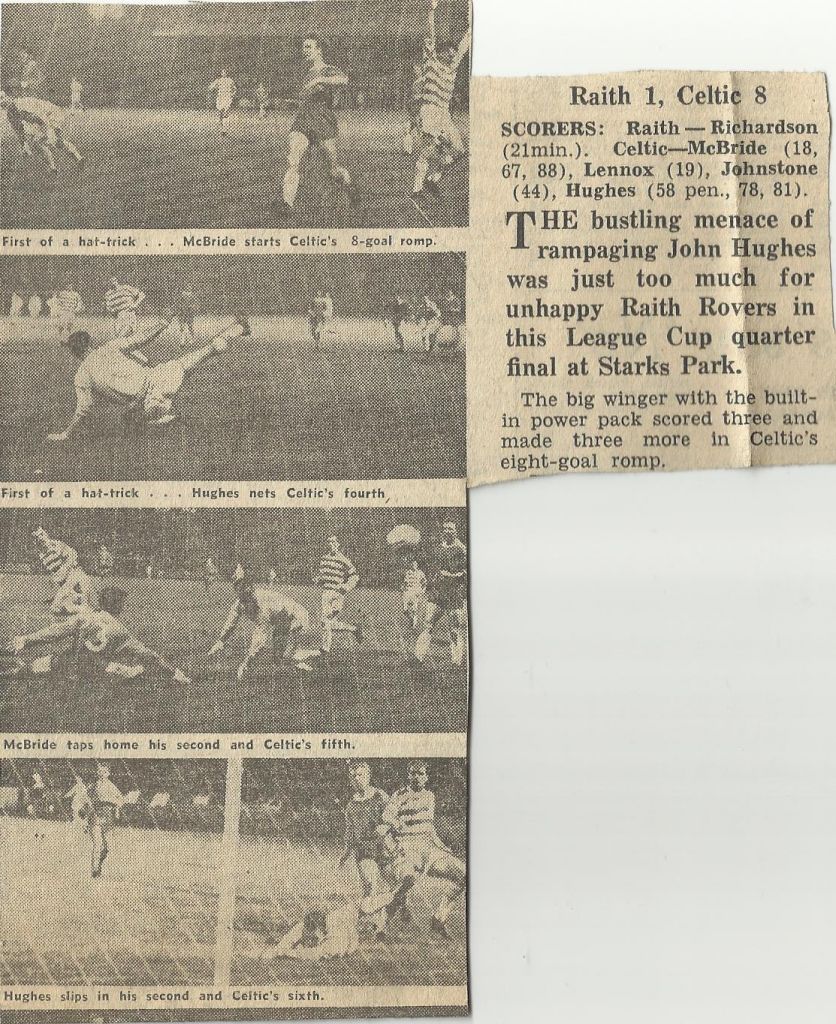 Stein’s men were paired with Raith Rovers in the last eight, the Celtic boss re-introducing Jimmy Johnstone and Charlie Gallagher to the right side of his attack. And eight was the magic number, as both John Hughes and Joe McBride scored hat-tricks at Starks Park against a home defence which included former Celtic legend Bobby Evans and Ian Porterfield, who would score the winning goal for Sunderland in their shock FA Cup Final victory over Leeds United in May 1973, before managing both Aberdeen and Chelsea. Sadly, Charlie would pick up an injury in the 8-1 win in Kirkcaldy which would force him out of the weekend defeat at Ibrox. 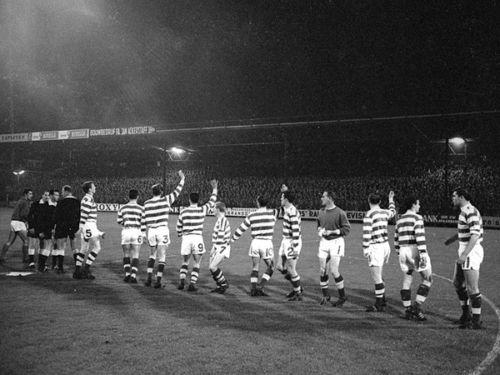 He would return for another historic match, as Jock Stein took his Celtic team to the Dutch town of Deventer for his first European tie in charge of the club. Bobby Lennox would mark that occasion with a hat-trick in a 6-0 win over the local Go Ahead Eagles in the first round of the Cup Winners’ Cup.

There would then be two games the following midweek after a blank international Saturday. On Monday, 4 October 1965, a last-gasp Lennox equaliser kept Celtic in the League Cup, Hibernian having led 2-1 in the semi-final at Ibrox. The Edinburgh club was now managed by Bill Shankly’s brother, Bob, who had achieved notable success with Dundee, where he won their only Scottish League title in 1962, before leading them to the semi-final of the European Cup the following season, the Dark Blues losing to eventual champions AC Milan.

Shankly then succeeded Jock Stein at Hibernian, when the Big Man left for Celtic in March 1965, and the two would become firm friends, holidaying together then injured in the horrific car crash ten years later which was so nearly fatal. Bob passed away in 1982 – suffering a heart attack at an SFA meeting no less – and the ‘away end’ stand at Dens Park has since been named in his honour. Sadly, his great friend, Jock, would follow him just three years later, after the tragic events in the Scotland dugout at Cardiff’s Ninian Park.

On Thursday, 7 October 1965, Jim Craig replaced Ian Young at right-back for the return leg with Go Ahead, Joe McBride scoring the only goal early on as Celts cruised through on a 7-0 aggregate against the Dutch amateurs. A look at Stein’s line-up that evening is very telling, with no fewer than nine Lisbon starters in that team just seven months after the manager’s arrival, only the yet-to-be-signed Willie Wallace and the out-of-favour Bertie Auld missing out.

Wallace would actually be in the Hearts team which visited Parkhead just two days later, Charlie Gallagher returning from injury to score his first competitive goal of the season, a superb strike to put the Bhoys 5-0 up with 20 minutes remaining, before a late Alan Gordon double took some of the shine off of my first-ever senior game as a Celtic supporter. Joe McBride and Bobby Lennox had earlier notched their own braces in a comfortable victory. 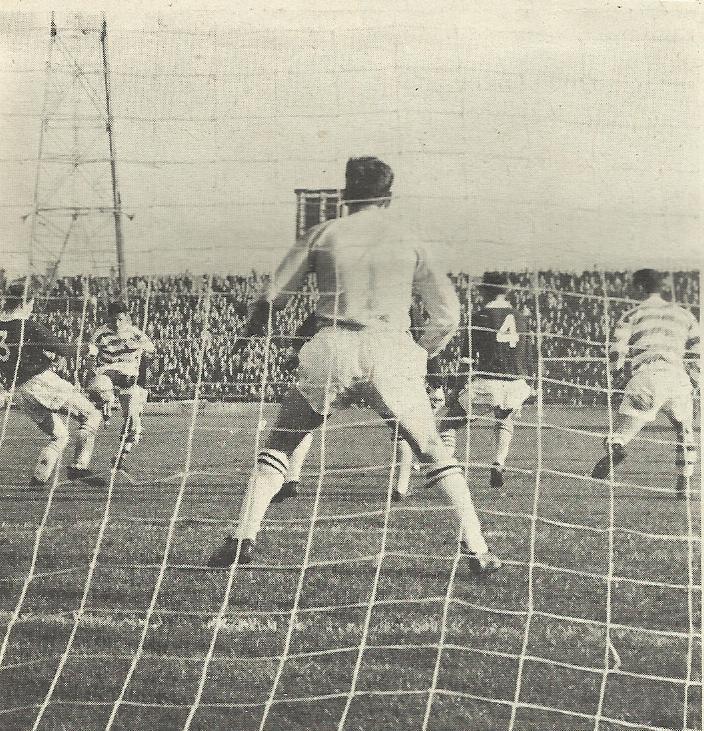 The replay with Hibernian would take place at Ibrox on Monday, 18 October 1965, just two days after Celtic had three times come back from being a goal down to win 4-3 against Falkirk at Brockville. There would be another four goals that evening, this time with no reply from the Edinburgh men, who possibly sensed that their chance had gone in the dying seconds of the first match. That set up a League Cup final against Rangers at Hampden just five days later, a repeat of the previous season’s finale in that competition.

Twelve months earlier, Charlie Gallagher had suffered heartbreak, falling just short of the match-fitness required to make the Hampden line-up. He had perhaps done more than most to get Celtic there, having played in every game on the competition and contributing six goals to boot. Sadly, the injury sustained against the hammer-throwers of Leixoes would see him miss out on that occasion, however, his recent good form would see him take his place in the team for this season’s final, Celts seeking revenge for that defeat and the recent League loss at Ibrox.

Jock Stein chose the following 11 men on Saturday, 23 October 1965, for the first of what would be 13 successive League Cup finals for him as Celtic manager. An incredible record.

A record League Cup attendance of just under 108,000 saw Celts set the tone from the outset, Ian Young clattering into Willie Johnston to send a message that the Hoops would no longer be bullied under Stein, as they had been so many times in recent years in these fixtures.

That scourge of Celtic, Jim Forrest, had already passed up two glorious chances before the Hoops broke the deadlock in the 18th minute. John Clark took a quick free-kick by clipping the ball to the angle of the box, where Rangers centre-half Ronnie McKinnon jumped to meet it before inexplicably handling. A stonewall penalty kick. Despite the antics of Billy Ritchie on the line, John Hughes coolly stepped up to send the keeper the wrong way in front of the massed ranks in the cast Kings Park terracing. Within 10 minutes, the lead was doubled, thanks to the genius of Jimmy Johnstone. The little winger turned Ibrox full-back Davie Provan inside out on the right touchline, before accelerating past him to head towards the byeline. A desperate lunge from Provan would bring Jinky crashing to the ground, referee Hugh Phillips, the man in the middle when Celts had won the Scottish Cup six months earlier, immediately pointing to the spot again. This time Yogi went for the opposite corner, Ritchie getting a touch to his shot but the roar of the crowd telling him that it was 2-0.

With six minutes to play, there was a lifeline for Rangers following a controversial goal. The only contact made by John Greig as he chased Willie Henderson’s free-kick appeared to be an illegal one on Ronnie Simpson, however, the ball ended up in the Celtic net via the face of Ian Young, meaning a tense closing period for the Hoops support. Finally, the whistle blew signalling a first League Cup triumph for Celtic since Hampden in the Sun, eight years earlier.

As the players celebrated on the Hampden pitch after receiving their medals, we saw the ugly face of football rear its head, as hundreds of Rangers supporters made their way from the terracing towards the players, some reaching the triumphant group to attack the players and backroom staff, with Ian Young and Neil Mochan amongst those assaulted. 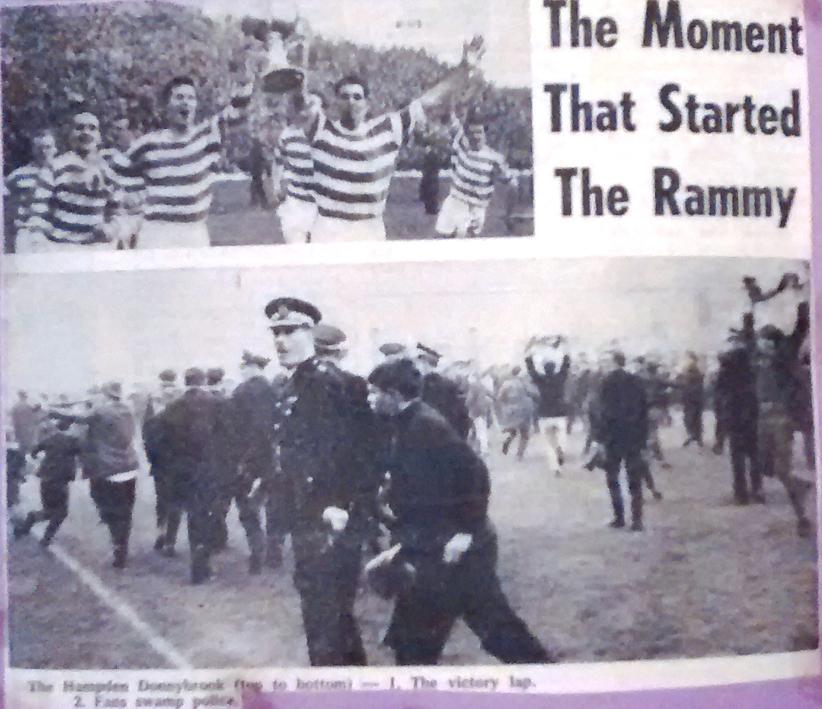 Other Celts rushed to their aid before the police eventually restored order. These scenes would have major implications, with the traditional laps of honour subsequently banned at Hampden for more than a decade, a decade of Celtic dominance as it transpired. Sadly, we would see them again in the Scottish Cup finals of 1969, 1980 and 2016. I’ll leave you to draw your own conclusions. 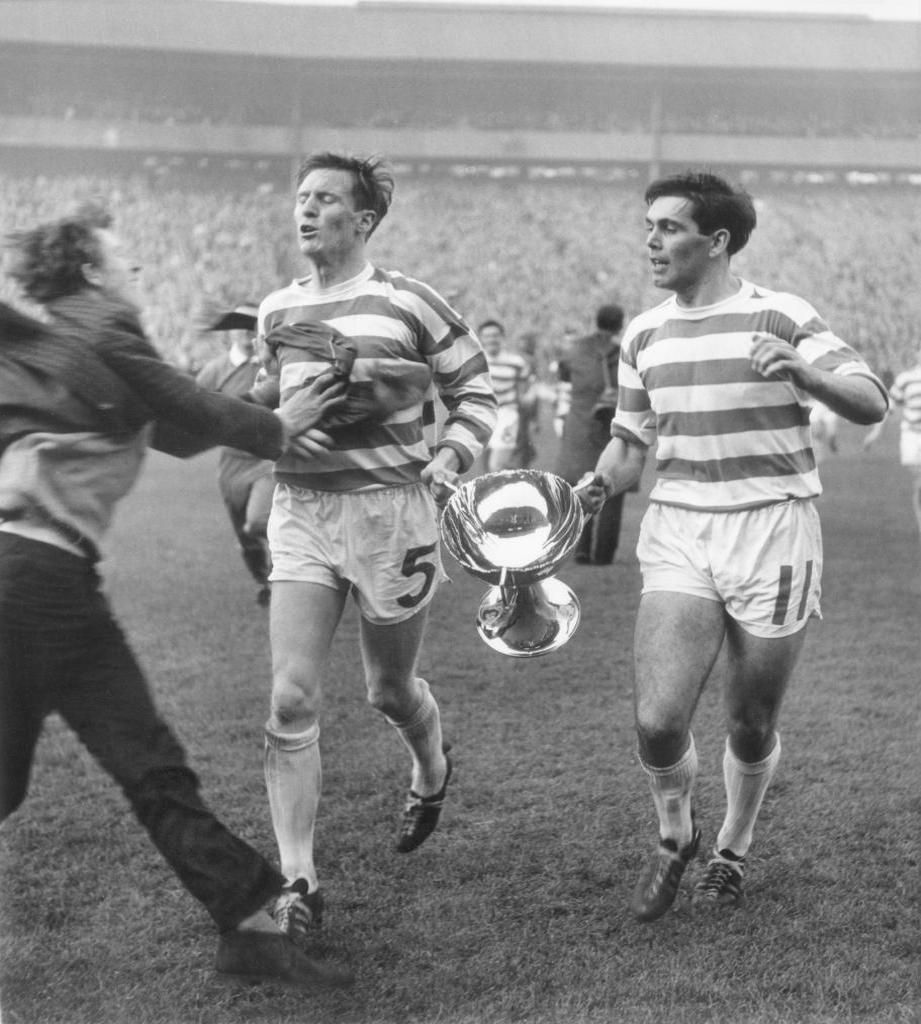 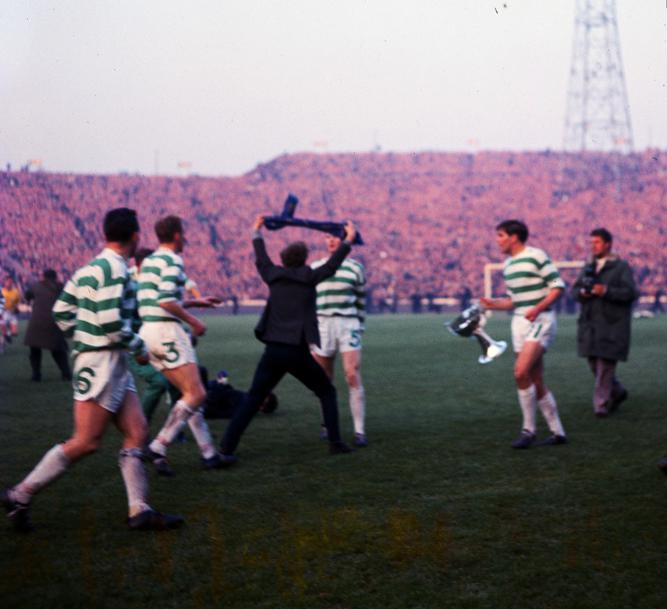 Getting back to the football, it would be a happy Saturday night for the Celtic class of 1965, including Charlie Gallagher. Having waited six years for his first major winner’s medal in senior football, Charlie had now secured two in just six months.

And with two of the major domestic honours now secured, the next target would be the title.

Thanks, as always, to the folk behind the Celtic Wiki, a wonderful source of information, and to David Potter, author of Charlie’s biography, Charlie Gallagher? What a Player!

Previous Article12 Nov, 1969, Celtic 3 Benfica 0 – “Their support was fantastic and it was worth an extra man to the team,” Jock Stein
Next Article As a Celtic supporter, I watch Scotland because that football team represents my country and I love football