You are at:Home»Latest»Celtic 3-3 Inter Milan: Memories Of An Incredible Matchday Experience

There may be more important things happening in the world right now and the lockdown measures are in place for a very good reason. Hopefully the vaccine can be a way out of this mess, which has killed many people and made life tough for millions of others. However, alongside those very serious issues, the longing to get back to the football, to European nights and the full experience that goes with it remains.

Attending Celtic matches is not just a hobby for some. The club can be said to be an expression of our culture and identity. Supporting Celtic is about the songs, the atmosphere, the friendships and the social outlet as much as the passion we have for the football match itself. Make no mistake, getting back to Celtic Park fills a big void for many – something we looked forward to week after week. To have that taken away has been a difficult mental battle and the benefits of returning to the football shouldn’t be understated.

To demonstrate what has been lost, and more importantly what we have to look forward to, I rewind to my matchday experience at Celtic Park against Inter Milan. It was more than the 90 minutes in every sense.

Finally it was 19 February 2015. The sound of my alarm clock at 6am signified that it was time to get ready to head to Southampton Airport. I put on my Lisbon Lions shirt and grabbed my green and white bar scarf from the wardrobe. A four provinces flag was folded and left by the bedroom door. I grabbed my Fred Perry dead 60s tartan jacket and went on my way.

A bacon roll and orange juice slid down in the airport, almost as fast as my money was sliding out my wallet – £5.60!

I said goodbye to my family and felt ten feet tall as I went through security, going to see the Celtic again on another big night. I was nice and early so irritated all my Facebook friends with information ahead of the match. “Flight BE552 to Glasgow, please go to gate 7,″ said the announcer. I was booed as I took my seat by a couple of Inter fans, who live down here! Then it was time to board the small propeller plane. The trip had started. 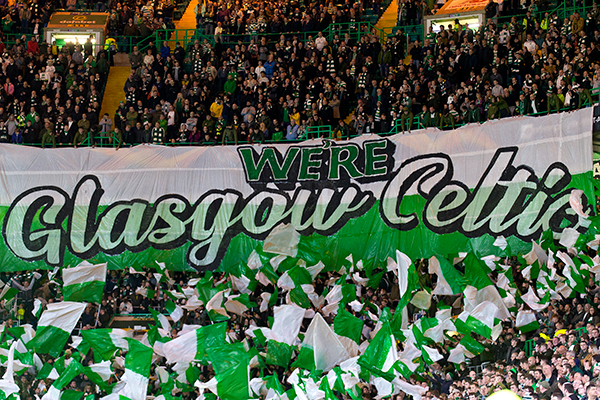 A little over an hour later, I arrived at Glasgow Airport. There, I was greeted by one of my greatest pals, who took me to his brother’s house, where I used to stay on my travels north of the border. Both are fantastic people and we talked Celtic, chatted about my books and had a laugh about recent life events.

My good day was about to get better. It was 4pm and time to make way for The Squirrel Bar in the Barras. Already the place was mobbed. I pushed the door open to a wall of noise: “Open up your hearts and I’ll sing for you this song!” Glasnevin were playing and an intoxicated Celtic support provided vocal back up.

After a couple of pints my friends from Port Glasgow had arrived. I had been looking forward to seeing them as I hadn’t been up since just before Christmas. It was too busy for them to get in to the pub so we went to The Saracen Head. There we got a table and this gave us a chance to have a good laugh and catch up. I was enjoying their company, even if I was being mocked for my “posh” English accent. At that point the singing started in full flow as people roared and thudded the floorboards whilst stories of famine and oppression were retold in song.

The jukebox played everything from God Bless This Lovely Land to the Wild Rover. The songs were sung with gusto, but best of all was You’ll Never Walk Alone. The pub swayed together, scarfs and flags aloft and the pub was rocking. 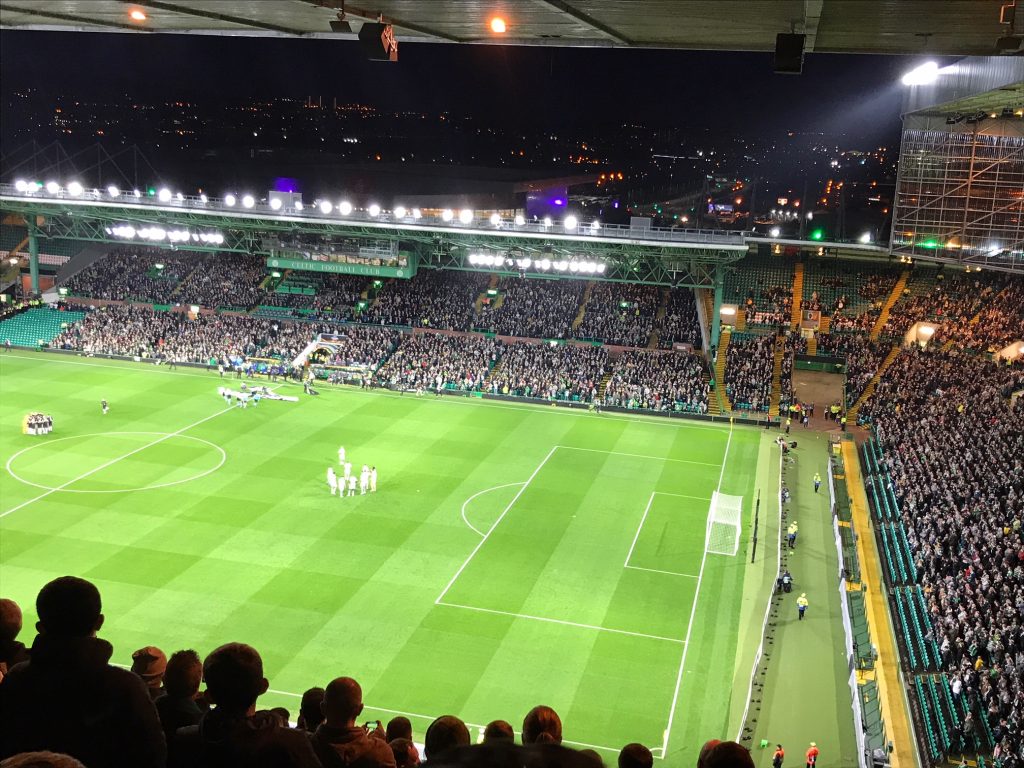 The night was still young so with that start we made our way further up the Gallowgate. After passing all the street vendors selling tricolours and badges, it was on to Kerry’s bar. Some Italians were in the establishment with us and seemed to be in awe of the atmosphere. The pub was mobbed and a band played the full Celtic repertoire. The moment that stood out was a truly electric rendition of 67 Heat of Lisbon, which went on and on for about five minutes and didn’t abate for a second. That was the song of the night, given all the connotations surrounding Celtic and Inter Milan.

A few Magners later it was time to head to Paradise. Or so I thought. How foolish it was of me to think that the past few hours hadn’t provided sufficient drinking time. So it was, we headed to Tesco in the Forge for a last minute drink stop. Others had a similar idea but produced a syringe to inject vodka into an orange so as to continue their drinking incognito during the walk up to ground!

Alas we made way for the Jock Stein Stand just in time for YNWA – my favourite part of a European night at Celtic Park. Everyone to a man had a scarf aloft, the players were in a huddle and the music stopped. The noise was tremendous. What a way to introduce the teams to the park. The Green Brigade then unveiled a huge banner depicting a blank screen on an old television. The screen was peeled away to reveal Stevie Chalmers scoring the winning goal in the 1967 European Cup Final. The referee’s whistle pierced the Paradise air and kick off met with 60,000 people out of their seats screaming the Celtic Symphony.

Two quick fire goals from Inter slightly dampened the mood but there were still loud shows of defiance.

Suddenly, bedlam! It was 2-1 and the atmosphere hadn’t even got going before we grabbed a second. That was just out of this world. I genuinely don’t believe any other club produces these moments. The roof came off. Two of my pals grabbed me jumping about like nutters, us and 60,000 others going tonto in sheer elation. The celebrations were phenomenal. The period from that ball hitting the net to the 45th minute was mad. The stadium shook under the weight of the full ground jumping to Just Can’t Get Enough and The Celtic Song among countless other ditties. The atmosphere was better than anything most European clubs can conjure up. The noise was going right through me and it was just a sound and sight to behold.

But, as ever, we were brought back down to earth when Craig Gordon made a howler right before half time, handing Inter the initiative. Craig had been great for us that season so it was good to hear the entire support sing his name and rally behind him.

The second half was entertaining and things had calmed to the point where we could take in the game a bit more. Every attack was met with an intense roar and there were a few bursts of song in patches.

Then, when all seemed lost, the ball was looped onto the chest of John Guidetti inside the box. As he swiveled, Parkhead held it’s collective breath. “YAAAAAAAASSSSSSSSSSSSSSSSS!” I was hugged by one of my friends and cuffed round the lug by the other. People weren’t just celebrating a goal, they were going off their nut!

I fell into the man next to me before being pulled back towards the other direction and then falling onto the concourse and narrowly avoiding the metal bar in front. I could make out a few bodies flying down the rows. My friend said: “I wish you could bottle up these moments because they take you to another place!” He couldn’t have been more correct.

We stayed in the ground some ten minutes after the game before it was finally time to leave. I headed for Parkhead Cross laughing at the fist pumping and scarf twirling going on around me. My dad phoned me from home and said he had watched it on TV. He thought the game looked great but went into a rage about Steve McManaman saying we were embarrassing for celebrating a last minute equaliser.

I went back to the place where I was staying and spent the Friday chilling out with my mate’s family. At the weekend I flew home, still on a high. Other friends down here were off to Milan for the return leg a couple of weeks later. They weren’t so fortunate with the result, but enjoyed themselves as ever.

It’ll be great to have these occasions back.

Previous ArticleMajor blow for Celtic as key defender set for up to nine months out
Next Article Celtic, Ryan Christie and why a parting of the ways suits both parties