Willie Maley’s Scottish champions had ended August with a last-day goal blitz against Third Lanark at Celtic Park, John Divers scoring four as the Hi Hi were on the receiving end of an 8-1 hammering in the replayed Glasgow Cup first-round tie, the sides having drawn 1-1 a fortnight earlier at Cathkin.

It was the perfect response to the shock 2-1 home defeat by Aberdeen the previous weekend and set things up nicely for that Saturday’s critical League clash with last season’s runners-up, Hearts, at Tynecastle.

There were just under 50,000 fans packed into the Edinburgh ground to witness the eagerly-awaited meeting of Scotland’s top two, with thousands more locked out and the crushing forcing spectators onto the track.

Just eight months earlier, Celtic’s stunning comeback in the capital to secure a 4-2 victory had been pivotal in securing the title that season. The stable nature of football in those days is perhaps reflected in the fact that the Celtic side showed only one change from that January win, the legendary Jimmy Delaney replacing Joe Carruth on the right flank, as the visitors lined up as follows:

Hearts had started the season well, recording home and away 4-1 wins over Third Lanark, either side of a 6-2 Tynecastle thrashing of Falkirk, before coming a cropper at Firhill, losing 3-1 to Partick Thistle as the Bhoys were going down to the Dons across the city.

With Celtic having also drawn at Rugby Park, they trailed their opponents by one point going into the match but seized the early initiative as home goalkeeper Waugh allowed a weak effort from MacDonald to trickle over the line within four minutes.

The scores were level in the tenth minute, when Hearts inside-left Black netted following a free-kick, and remained that way until just before the interval, Murphy benefitting from good work from Delaney and Crum to beat Waugh with a low shot for 2-1. The early part of the second half saw Kennoway injured in a collision with the Hearts goalscorer and replaced in goals for a spell by wing-half Paterson. Celtic’s constant flow of attacks were finally rewarded in the closing fifteen minutes, as first MacDonald headed home then Divers made it four. In the closing stages, Crum put the icing on the Celtic cake with a fifth, as the champions sent out a chilling message to the chasing pack. 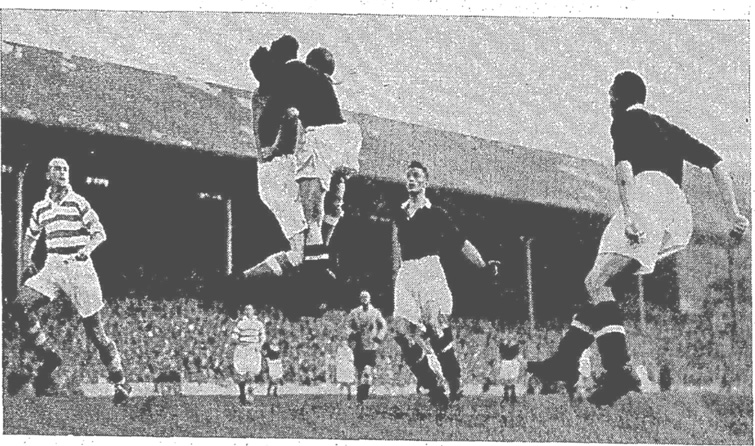 CLICK GREEN NEXT BUTTON AT TOP TO CONTINUE TO NEXT PAGE…

Showing 1 of 3
Next
Previous ArticleClassless Cluj? Damaged Dressing Room rumoured response – ‘We’ll pay it from the Champions league money’
Next Article Petrescu in illness mystery ahead of Return to Paradise