You are at:Home»Latest»Celtic and Ireland Legend Charles Patrick Tully, Turning on The Style

Charles Patrick Tully…turning on the style

Celtic’s long unbroken history is littered with characters and events which stagger the mind, some of which if submitted as text for a fictional story would be rejected as too far-fetched. Today marks the 68th anniversary of one such occasion.

The scene is Brockville Park, Falkirk and Jimmy McGrory’s Celts are in town for the Scottish Cup third-round tie with the local favourites, as the prestigious competition reached the last 16 stage.

Celtic had commenced their quest to reclaim the trophy last won in 1951 against Motherwell with a visit to Eyemouth in the Scottish borders on Saturday, 24 January 1953, striker John McGrory bagging all four goals in a 4-0 victory. 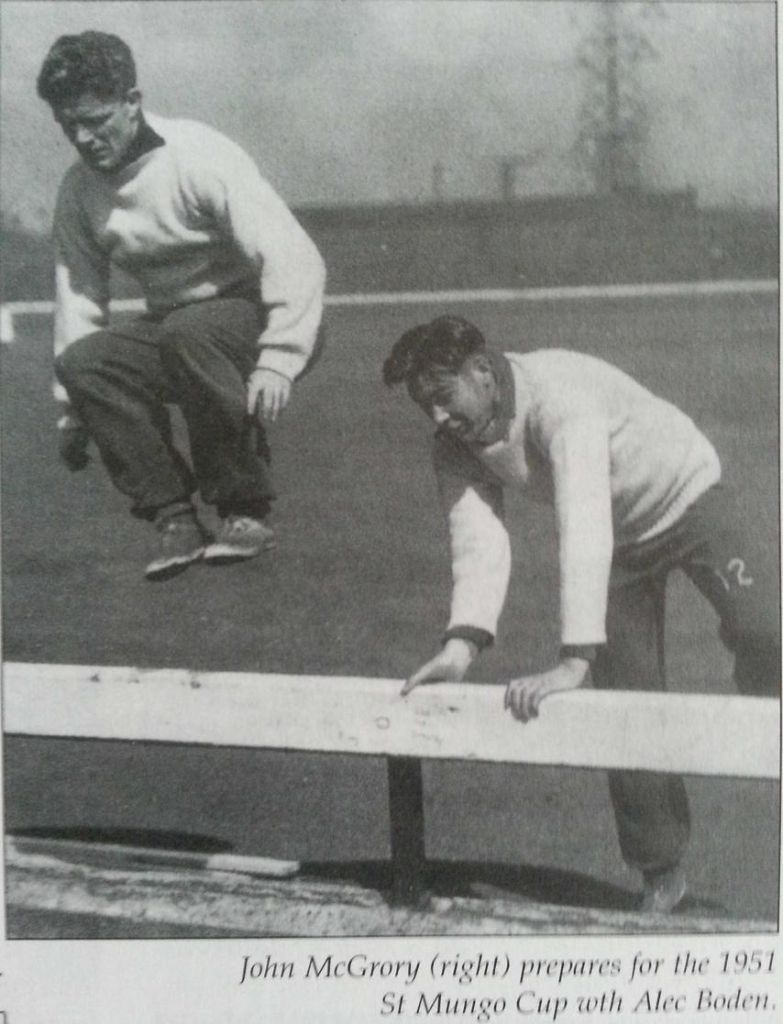 Two weeks later, McGrory was again on target, one goal being given and another controversially disallowed as Celtic continued their record of never having won a cup-tie at Stirling Albion’s Annfield ground, a late equaliser from the hosts forcing a midweek replay at Celtic Park. There was further disappointment for Celtic, as skipper Sean Fallon suffered a further injury to the arm he had recently broken. He had only returned to action the previous Saturday and would now be sidelined until the end of March.

A crowd of just under 25,000 in the east end for the replay would see Fallon’s replacement Bertie Peacock score a second Celtic goal, sandwiched between a John McGrory double in a comfortable 3-0 victory, setting up the third round-tie with Stirlingshire neighbours Falkirk. Cup fever drew an all-ticket crowd of 23,100 to Brockville on Saturday, 21 February 1953, a ground record which stood until Falkirk left 50 years later. Amongst those was my father, and what happened over the following couple of hours would never be forgotten by him or anyone else fortunate enough to witness events. 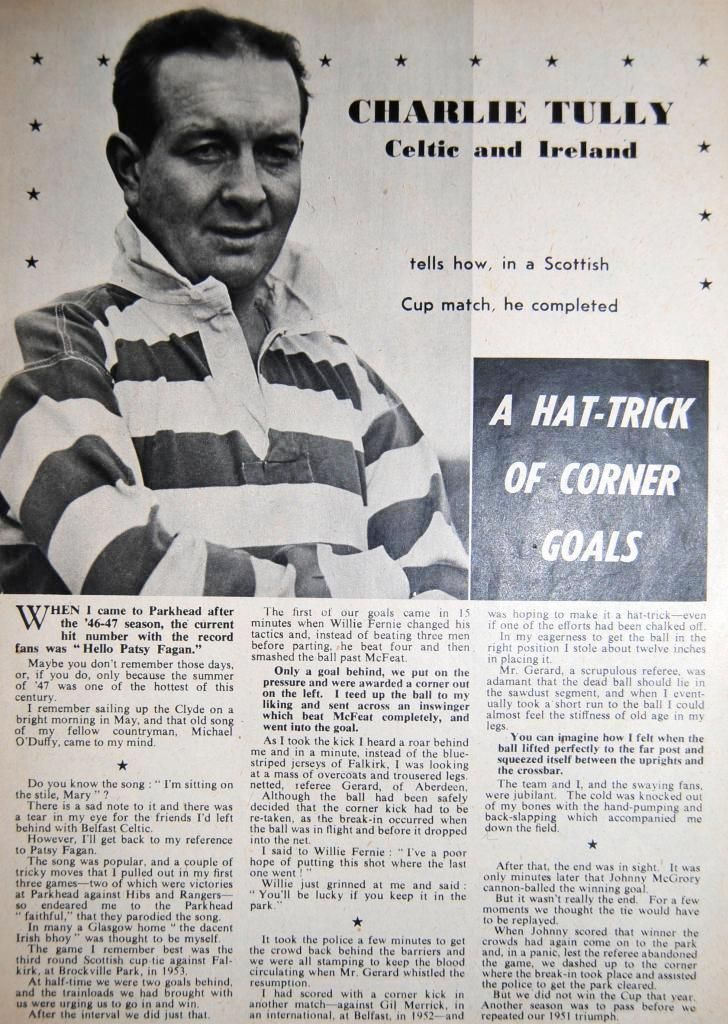 The home side featured two former Celts with their own place in the club’s history. Outside-right Jock Weir had moved to Parkhead from Blackburn Rovers in February 1948, and two months later he would score a hat-trick in the final League match of the season at Dens Park to secure not just a 3-2 victory on the day but to eliminate any possibility of Celtic being relegated from the top division, thus ensuring the club’s proud record of being the only club to play in the top-flight since the introduction of Scottish League football in August 1890.

Two years before Jock Weir’s arrival in Glasgow, Jimmy Delaney had left Celtic to join Manchester United. The Cleland Bhoy remains one of Celtic’s most revered sons, following a 13-year career which saw him star on the right flank in those fabulous sides which won the League title, Scottish Cup and Empire Exhibition Cup in the years leading up to the Second World War. Both men would line up against their old club at Brockville in February 1953, centre-forward Weir opening the scoring within five minutes before Campbell made it 2-0 shortly afterwards.

Still trailing by two goals at the interval, the second half is the stuff of Celtic folklore. Eight minutes after the restart, Charlie Tully took a corner kick and curled the ball over goalkeeper McFeat to start the comeback…or so he thought. Charlie’s joy was short-lived as referee Gerrard – I know – ruled that the crowd had encroached onto the pitch before the ball crossed the line. Tully had managed the feat playing for Ireland against England in Belfast the previous year (YouTube footage is below), however, presumably he thought his chance to repeat the rarely-achieved piece of footballing wizardry had gone.

But we’re talking about Charles Patrick Tully here, that darling son of Ireland so beloved by those with Celtic in their hearts. Nothing was beyond him. As Tully placed the ball just outside the arc to retake the corner, he was instructed by the referee to move it back inside, which he duly did.

The bold CPT then proceeded to curl the ball back over McFeat into the net once again! Cue bedlam as on came the support again. With order restored, there would only be one winner, as the greatest cup side on the planet roared on by the most passionate support in the world blew Falkirk away. Another football genius, Willie Fernie, headed the Bhoys level on the hour, with the prolific John McGrory then sending a rocket past the shellshocked McFeat for the winner as we approached the 67th minute, the Celts moving into the quarter-final of the Scottish Cup on this most astonishing of afternoons.

The Celtic side on that never-to-be-forgotten day was as follows:

Elsewhere in the competition that day, cup-holders Motherwell and Aberdeen would share no fewer than 10 goals at Pittodrie, with the Dons then inflicting a 6-1 defeat on the Steelmen in the Fir Park replay. 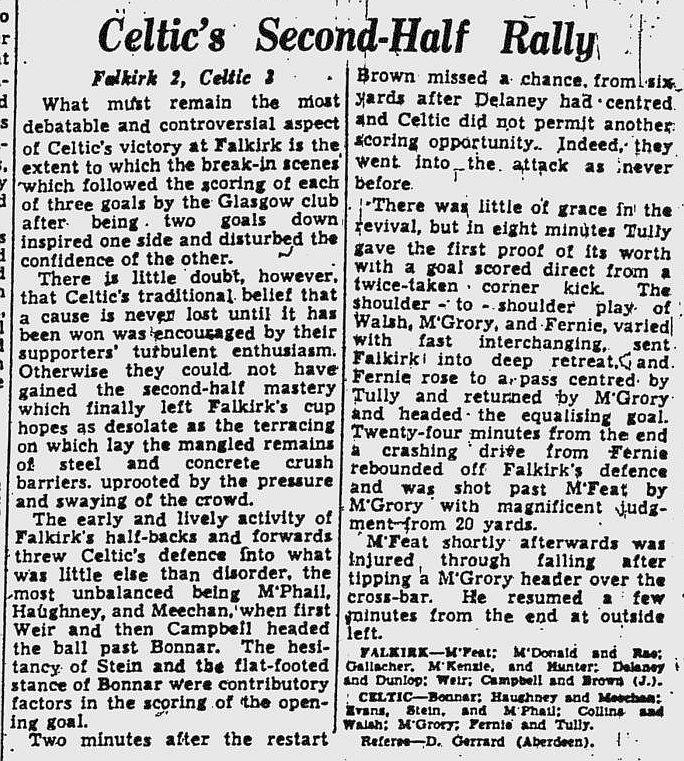 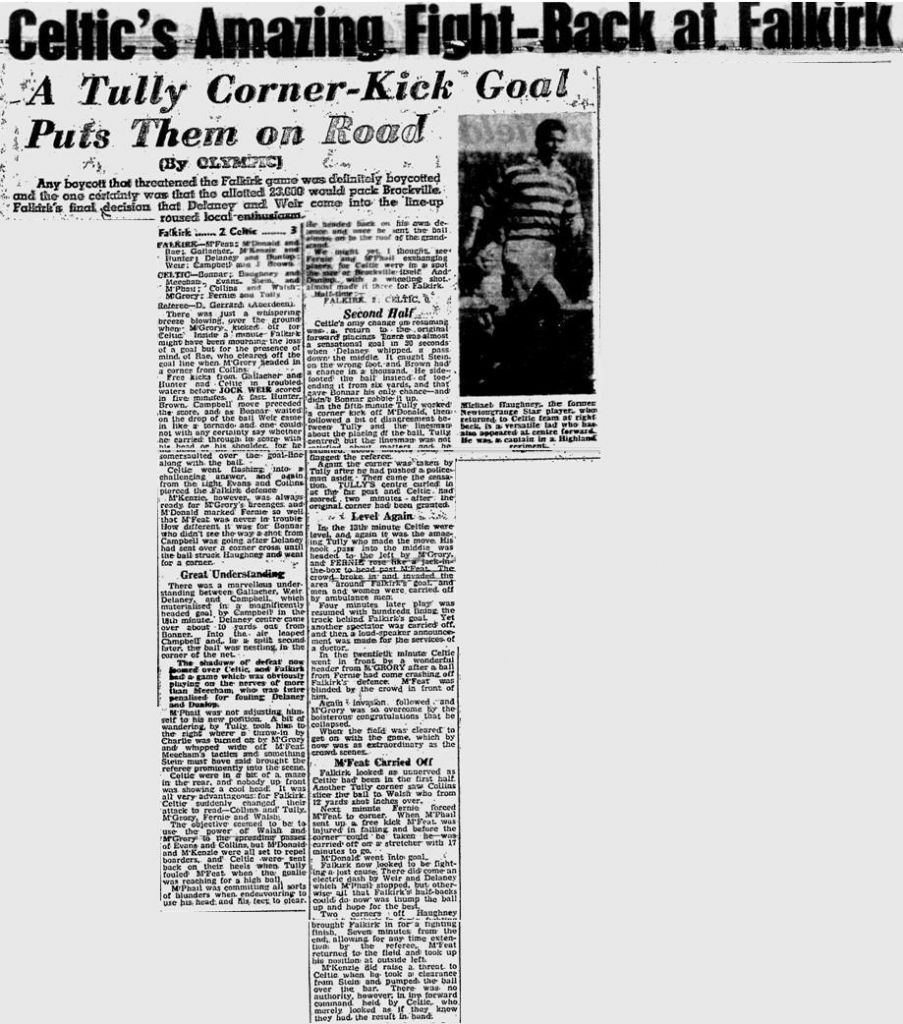