You are at:Home»Latest»Celtic and the World Cup – Sweden 1958

The World Cup Finals tournament of 1958 was held in Sweden, as the world got a first look at a 17-year-old Brazilian superstar, Edson Arantes do Nascimento, nicknamed Pele. As in Switzerland four years earlier, there was representation from Celtic at the Finals, this time both in the emerald green of the six counties and the navy blue of Scotland.

1957/58 had been a rollercoaster season for the Hoops. There was the euphoria of Hampden in the Sun in October, with a magnificent seven planted behind Niven in the Rangers net, as the first League Cup triumph of the previous year was repeated in some style.

That had come hard on the heels of a first League victory at Ibrox since 1935, however, a dreadful sequence of home results, with only one win from our opening ten games, put paid to any title challenge.

Celtic would finish in third place, a distant sixteen points behind runaway Champions Hearts, with their ‘Terrible Trio’ of Alfie Conn senior, Willie Bauld and Jimmy Wardhaugh running riot to set a new scoring record of 132 for the season.

Local rivals Clyde finished four points behind Celtic in fourth spot, knocking the Bhoys out of the Scottish Cup in March in front of 65,000 at Celtic Park in what was their home game. The venue change was due to safety concerns, following the Shawfield League meeting just three months earlier, where a boundary wall collapsed, tragically killing a 12-year-old boy. Clyde would go on to win their second Scottish Cup in four years, beating Hibernian in the Final.

This was also a period of real transition for Celtic. Bertie Peacock had replaced Bobby Evans as captain and some of the heroes of the Coronation Cup and Double teams were fading, with Jock Stein retiring to take up the mantle of Reserve Team Coach and stalwarts such as Haughney, McPhail and Bonnar departing the scene.

They would soon be joined by Bobby Collins, sold to Everton in September to begin a remarkable career south of the border, then the genius Tully, whose appearances became less frequent until his release in 1959. In came the Cubs, as the seeds of Lisbon were sown, with Auld, McNeill, Gallagher, Clark, Chalmers and Fallon joining the fray, together with early-60s regulars, Haffey, Crerand and MacKay.

Whilst, sadly, Charlie Tully was excluded from the travelling party, having made the initial squad list, Coleraine-born legend Bertie Peacock lined up with his Irish colleagues in Group 1, together with holders West Germany, Czechoslovakia and Argentina.

The Irish had earned the right to take their place in the finals the hard way, by eliminating both Portugal and Italy in the qualifiers – losing only in Rome – then overcoming political opposition at home to the prospect of Sunday football.

The return fixture against the Italians, at Windsor Park in December 1957, was memorable for all of the wrong reasons and would be later referred to by Bertie himself as the ‘Battle of Belfast’.

The Hungarian match referee was stranded in fog and failed to reach Belfast in time. With the Italians refusing to accept the option of an English or Irish referee and 35,000 fans in the ground, the game was played as a ‘friendly’. However, the ensuing 2-2 draw was a nasty affair and ended in mayhem, as thousands of angry fans invaded the field in an attempt to get to the Italian players.

The match was replayed six weeks later, in January 1958, the Italians needing only one point to qualify but failing to recover from a two-goal first-half deficit to exit the tournament. It would be another sixty years before the Italians were eliminated from the World Cup prior to the finals, ironically by Lustig’s Sweden. 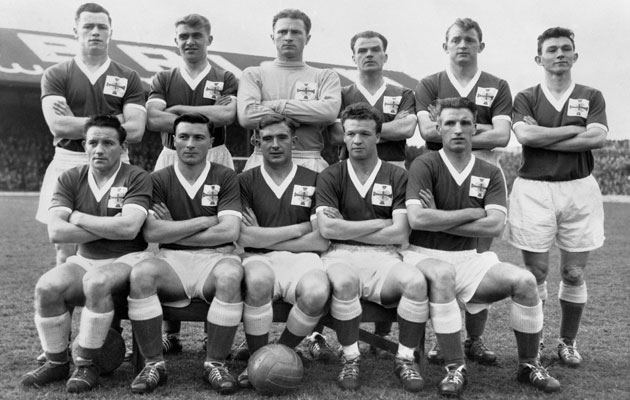 Their respective fates would differ greatly. Defender Jackie, younger brother of Irish captain Danny, never played again, whilst Harry Gregg, who had displayed tremendous courage in Munich, had recovered sufficiently to take part in United’s FA Cup Final defeat in May against Bolton at Wembley and would demonstrate that bravery again in Sweden, to be voted goalkeeper of the tournament.

Gregg was at his best in the first group game, in Halmstad on 8 June, lining up behind Peacock against a Czech side featuring Josef Masopust. The legendary midfield general would score in the 1962 World Cup Final, before being voted European Player of the Year, later captaining the Dukla Prague side defeated by Celtic on the road to Lisbon.

However, the Irish had their own secret weapon, producing a PR master stroke by adopting a young local boy, Bengt Jonasson, as their interpreter and mascot for the tournament. The publicity and support generated from this gesture ensured a virtual home match for the Irish against the highly-rated Czechs, a single goal from Leeds striker Cush giving them an unlikely victory.

Halmstad was again the venue three days later, when the Irish took on the much-fancied Argentinians, with Bertie again at wing-half beside Danny Blanchflower. However, this would be a very different day and despite an early goal from Villa striker Peter McParland, three strikes either side of the interval bought a comfortable first win for the South American side.

The roadshow then moved south to Malmo, for the final group game against the holders, West Germany. McParland, hero of the 1957 FA Cup Final against Matt Busby’s fated Babes – six of the team would perish in Munich with a further two careers ending on the runway – was again on fire, twice putting the Irish in front with far-post finishes, with only a brilliant late equaliser from Hamburg legend Uwe Seeler, saving the blushes of the Germans.

With the holders through and Argentina eliminated, it became a straight fight with the Czechs for the remaining quarter-final slot, with a play-off scheduled two days later, again in Malmo. The Czechs struck first and early, through a Zikan header, before McParland took centre stage again, equalising before half-time then volleying the Irish ahead in extra-time. That goal, his fifth of the competition, would be enough to secure an historic win, however, it was a bitter-sweet evening for the ‘Little Ant’ Peacock.

He saw his ‘goal’ ruled out in the final stages of the game before being badly hurt in a collision with his own goalkeeper, Uprichard, replacing the injured Gregg and himself struggling with a lame ankle and broken hand, rupturing Bertie’s knee ligaments.

The Celtic captain’s World Cup was over, he would miss the heavy quarter-final defeat by France, two days later in Norrkoping, with the formidable duo of Raymond Kopa and Just Fontaine inspiring Les Bleus to a 4-0 win, the latter netting a double on his way to setting a record goals haul for finals tournaments of 13, which still stands to this day.

Like the Irish, Scotland were unexpected qualifiers for the 1958 Finals, finishing ahead of favourites Spain and ‘54 quarter-finalists Switzerland to win their group, thanks mainly to the goals of Blackpool striker Jackie Mudie. There were three Celts in the 22-man squad selected for Sweden, Bobby Evans and Willie Fernie, in their second Finals, joined by Bobby Collins.

Due to the continued absence of the recovering manager Matt Busby, team selection was down to an SFA committee, with trainer Dawson Walker carrying out dressing-room duties. The Scots were drawn in Group 2, with France, Yugoslavia and Paraguay, opening against the Slavs in Vasteras on 8 June. Both Collins and Evans started, with a header from Hearts’ Jimmy Murray, Scotland’s first goal in a Finals tournament, earning a creditable draw after an early Yugoslav strike from Petakovic.

In the opposition defence that day was Vojvodina’s Vujadin Boskov, who would be at the helm some nine years later when the Novi Sad side lost to Celtic in the quarter-finals of the European Cup, also winning trophies in Holland, Spain and Italy in a colourful and distinguished managerial career.

Three days later in Norrkoping, that promising start was undone with a 3-2 defeat to unrated Paraguay, in the best tradition of Scottish World Cup performances. All three Bhoys featured, with Collins becoming the first Celt to score in the Finals when he pulled a late goal back with a fine shot. Having lost another early goal, Mudie had bundled an equaliser over the line midway through the first half, before two further Paraguay strikes took the game out of Scotland’s reach.

So everything depended on the last group match, against France in Orebro on 15 June, with Willie Fernie dropping out of the starting eleven. The French team was based on players from champions Stade de Reims, finalists in two of the first four European Cups, plus the great Raymond Kopa, who had left Reims to join conquerors Real Madrid. 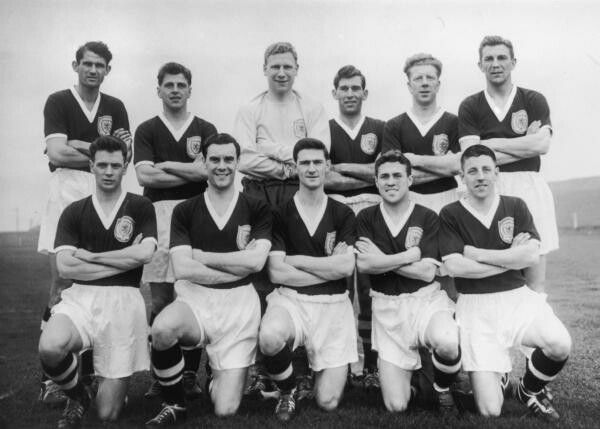 It was Kopa who struck first, as for the third game running, the Scots shipped an early goal. John Hewie then hit the post with a penalty kick, the French response being swift and merciless, Fontaine adding a clinical second before the interval. A solitary second-half counter from Baird was not enough to stop Scotland’s elimination from the tournament at the first hurdle.

Both France and the Irish group winners, West Germany, progressed to the semi-finals, where they would lose to eventual winners Brazil and hosts Sweden respectively, the French taking some consolation from a third-place finish, thanks to another 4-goal flourish from Fontaine.

For the defeated Scots, there would be a long 16-year wait for the next qualification, with the Irish requiring a further eight years, before the adventures of Spain 1982 would ease the pain.

Previous ArticleComings and Goings, Two Celtic targets ‘jet in’ tomorrow, as the Exodus begins
Next Article Jim Craig – Stubbs and Larsson score at Ibrox in 2-2 draw